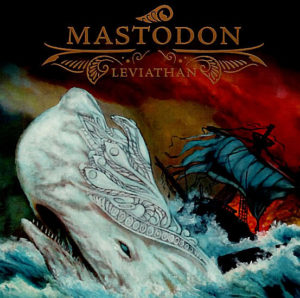 How do you take a Herman Melville novel about whaling and make it into one of the greatest metal records of all time? You wouldn’t even need the album art, the song titles, or the wave sound effects to know the record is set in–and more horrifyingly, under–the water. Channeling inspiration from Moby Dick, Leviathan stands alone at the pinnacle of a lengthy list of achievements for Mastodon.

“Blood and Thunder” and “I Am Ahab” don’t even give you a chance to grab a beer and sit down. “Seabeast” starts to turn that azure water into a churning, blue-green punchbowl of verses and drum fills. “Island” grabs your flailing legs and pulls you under at about 20 feet per second. “Iron Tusk” slams you into the body of the catodon, begging to survive the battle that ensues. “Megalodon” hunts you from just below the surface, allowing you to see the fate you cannot escape, only to throw you overboard into a swirling whirlpool of blood and terror. “Time is coming to feed and knaw…Save yourself, don’t wait on me” as “Naked Burn” thrashes what remains of your consciousness until you submit to “Aqua Dementia.” “And God will watch you burn” in the water, as you are finally taken down with your “Hearts Alive.”

Leviathan is Mastodon. To have this be your second full-length album could be a career-ending curse to many, many bands. Instead, Mastodon thrust their collective harpoon into the sky and struck it down on the crooked brow of the metal world. It still stands as their apotheotic achievement and set the bar in the stratosphere for the next decade of heavy metal.

Chris’ counterpoint:  You will get no argument from me because Leviathan is also my clear cut #1.  I have a deep personal connection to this album being that it was the first album where “extreme” music really clicked for me, so I’m obviously biased, but it has stood up remarkably well over the years which is much more than I can say for a lot of albums that were instrumental to me at other points in my life.  Without a doubt one of the most important releases in the history of modern metal, and one that the cool kids will still be talking about 30 years from now.

There it is! I welcome any and all comments about the order presented and its validity. Fire up your own rankings and post them below. Good luck!