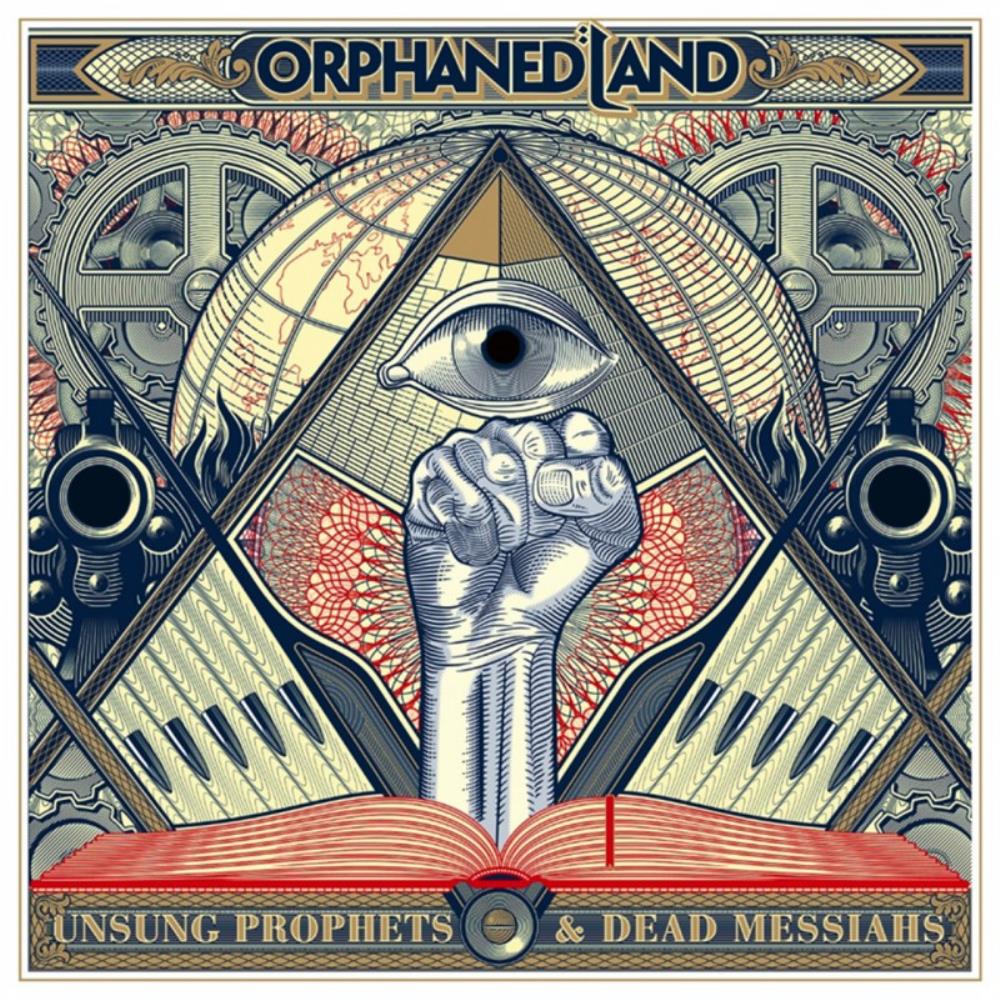 Orphaned Land is an exciting band. They managed to “break” that oriental barrier to enter the western realm of music with oriental metal. That is commendable. I am following the band since their first album, Sahara, and the improvement of their music is tremendous. After their hiatus status, they returned with Mabool, arguably a masterpiece, and had shown the world the change in their music. Their death metal roots melded into a melodic, crossover of power-progressive metal and oriental tunes. Since Mabool, the band is refining their style, looking for perfection.

Unsung Prophets & Dead Messiahs is no exception; it follows the traditional path, the second generation of Orphaned Land, focusing more and more on Kobi Farhi’s clean vocals. As a Mabool fanboy, I was excited the moment Kobi Farhi posted the album artwork on his Instagram. First thing first; the album artwork created by Valnoir is impressive, and it immediately pulls you into the realm of Orphaned Land as their best cover art to date.

That said, how things are faring for Unsung Prophets & Dead Messiahs? First of all, some songs will hook you from the very beginning, especially with their perfect balance of oriental vocals and western power metal roots (Blind Guardian like to be exact). Kobi Farhi’s singing is fantastic on this album, hitting that secret weak spot of emotions everytime he goes to high-pitch. Songs like “The Cave” and “Like Orpheus” are great examples. Having Hansi Kürsch of Blind Guardian as a guest on “Like Orpheus” is also a sign of their tastes in music and composition. Steve Hackett, Tomas Lindberg are two other guests on the album. If you liked the musical “way” Orphaned Land paved since Mabool, you will probably love some of the songs as they are showcasing the perfect refinement of the approach. And then, there are the Eastern songs. Now, I am from Middle-East, so I know a bit about oriental music. The problem is that, although it “sounds” intriguing and fresh to some western ears, it may quickly become boring and overdone. Unsung Prophets & Dead Messiahs suffers from an imbalance of oriental music. I understand the roots of Orphaned Land and the need to show these origins, but the scales are off. Myrath’s Legacy (2016) was a great example of how to balance the scales utilizing power-prog metal and orientalism.

The second and a more significant problem is the absence of Yossi Sassi. The album is lacking the guitar work, necessary licks (or not, a personal taste), mesmerizing solos, etc. “My Brother’s Keeper” is a refreshing change for that, but the majority of the songs lack the ax if you know what I mean. I still remember the first time I have heard “The Birth of the Three.” Sadly, there is nothing like that to be found here. Now, I am not saying that Idan Amsalem is a bad guitarist. I saw them live in Toronto a few months back, and the band was great on stage. It is just; Orphaned Land still needs some time to get accustomed to this new line-up. After all, having a new guitarist can always work for the better (like Grave Digger), or for the worst (like Rage). It feels like Yossi Sassi’s contributions were a big part of the composition process (no brainer), especially when you listen to his solo albums.

All in all, I believe any Orphaned Land fan would enjoy the album. Songs like “The Cave,” “Chains Fall to Gravity,” “Like Orpheus,” “Take My Hand,” “My Brother’s Keeper” are incredible additions to the Orphaned Land roster. That said, the rest of the tracks bored me, to be honest. I found myself repeating the first bunch, while constantly skipping the rest. That is not a good sign.

And a side note would be to suggest experimenting with new lyrical ideas may be a fresh change for the band. Orphaned Land has a mission to bridge nations, I understand that, but now and then, bands do get tired. Again, I am from the Middle East; I lived there for 35 years. I know how torn and derailed the geography is.