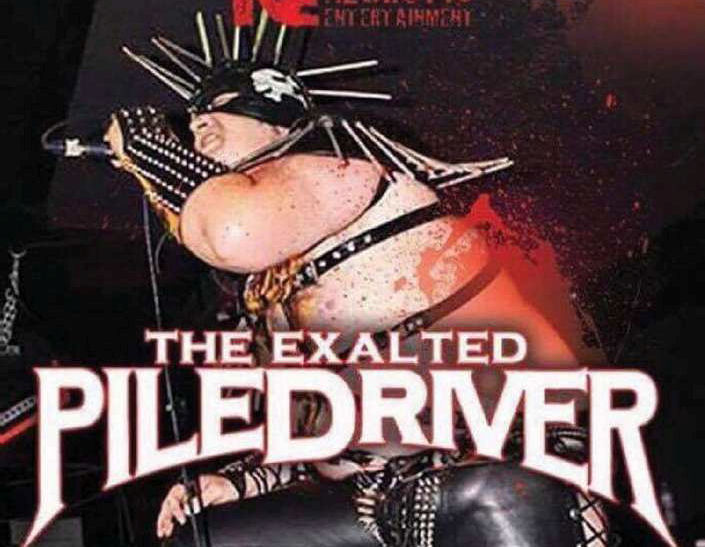 If you’re a metal head in the Greater Toronto Area, and you want to party on a Saturday night, the Coalition T.O (282 Augusta Ave.) is one of the venues you’d seek; they get good bands, the sound guy is on point, and the staff rocks. This New Years, many of us, the humble (and not so humble) Toronto area metal heads, were lucky to find ourselves at a Neurotic Entertainment event (a promotions company you’d want to follow if you’re a metal fan in the GTA).

Tonight on the bill are the The Exalted Piledriver, Maltida, Sex Master and Doors & Fours. 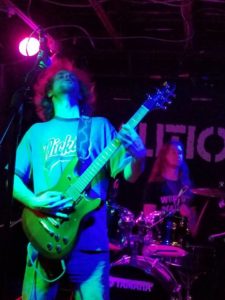 I’ve seen these rocking Hamilton rockers before, and tonight this three piece were doing a mostly Misfits set; band leader Adam Peach is known in the scene from his guitar work with Toronto thrashers AxMinister, and his own band Python.

I felt bad for the drummer Cody Mcaleney, as he was filling in for the night, and it was obvious the decision was last minute. Cody handles the skins for Hamilton area’s Lutharo (they kick ass), he’s a sick drummer, and is superbly entertaining to watch, spinning sticks and making faces etc, but tonight was a train wreck, unfortunately. They tried recovering, but the steam was pulled out from underneath them early, and when they had the chance to recover with crowd favourite “Die Die My Darling”, they lost their place, the drummer stopped playing, and for a brief moment the band was like a deer in headlights; they gracefully finished the song and by the end it was a horror show; such an outing is unusual for Adam, it sucks, but the show goes on. 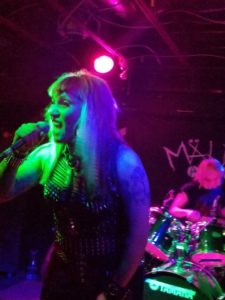 I had no idea what to expect with this band, but I trust Karina Davy (the vixen promoter behind Neurotic Entertainment) to bring together good bands, and I was not disappointed. These guys were one of the highlights of the night; post modern neo-punk, where spiked and green-haired band leader angrily screams at you in Spanish with a demon effects laden voice.

The drummer was solid with mannequin like mannerisms, and a visage similar to Yolandi from Die Antwoord, adding to the whole Mad Max feel to the band.

They were fast and tight and made you want to mosh. They also felt relevant; theirs is an angry truth uninterested in what you have to say, so you listen. And mosh. 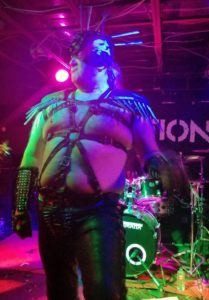 Piledriver was a Toronto band in the mid 1980’s; they released 2 thrash albums with classic songs, then faded into obscurity. In 2008, their leader Gord ‘Pile Driver’ Kirchin got new troops, and relaunched the act as The Exalted Piledriver, started gigging and released an album.

This is the third time seeing these guys live, last time being when they opened for Annihilator last year at the Opera House in Toronto; they have great songs, are usually tight, and tonight they were playing their most popular album, Metal Inquisition, in its entirety.

A well organized event, the band got on at midnight and did the countdown with the crowd.

The S&M clad front man’s shtick is to dress like a freak and be a prick, and it works. They open with a personal favourite “Death by Guillotine” and just keep on going. The guitarist Steve MacPherson also duties the ax in Spewgore, another awesome Toronto thrash band; guitarists have a saying in Brampton ‘be like Steve MacPherson!’ 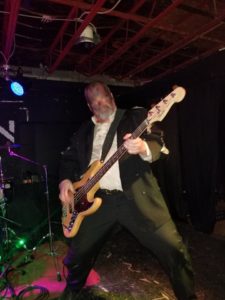 They belt out classic songs, with an awesome disgusting and hilarious live show; I like to get close to the stage sometimes, especially with songs like “The Executioner” or “Sex with Satan” playing, though when I got close, I immediately realize I’m only a few feet away from a half naked fat guy, elevated by a two foot stage, sweaty, hairy, belly, right there; I promptly retreated.

They’re a solid band with memorable songs, he comes off as a prick, and it works, worth seeing every time.

The best thing about the night happened about an hour after what I thought was the last band; the Coalition, the kick ass place that it is, set up what seemed like an impromptu rig up, drums, amps, and a mic, in the middle of the dance floor; the bar busser, Struan Robertson, boy wonder drummer from Toronto thrashers AMMO and other projects, hopped behind the kit (killed it), I couldn’t tell who else was playing guitar, it was dark, he had a hoodie, I was drunk, and Sex Master were on! Not before long, what looked like the lady drummer from Maltida hopped onto the mic, and started belting out in anger, just raw emotion, pure honest metal; at over 2 hours past midnight, 35-50 people circled and moshed to raw unpretentious angry music.

It was magic, it was what I love about our little scene, in our little city.