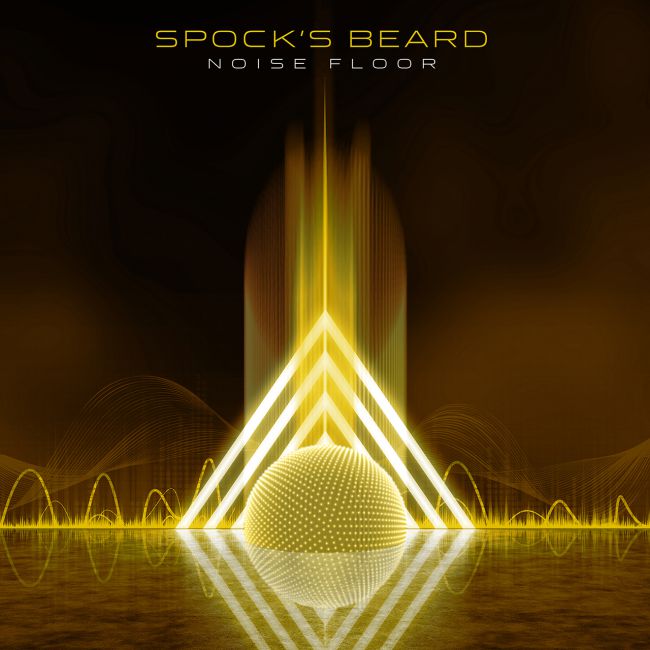 Spock’s Beard. The only time I can think of Nimoy’s monumental character with a beard is this band (and that one episode of ST: TOS.) Another album from the progressive behemoth’s, Spock’s Beard is here. Their 13th album, Noise Floor is coming out in but a few days from this review. By this time, if you are a Spock’s Beard fan, you should know what to expect: A progressive rock extravaganza.

Ted Leonard is the first high point of this new disc. The Enchant frontman is with Spock’s Beard since 2011, and boy he can deliver. The vocal melodies that help you to navigate through the complexity of the infrastructure kicks in right from the start with a typical Spock’s Beard hit, “To Breathe Another Day.” Now that Leonard is comfortable with the merging process, he is also contributing to the compositions. That’s excellent news for Spock’s Beard. When I check the line-up, I also see that Nick D’Virgilio is back on the drummer’s seat. His technicality paired with soft drumming gives nothing but a pleasure to my ears. As the press-kit suggests (and thank you for sending one, Inside Out, unlike many other labels), D’Virgilio will not be able to tour with the band due to time constraints. Still, his contribution is invaluable to the sonic structure of the album.

Ryo Okumoto, the epic keyboardist, had said the album would be more accessible than the previous one, The Oblivion Particle. This approach shows both in the melody structure of songs, as well as the duration. Unlike most of the Spock’s Beard discs with epic-long tracks, the album limits the durations to some eight minutes. That is good news from an accessibility point. Noise Floor comes with eight tracks and with a second disc having another four, titled as the Cutting Room Floor EP. Rather than having too many songs in one place, it was the right call to separate the album. Even though they play one after another, the mind plays tricks on you, and you listen to them as two different products.

One thing that Spock’s Beard does admirably is they never pay much attention to the market demand. Their instrumentation, usage of classical instruments mashed with avantgarde synth sounds is ever present. Tracks like “Somebody’s Home” or “Have We All Gone Crazy Yet” are good examples. Their “we don’t take the market too seriously” attitude also shows in their music video for the opening track.

So, some tracks to check: The opening track, “To Breathe Another Day.” “Somebody’s Home” with its great acoustic-classical-old school heavy metal mix. “One So Wise” with its subtle mood shifts and a crazy mid-late instrumental section. “Box of Spiders” being the new insane song of progressive rock/metal after “Dance of Eternity” by Dream Theater.

Spock’s Beard is an old band with twenty-five plus years under their belt as a third-wave progressive rock giant. However, it is never late to dive into their creative, somewhat crazy world. If you are into other progressive rock acts like King Crimson, YES, Genesis, Camel (and many others), you will see that the tradition carried on with these gentlemen. Oh, I also have to say, after listening to Spock’s Beard for a week, I dug my Cowboy Bebop archive to enjoy the epic work of Yoko Kanno. Whenever I hear Ryo Okumoto, I end up listening to Kanno. And, vice versa. Maybe it’s just me. Great artists!