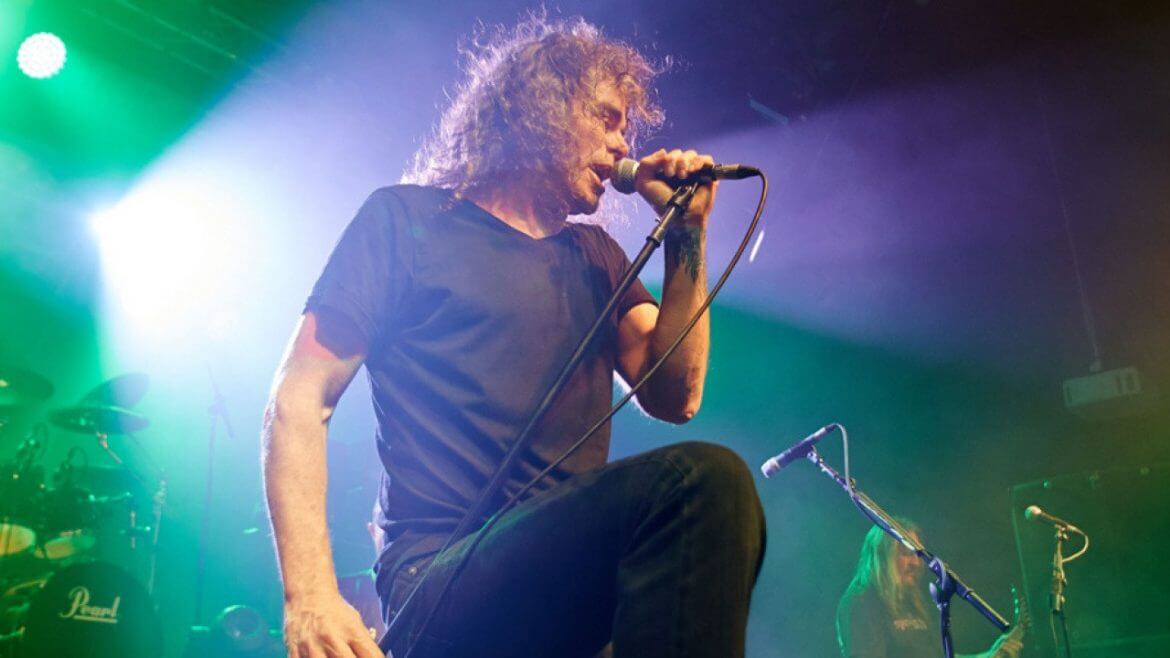 New Jersey’s Overkill enters year 37 of its storied career with a powerful new album, The Grinding Wheel. The record is one of the band’s most diverse in recent memory, and it reflects the band’s roots and influences while remaining relevant in a modern era of thrash metal. Founded in 1980 by frontman Bobby “Blitz” Ellsworth and bassist D.D. Verni, Overkill has been one of the genre’s most enduring and consistent contributors. The current line-up, which also includes drummer Ron Lipnicki and guitarists Dave Linsk and Derek Tailer, has been solidified since 2005. This week, Metal Nation connected with Bobby Blitz to talk about Overkill’s new record, the 30-year anniversary of the band’s sophomore album, and his thoughts on the Hall of Heavy Metal History.

Overkill year 37, album number 18; The Grinding Wheel indeed rolls on and on.

I think so. I think we have something special here. Knowing me now for some time, you know that excitement is part of the equation with me, but this is genuine excitement about this record. There’s great production. There’s a great amount of diversity on this record. A great amount of thrash energy. Influences that cover rock and roll, punk, groove, epic feels, the New Wave of British Heavy Metal, classic heavy metal…So I think we got something that for some reason, came out of us as something special and something people will remember.

Agreed. To my ear, The Grinding Wheel is a more diverse record than 2014’s White Devil Armory, which was more thrash-centric, if you will. Tell us about the record from your perspective.

To say it’s diverse is one thing, to hear its diversity is another. For instance, a song like ‘The Long Road,’ I could feel where it was coming from was days-gone-by. The key here was to grab that vibe of the New Wave of British Heavy Metal, inject the Overkill energy; give it a fresh coat of paint, and a face for 2017. So when we started getting those feels, like ‘The Long Road’ being this way, ‘Goddamn Trouble’ having a funky feel to it, some rock and roll in ‘Let’s All Go to Hades,’ it seemed to me we started to push them farther and farther away from each other with regard to not necessarily presentation, but celebration. I think, at the end of the day, putting the Overkill stamp on it and the energy, this is what gives a record its cohesiveness. Something where each song works off of each other, but each song is individual unto itself.

Lyrically you always hang on to thoughts, words, ideas that develop between records. What were some of the ideas of issues that were still resonating with when you started writing for this record?

You guys, as you always do, wrote another fantastic album opener with ‘Mean Green Killing Machine.’ Overkill has made opening tracks an art form. Looking back over your canon of work, which album opener is your best in your mind among your other 17 albums?

That’s a great question because we’ve sat around and laughed about this in dressing rooms. If you just picture it; five sweaty dudes, shirts are off, the beers are open, just sweating all over the couch after a show, and somebody out of the blue says, ‘You know what would be fun? Why don’t we just do all the openers from every record? Make that our live set.’ And the next guy goes, ‘We’ll be exhausted’ [laughs]. ‘Are you crazy? These are the ones that have the most energy.’ My opinion, the best song that we ever did as an opener, and I’m going to go between two; in the old era there was a song called ‘Deny the Cross’ off of Taking Over, and in the middle era, it would be ‘Necroshine,’ the title track off the same album.

You segued quite nicely there, because this year marks the 30-year anniversary of your second album, Taking Over, which features some iconic Overkill tracks. Can you take us back and tell us your memories of making that record?

It was a unique time, because it followed up our debut record, Feel the Fire, which was just chaos. We didn’t really know we were part of this music scene or business during Feel the Fire; we were just living and riding that chaos wave. Now we were in a position where we had to do a second record, and the chaos kind of melted away and reality set in. I think what we were really lucky about was there were three or four songs that were done prior to us going into any kind of writing sessions for this. So we brought some of that chaos with us to the second record. I remember, for me personally, I developed nodes and polyps on my vocal chords during the tour for Feel the Fire, and I had to take singing lessons to learn how to sing correctly. I wore the polyps down, but it cleaned my voice up a little. So when I listen back to that record I always listen to this wall of guitars…we’d started formulating our sound, but when they dropped me in to sing, I was almost unrecognizable to myself because it was a different person from the Feel the Fire record. That’s what I remember from a personal side, but when it was all said and done, I think we did something pretty special back then for a sophomore release.

You can listen to the full interview with Bobby Blitz below. The Grinding Wheel releases February 10 through Nuclear Blast Records.