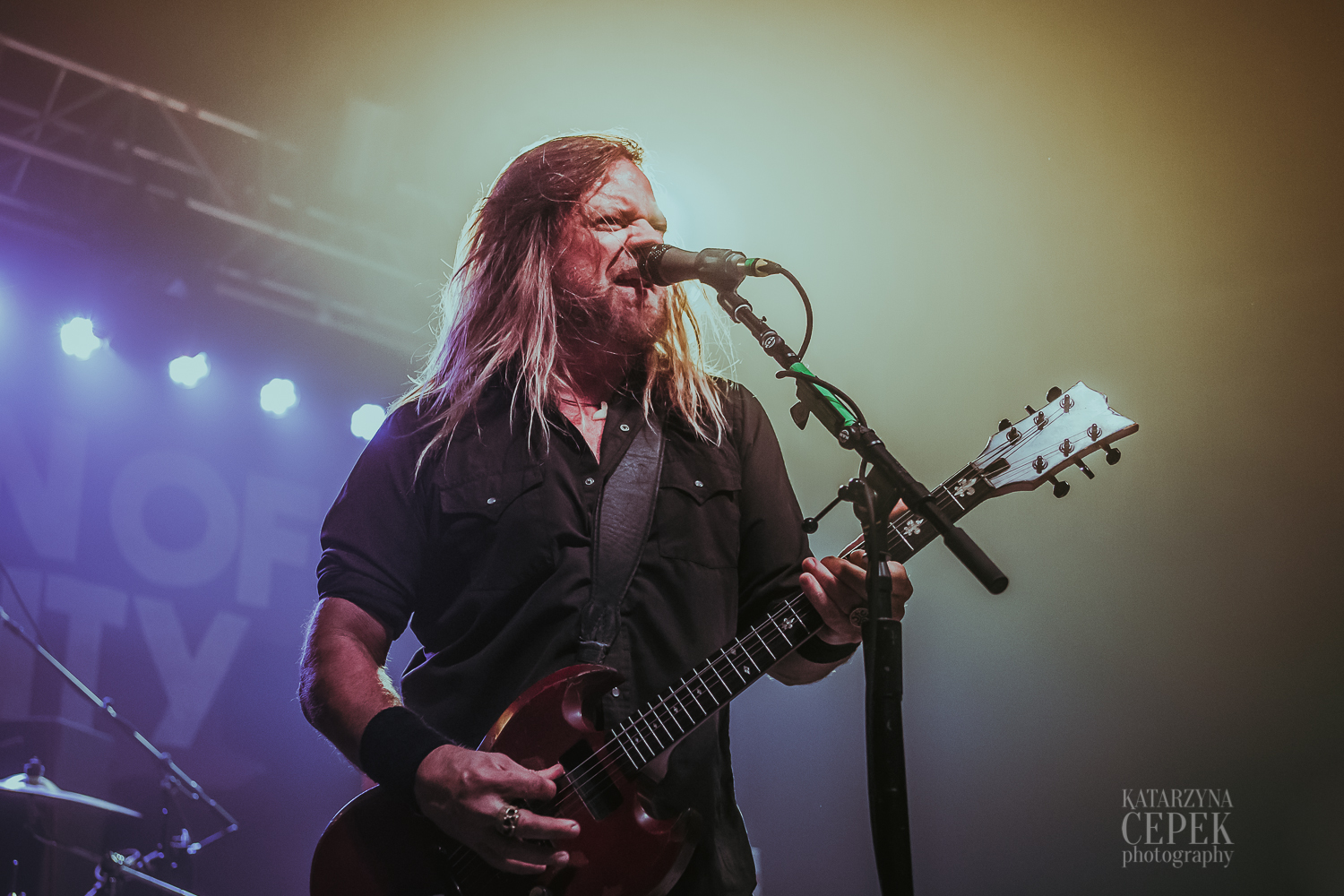 Sometimes creating a vision of a night full of music perfection is difficult to achieve. With Corrosion of Conformity as my overall favorite band, I knew it was going to be a great night. I did not, however,  quite realize the caliber of the rest of the night until it unfolded. All four bands; Lo-Pan, Quaker City Night Hawks, Crowbar, and Corrosion of Conformity, constructed an environment built of epic proportions at the Boise Knitting Factory. They all brought it and the crowd fully bought in. Though at the beginning, I don’t think anyone was fully prepared.

Starting the night off, and starting it off right, was Lo-Pan out of Columbus, Ohio. Band members; Jeff Martin (vocals), J. Bartz (drums), Skot Thompson (bass), and Chris Thompson (guitar) began and the crowd immediately swarmed to the stage. Martin’s vocals were astounding. His voice carried through the entire venue as it seeped into every vein. Their stoner rock overtone was the precise mixture to build a memorable set on stage. I attempted to focus on each musician to gain a full perspective, but found myself continually getting swept up in the music and losing said focus. They set the pace for the night in a big way and, I can only surmise, also ended with many new fans.

Quaker City Night Hawks played second. I had briefly listened to some of their music and was unsure of how they would fit into the ambiance of the evening’s line-up. This was quickly forgotten as I witnessed the smoothest transition between the two bands. Quaker City is a southern rock trio out of Fort Worth, Texas. Sam Anderson (vocals, rhythm guitar), David Matsler (vocals, lead guitar), and Aaron Hayes (drums), were eccentric and entertaining. Their unique fashion style and stage presence made them stand out. They also had a mix of some bluesy elegance. A band that seemed they would stand out in an awkward way actually ended up standing out in a highly captivating and charming way. Definitely a band to see.

Crowbar. I mean really, need I saw more? Long time pioneers out of Nola sludge scene, Kirk Windstein (guitar, vocals), Matt Brunson (guitar), Tommy Buckley (drums), and Todd Strange (bass) dove in full force and rocked everyone’s faces off. Their heavy harmonizing guitars were compelling as Windstein’s vocals tore through your viscera. At one point, Windstein got the entire crowd involved in a heavy breakdown that felt like it was going to tear the roof off. The energy was unreal. You could see old fans and new fans come together almost as if “planets collide” in a family of metal. At this point I was wondering if there was even a possibility of the crowd having the same interaction with Corrosion.

Corrosion of Conformity. Damn. Every time I have seem them I think, “this is the best I have seen of them yet.” Well, here I go again, this was the best I have seen of them, yet. Hailing out of Raleigh, North Carolina; Pepper Keenan (vocals, guitar), Woodroe “Woody” Weatherman (guitar), Mike Dean (bass, vocals), and Reed Mullin (drums, vocals) concluded the evenings thunderous festivities with some of the best crowd interactions I have yet to see from any band. They encouraged the fans to choose two of the songs by giving a “this or that” option, and looked happy to be there the whole damn time. While “Albatross” and “Clean My Wounds” were clearly crowd favorites, no one fell quiet or stood still during all the other unforgettable and incredible songs. I even had a bit of an emotional experience with one of my favorites, “13 Angels”. I can not speak highly enough about the live show Corrosion continues to put on, even after all these years they have been playing.

The night was full of many emotions, high energy, and good natured people just loving all these bands brought to the stage. The environment was invigorating. Every band appeared to bring everything they had and invited the crowd to jive with all their vitality. The pit was active, alive, and well, and everyone appeared to have an incredible night. One fan, Susan Pursely stated, “from the moment they [COC] started the first notes of ‘Mano de Mono,’ I had goosebumps. You could tell all band members were truly enjoying themselves and that energy infected the crowd. I couldn’t help but look around to see the pure joy echoing from the stage onto everyone’s faces. I sang my heart out and enjoyed every minute of the show!” There you have it, it was a nearly perfect night.