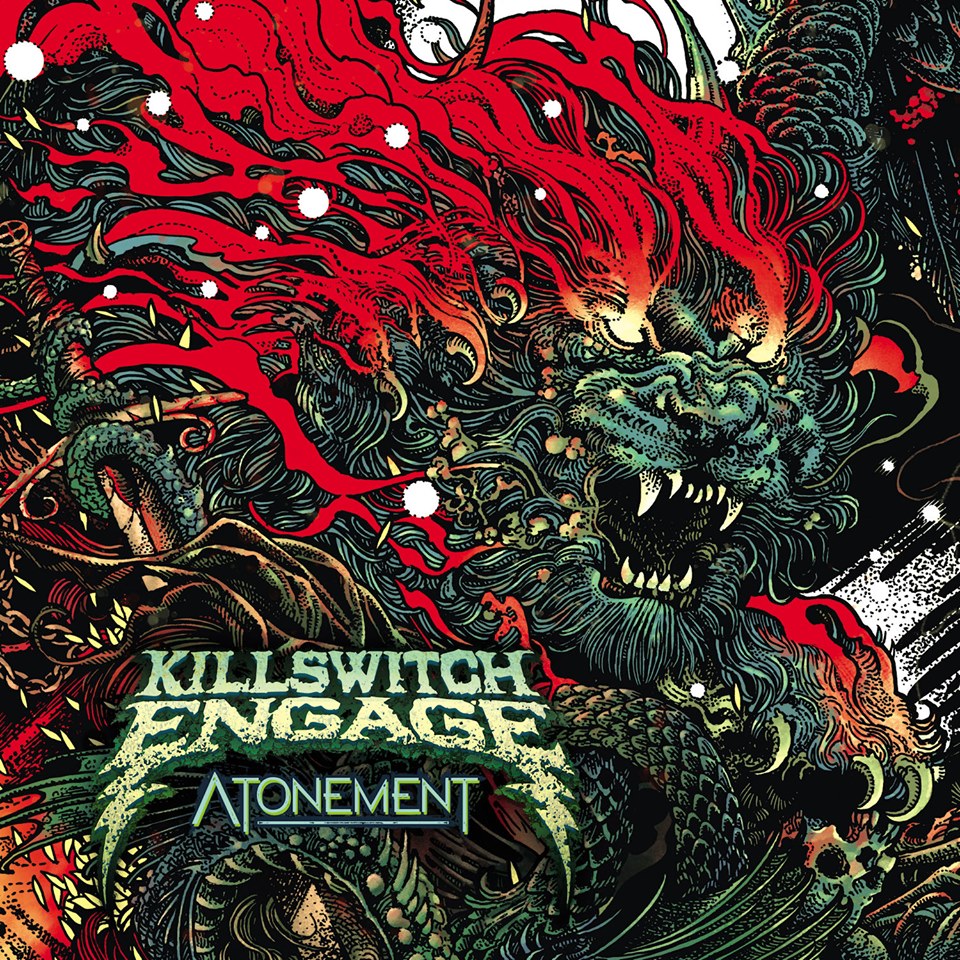 Anytime I write about Killswitch Engage, I have to mentally and emotionally prepare myself. I have yet to find a lyricist that continually touches my heart as much as Jesse Leach and his beautifully written words. There is something special about this band in general. They tackle many elements of musicianship, important topics, comedy, and humility, and even after twenty years, they all still do it with smiles on their faces. Atonement is Killswitch’s eighth album release, and just as phenomenal as its’ predecessors. Heavy, melodic, kickass riffage, Killswitch goodness. I have sat down numerous times to write this review and listened to the album in its entirety numerous more, and am still struggling with the best way to describe what I have been experiencing.

Jesse’s vocals are a force to be reckoned with on Atonement. After his scare with the polyps and scar tissue on his throat, and the surgery that followed, you would think his voice would suffer. Not only are they still rock solid, but I would argue they are the best I have heard from him yet. He has an vast range and hits every bit of it masterfully. The album’s dimensions are extreme in the best way. Entirely heavy to the melodic style we have come to know so well from them. It is a masterpiece.

Killswitch Engage’s incantation hails from these incredible musicians: Jesse Leach (vocals), Adam Dulkiewicz (guitar, production), Joel Stroetzel (guitar), Mike D’Antonio (bass), and Justin Foley (drums). They started in 1999 in Western Massachusetts and have continued to be a force to be reckoned with since, even with vocalist changes along the way. While everyone has their opinion and debate on the two singers, Leach versus Howard Jones, most fans settle into appreciating and enjoying both artists. I have found this rare and refreshing. I will say, one of my favorite factors on Atonement, is the collaboration of both vocalists on the second track, “The Signal Fire”.

The album starts off guns a blazing. “Unleashed” is heavy and confrontational. Adam D and Stroetzel’s chunky guitar riffs fill your ears immediately. D’Antonio and Foley’s pummeling rhythms punch you in the gut with intense force. Many fans have already given the thumbs up to this early released song. You will all soon know, this is one of many impeccable tracks on this album is full of monumental musical perfection. “Let’s GO!”

The aforementioned “The Signal Fire”, has guest vocals from ex-frontman Jones who now crushes it with Light the Torch. The song begins with epic in your face screaming, insanely catchy and fast drum beats, extraordinary guitar riffage, and slowly moves into a memorable chorus. “I won’t give up this fight,”  is everything these guys stand for in one short lyric.

“Us Against the World” I was already sold on this one just by the song title. This track is so damn impressive. They make you believe we are all one. The lyrics encourage you to find that motivation and determination to come together and take on all the world as a united force, but with positivity and love, as Killswitch continues to proclaim. I picture unity through people joining hands while singing and screaming this out. It is a beautiful song. “Nothing can ever tear us apart.”

“The Crownless King,” has another incredible guest vocalist, Chuck Billy from Testament. As you can imagine, if you know Testament, this song is thrashy and heavy. It is intense with guitar sorcery all the way throughout. “I am Broken Too”, has also been previously released and has already made a big impact. While this song slows the album down, the message is urgent. Leach is open about his mental health struggles, which has helped others be open as well. I cannot explain the importance of this track, but I can say it has already made a huge impact on people who also struggle with their mental health. Hashtags #IAmBrokenToo have surfaced everywhere. All I can say, is thank goodness for Jesse and his sincere transparency about a subject that so many are afraid to tread. Jesse, you are making a difference, and potentially saving lives. Thank you.

“As Sure as the Sun Will Rise,” is the first song that continually stuck in my mind. If I absolutely had to pick a favorite on this album, this might be it. I feel it in every fiber of my being. It is heavy, uplifting, and monumental. It is a comfort, but also a push to be and do better. “Nothing stands in our way as sure as the sun will rise again.” Solid gold lyrics. We all go through tough times, what we do with those moments is on us. Jesse encourages us to use these times to get through it all and use the experience to rise above it.

“Know Your Enemy” is heavy, epic, remarkable. This song is about recognizing who the enemy is and fighting back. It clearly has a political overtone designed with resisting the system, as the lyrics state. “Take Control” begins with a slow and soft riff, and smooths into a distinguished chorus. Once again, I love these lyrics. Taking control of your emotions by looking within when you feel everything is out of control. Jesse uses his words to teach the listeners how to learn this technique by using self awareness. It is another incredibly important lyrical song.

“Ravenous” another powerful and heavy song that is flawless. Allow me to switch gears to the other musicians here, because they are far from talentless. The composition of these songs are perfection. Every instrument complements and enhances the rest. Foley’s drumming is progressive as are the Adam D and Stroetzel’s guitar riffs and solos. They all play exactly what the song needs. D’Antonio’s bass steadies the sound and the rhythm. “I Can’t Be the Only One”, this track is beautiful and heartbreaking. I have never felt more connected to someone who I have only met once, through lyrics alone. Leach has a way of making you feel as if you are a part of something so much bigger than what you could ever imagine. I feel the connection so strong, I sometimes think I can see him and all I have to do is nod, because that is all he needs to know that I get it. We get it. This life we are all fighting through and struggling within, he makes you feel that you are not alone. That you have a whole team fighting with you. It is amazing how someone can do that with words and music.

“Bite the Hand That Feeds,” exits the album with incredible force and heaviness. Jesse’s vocals are ridiculous on this song. It is fast paced, has absurd changes, and is the best finale of any album. This might be tied for first in favorites. The riffs, the range in vocals, the changes, the lyrics, bewitching.

Atonement is a guide to life. A lesson of awareness and leads the way to gaining control of life in general. It is a mantra to help us all rise above the struggles and obstacles life brings. These guys are class acts with a big message to share. You can easily see they enjoy what they do, while also discussing important topics. Love seeps out of their pours and hate is a stranger to them. They get angry and they scream about what we all should be screaming about, but it is with a level of passion and respect. Atonement tackles all this with grace and with the power of music. It is a must for your collection. 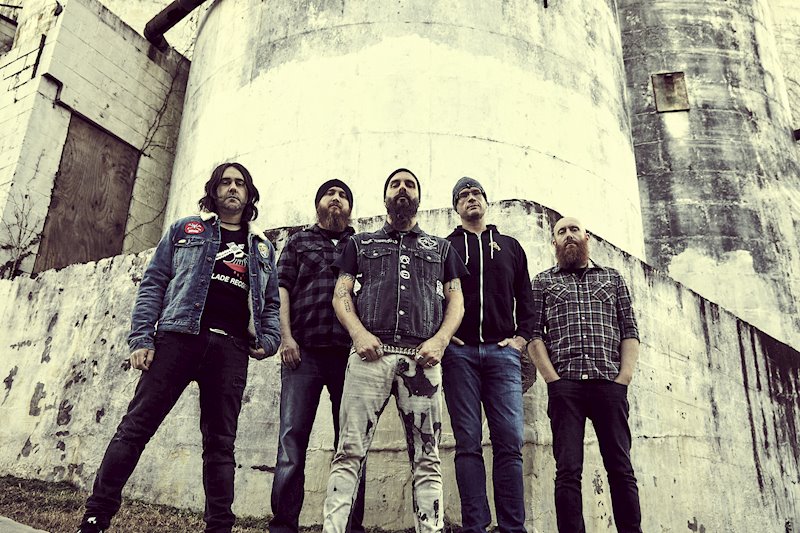