Artist Of The Month – September 2018: CLUTCH 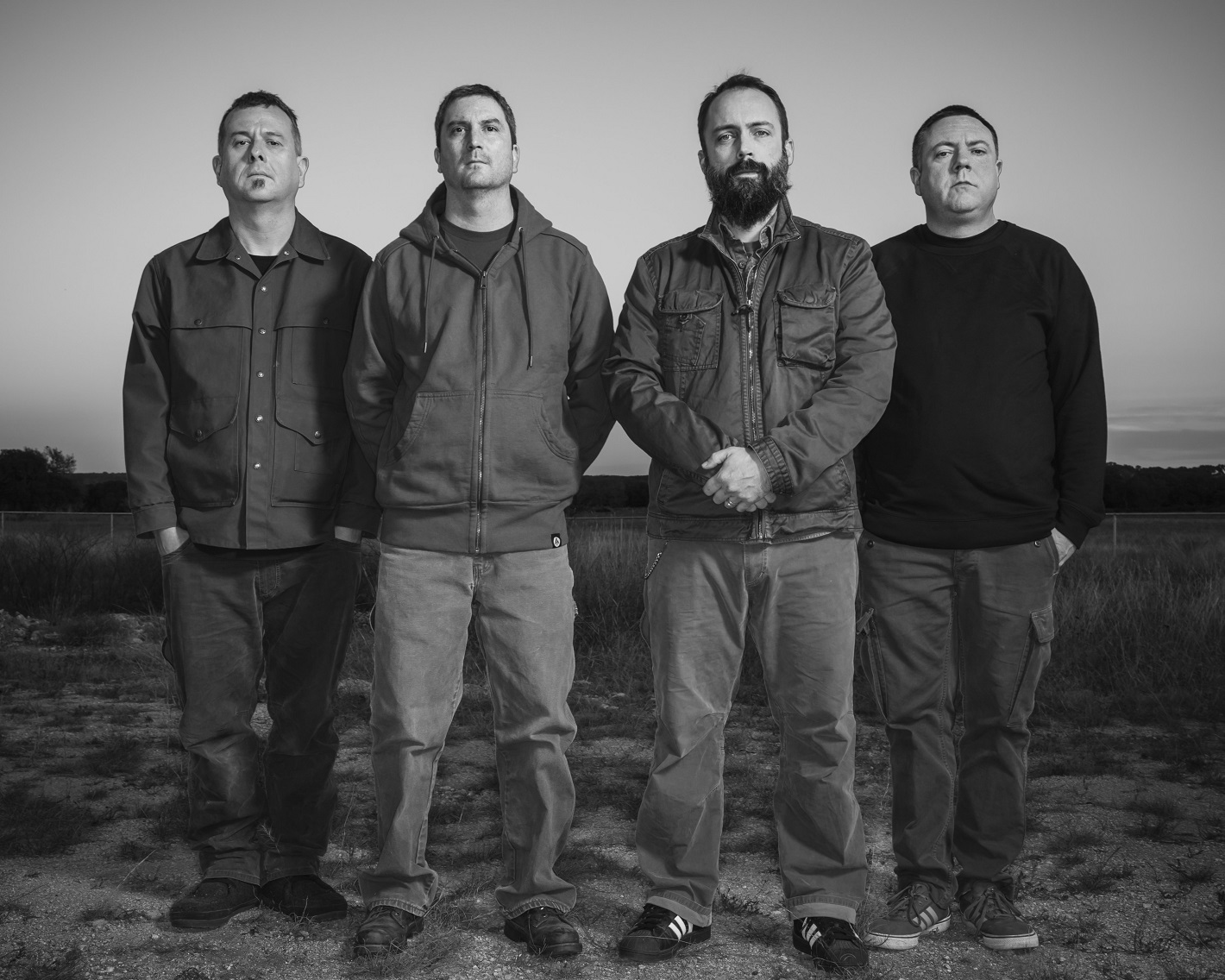 In the long and storied history of rock and roll, or at least the parts of it for which I’ve been alive, there is perhaps no more perplexing time than the mid-to-late 90’s.  With the “grunge” era being slowly pulled apart at the seams by the weight of its own self-loathing, major record labels—completely oblivious to the impending war that digitized music was about to wage on their bottom lines—unleashed a wave of truly awful rock and roll music upon the masses.  Much of it was benign (all those second tier “grunge” bands), but some of it was damn near criminal in its aural offensiveness.  And I’m not saying that as some crusty old man who never got over Led Zeppelin’s break-up, no, I’m saying that as someone who was—at the time—an impressionable teenager with less-than-mature sensibilities when it came to good music.  In other words, I was the demographic.  “Rap rock” became a thing, as did “nu-metal”, and it seemed as if there was no hero there to save us.  Dark, confusing times indeed, but if you were to compile a list of rock and roll bands who emerged from 1993 to, say, 1998, you’d end up with at least some decent music in the lot.  But if you whittled that list down to bands who are still making vital and compelling music in 2018 you’d be left with a very short list—and if you whittled things down even further to include only bands who’ve maintained the same core lineup for that span of time, I think maybe only one band fits the bill: the awesome and mighty Clutch.

Clutch was formed in Frederick, Maryland in 1991 by Tim Sult (guitars, backing vox), Dan Maines (bass, backing vox), Jean-Paul Gaster (drums/percussion), and lead vocalist/guitarist Neil Fallon (who replaced original singer Roger Smalls shortly after the band formed)—all of whom were high school friends.  Clutch’s debut, Transnational Speedway League, was released in August of 1993 (25 years ago!) and—if I’m honest—sounds mostly unremarkable outside of the context provided by the rest of their discography as it sounds like a lot of releases from that era—generally unfocused and lacking in depth and maturity.  Or maybe I’m only saying that because I generally don’t dig punk rock, which seems to have been the album’s primary underpinning but, at any rate, Clutch’s self-titled sophomore album followed in mid 1995, and marked an early turning point for the band both in terms of craft and commercial success.  Leaning more towards stoner and blues rock, Clutch iterated to a slightly more eclectic sound, and it was also the album where Fallon began to truly come into his own as the bellowing, witty, sardonic vocalist we know and love today.

The period from 1998 to 2001 was a very prolific time for Clutch as they released albums number 3, 4, and 5 in rather quick succession—starting with the release of Elephant Riders in April of 1998 on Columbia Records, followed by Jam Room in October of 1999 on the band’s own imprint, River Road Records, and then finally Pure Rock Fury in early 2001 on Atlantic.  By this point in their fledgling career, two things are definitely worth noting.

First, Clutch had revealed themselves to be a band capable of considerable sonic diversity.  From their angsty, aggressive debut, through the release of the loose and funky Jam Room, to the guest-laden and aptly-named Pure Rock Fury, Clutch had already covered a great deal of territory, revealing a knack for integrating enough variation to their sound from album to album to keep fans guessing.  Demonstration of this can be heard in everything from Pure Rock Fury’s rap metal sendup “Careful With That Mic…”, to the addition of trumpet on Elephant Riders and—particularly—organ flourishes on Jam Room.

Second, the release of Jam Room on their own label marked Clutch’s initial foray into the world of self-publishing—an exploration that they’ve since fully capitalized on with the formation Weathermaker Music in 2008.  Asked about the inherent risks and benefits of running one’s own label in an interview with Metalsucks, Fallon had this to say:

It’s really liberating in a lot of ways. It’s also more work. Like most things, with more work there’s more reward. We have to wear different hats at different times, and I think that’s taken us a bit of time to do [well].

Prior to the formation of Weathermaker Music, Clutch had signed with DRT Entertainment (a label they would eventually sue for unpaid royalties) for the releases of 2004’s Blast Tyrant, 2005’s Robot Hive/Exodus, and 2007’s From Beale Street to Oblivion.  Blast Tyrant is probably best remembered for the most boogie-driven protest song (I’m using the term “protest” loosely) in recent history with “The Mob Goes Wild”, the video for which was directed by the late Ryan Dunn of Jackass fame.

Robot Hive/Exodus, for me at least, was a landmark album for Clutch.  For lack of a better description, and at the risk of denigrating their earlier material, it’s the album where Clutch started to show the early flourishes of maturity that define their more recent output. Sure, songs like “Burning Beard” and “10001110101” demonstrate their blustering stoner blues thunder, but Robot Hive/Exodus brings a warm complexity to the table as well, compliments of generous Hammond organ usage and more jam based song composition—and as the album closes with two straight up old-school blues covers, it seemed to foretell a future in which Clutch would ease into their well earned role as stoner rock elder statesmen.

Their final album on DRT would be From Beale Street to Oblivion, and although it starts out with a righteous bang, the album is memorable to me for how well it expands upon the more traditional blues sound Clutch began exploring on Robot/Hive Exodus, particularly on tracks like “The Devil & Me” and “Electric Worry”, the latter of which integrates lyrics from an old Mississippi Fred McDowell song called “Fred’s Worried Blues Life”.

To my ears, late period Clutch follows a somewhat familiar pattern in that the albums seem to be sonically linked in pairs.  In this manner, Clutch’s ninth full-length (and first on the aforementioned Weathermaker Music), Strange Cousins from the West, is the spiritual successor to From Beale Street to Oblivion as it very much continues the warm, earthy, bluesy vibe they’d fostered on its predecessor.

After a somewhat lengthy break (by Clutch’s prolific standards), Clutch changed directions slightly on 2013’s Earth Rocker.  Produced by Machine (who also produced Blast Tyrant), Earth Rocker saw Clutch trim their sound down and stuff it into a more focused and straight up rock and roll package, which was a bit of a double edged sword.  That’s not to suggest that Earth Rocker is a slouch in any sense of the word, but its largely to-the-point delivery had a way of burying part of the patented Clutch charm.  Fortunately, Clutch perfected the formula they seemed to be going for on Earth Rocker with their outstanding 2015 release Psychic Warfare.  Clocking in at just under 40 minutes, it’s significantly shorter than every other release save Jam Room, but it is packed to the gills with the first-rate riffage, pounding groove, and witty lyricism the likes of which few of Clutch’s contemporaries can match.

I’ve yet to fully digest their latest album, Book of Bad Decisions.  Chalk it up to a lack of time and my insistence on properly digesting the album on vinyl rather than digital, but all indications are that Clutch has produced another gem—Metalnation’s own Neeka sure seems to think so anyway.  At this point in their career—and regardless of what me or anyone else thinks of Book of Bad Decisions—it is safe to say that Clutch is nearly peerless.  You’re not likely to find a band more consistently adept at successfully varying their sound while remaining ever true to their roots, nor are you likely to find a savvier bunch of dudes when it comes to navigating the ever-shifting landscape of the music business.  And I’m positive that you won’t find a band who is more capable of continually kicking ass on tour with a wider array of artists (everyone from Marilyn Manson to Slayer, and everyone in between).  And they’ve done it all largely on nobody’s terms but their own.  Clutch is a national treasure, and we at Metalnation celebrate them as such by naming them our September 2018 Band of the Month!