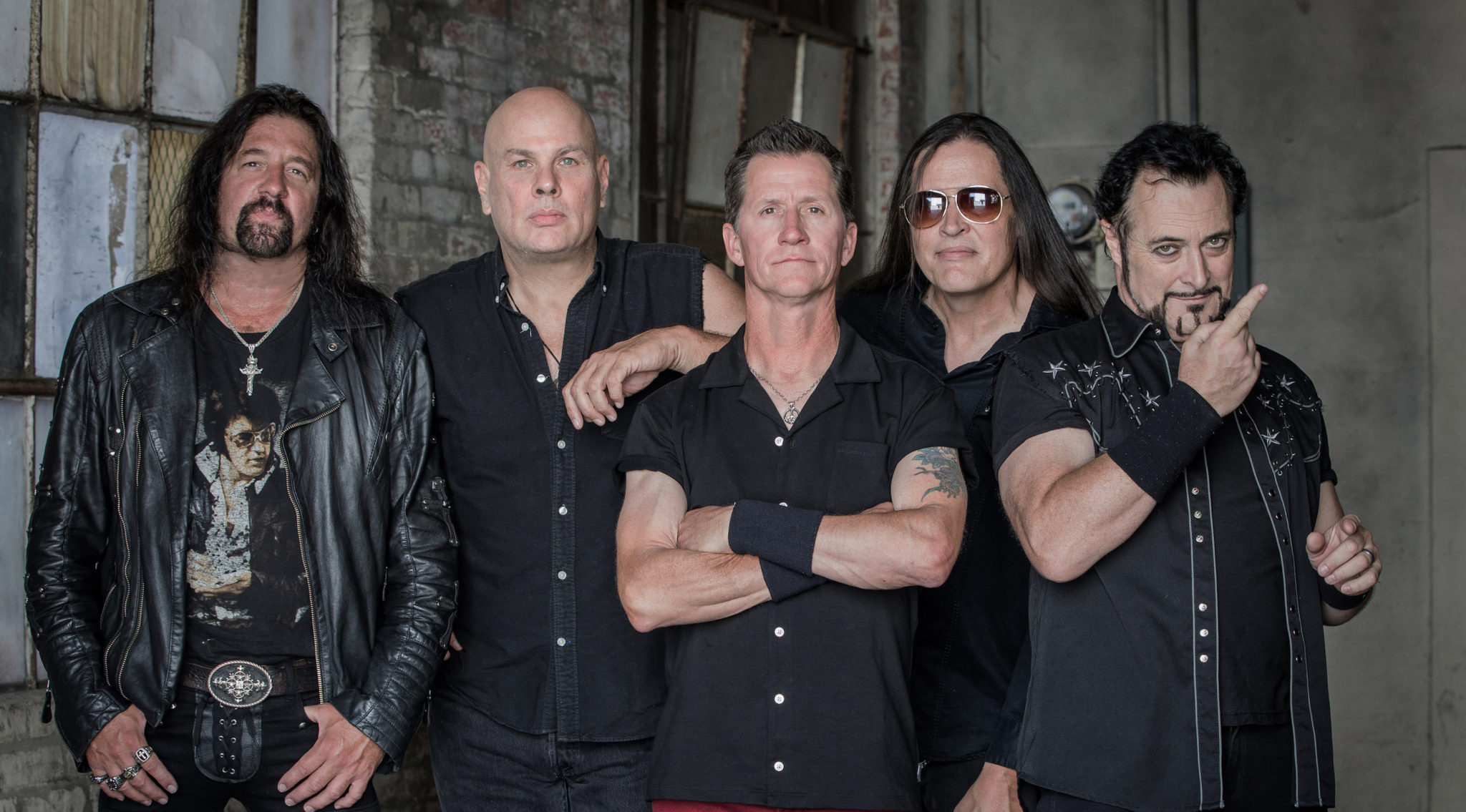 Founder and guitarist Kurdt Vanderhoof took his first crack at creating Metal Church while residing in San Francisco back in 1980. Rumor has it that Lars Ulrich even tried out with the fledgling band before he moved to L.A. and formed Metallica. After the initial incarnation, Vanderhoof moved to Aberdeen, Washington where he formed a new incarnation under the moniker, Shrapnel. The band would eventually reclaim the Metal Church name and self-release its eponymous debut record in 1984. The album cover featured a Gibson Explorer turned into a cross. The guitar appears to be stuck in the ground like a headstone, amidst vegetation growth and a eerie mist of smoke. It is one of the genre’s most metal album covers ever released. The record’s thrashy, straight forward attack earned Metal Church a deal with Elektra Records, and now nearly four decades later, the band continues forward with its crushing new album, Damned If You Do.

Alongside Vanderhoof, the band’s initial line-up also featured vocalist David Wayne, bassist Duke Erickson, guitarist Craig Wells, and drummer Kirk Arrington. The band’s follow-up album, 1986’s The Dark, can be viewed in hindsight as a solid if not somewhat over-produced affair. Likely the result of a shift to a major label. The album featured the band’s first video for the track, “Watch the Children Pray.”

Wayne’s initial stint with the band would be not last, with former Heretic vocalist Mike Howe joining in 1988 in time to record the band’s third album, Blessing in Disguise. Interestingly Vanderhoof had stepped away from the band as a performing member, but remained involved with the songwriting. Guitarist John Marshall took over his fretwork. Blessing in Disguise got a boost from Howe’s presence, and had a punch that felt more reminiscent of their seminal debut record.

In 1991, Metal Church unleashed its fourth studio effort, The Human Factor. The album is arguably the strongest overall record of the band’s early career. Howe’s performances were particularly strong. Unfortunately, the album’s release coincided with the explosion of grunge and seeming imminent death of metal’s popularity. The band hit it hard again with 1993’s appropriately-titled Hanging in the Balance. While the album served as a solid addition to the band’s weighty arsenal, the shift in popular musical tastes combined with management issues led to the band going on hiatus.

The break for Metal Church would be short-lived, as the band was back at it in 1998, releasing a live album before the launch of its sixth studio record, Masterpeace, the following year. The album saw Kurdt return to full-time duties, however, it is largely considered, even by Vanderhoof, to be the band’s weakest effort. He refers to the record as “Disasterpeace.” Masterpeace marked the ill-advised return of Wayne on vocals, who would pass away in 2005 from gangrene complications as a result of a car accident. Likewise, an ailing Arrington would only play in limited fashion on the record, though he would return one final time on the band’s comeback affair, 2004’s The Weight of the World. This album featured new vocalist Ronny Munroe, along with bassist Steve Unger and guitarist Jay Reynolds, (who replaced the departed Erickson and Marshall, respectively). While the record suffered a few production flaws and a couple of noticeably “lesser” tracks, the album stands as a declarative reminder of the band’s knack for crafting hammering metal anthems.

Metal Church returned to its thrashier roots for 2006’s A Light in the Dark, an album that occasioned the debut for new drummer Jeff Plate.  This return to the band’s 80s roots continued on 2008’s This Present Wasteland. The album marked the debut recording for Kurdt’s current six-string counterpart, Rick van Zandt. The band would take another brief hiatus before reforming a second time in 2012. Munroe would stick around for one more record, 2013’s Generation Nothing. The album featured some of the band’s best work in years. From the speedy and punkish opener, “Bulletproof” to the chug and rumble of “The Media Horse,” the record hit like a breakneck juggernaut.

The band’s eleventh studio album, 2016’s aptly-titled XI, signaled the return of what many fans consider to be the band’s signature voice, Mike Howe. After two decades out of the music scene, Howe sounded as powerful and edgy as he did in the band’s heyday. The album took the promise of its predecessor, XI, and amped it up even farther. Vanderhoof brought in Chris Collier to help produce, and it proved to be a brilliant move.

On December 7, Metal Church will unleash its 12th studio album, Damned If You Do through Rat Pak Records. The record finds Metal Church inventing new ways to reinvigorate the power of their victorious 1984 debut album, dealing out track after track of pure metal glory. If it’s possible, the band may have released the best overall album of its career with Damned If You Do. The opening title track is a hooky and muscular buzzsaw of tight riffs, infectious yet heavy passages, with Howe’s biting vocal assault leading the way. “By the Numbers” is an instantly addictive classic, while tracks such as “The Black Things,” “Revolution Under Way,” offer slower, more nuanced moments of darkly emotive groove and melody.  This balance goes back and forth throughout Damned If You Do, culminating in the full on mosh masterpiece, “The War Electric.” New drummer Stet Howland (ex-WASP) helps drive the record with percussive precision.

A dozen albums into its often unheralded career, Metal Church is not only resilient, but notably relevant. Over the course of their last three records, the band has forcefully (and thankfully) re-emerged and might actually be the strongest it has ever been creatively. While Metal Church may forever sit near the top of metal’s most underrated and underappreciated talents, Metal Nation and Metal Nation Radio is proud to select the band as our December Artist of the Month.