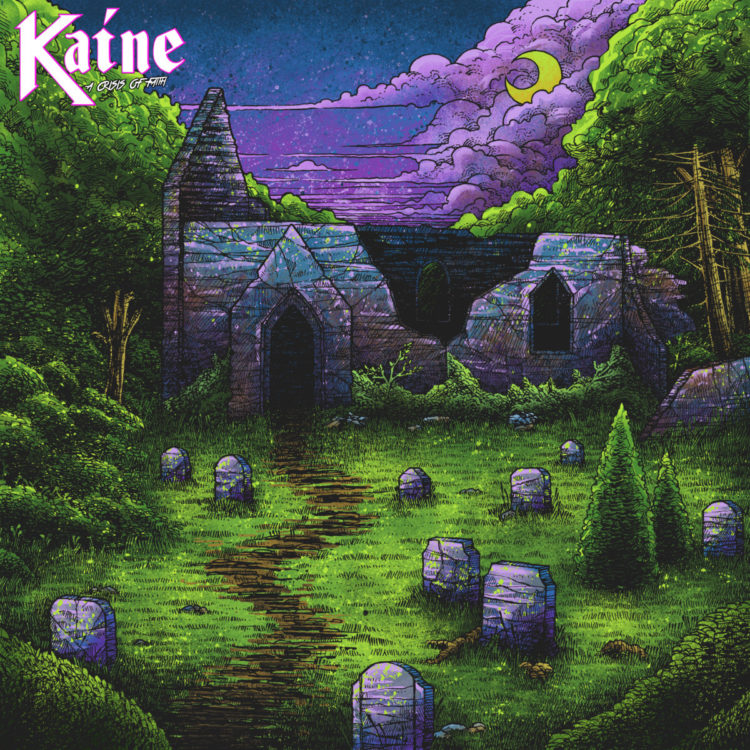 Kaine – A Crisis of Faith

Traditional metal band Kaine is from Britain, the birthplace of metal in the 1970’s as well as the subsequent New Wave of British Heavy Metal (NWOBHM) in the early ’80’s. I point that out because I think that it’s much more difficult to have the NWOBHM as a major influence in your sound with that geographical pedigree. Lots of American bands have that same influence but when the band is British I believe we set the bar a little higher. The overarching question is, among the hundreds (thousands?) of bands who’ve claimed the NWOBHM as influence, does Kaine deliver the goods?

To give you some context your humble servant was alive, a metal fan and well on the way in adulthood when the NWOBHM movement began. I have fond memories of my best friend and I driving to Toronto to go to the Record Peddler and dig voraciously through the import bins, often buying albums based on album art and band name alone unless we had read something in the latest Kerrang! magazine. One of those albums purchased by name and cover alone was Diamond Head’s Borrowed Time released in 1981. The reason I mention it is Diamond Head is the first band that comes to mind when pondering who it is that may inspire Kaine to sound like they do. Then mix in a dose of early Judas Priest plus some DiAnno era Iron Maiden and you have the beginning of an apt description before you actually hear the album. From there it’s up to you, but know this: A Crisis of Faith is a fantastic album that is AKNF… all killer no filler.

This wondrous journey begins with the pastoral acoustic introduction of “Heaven’s Abandonment” that builds into a Maiden-esque gallop decrying the pain of sin and doubt in life. Founder/Guitarist/Vocalist Rage Sadler delivers with urgency and authenticity, seaming to lay the band’s heart and soul bare. The album continues to deliver meaty, satisfying traditional metal throughout with nary a weak moment among the ten tracks that clock in at an impressive sixty plus minutes of eargasming goodness.

While I tend to stay away from track by track reviews A Crisis of Faith is one of the few albums I’ve heard in the last few years that would warrant such attention. We, however, will take the shorter route and give my highlights of the album which isn’t to say that yours will be the same. With a release of this quality the whole album is a highlight so we’re bound to differ. Aside from the excellent opening track and acknowledging the foregoing there are some additional highlights for this gem including “A Night Meets Death” which begins with a smooth-jazz styled interplay between bass and guitar before delivering the riffage, “Crisis of Faith” the title track,  “Behind the Preacher’s Eyes” (I dig songs about preachers ok?) and perhaps my favourite track “The Mind is Willing” which continues the old school feel within a more modern vibe making for an interesting contrast.

At this point we might be reminded that we asked a question in the opening paragraph. Does Kaine deliver the goods? Hell, they not only deliver them but wait for the package thief to show up at your door, kick the shit out of him and wait for you to arrive to ensure all is well. In other words Kaine’s A Crisis of Faith goes above and beyond to deliver the rare album that is all killer no filler. If you dig traditional metal with great melody, engaging riffs and terrific songwriting look no further. It’s only February and I may have found my album of the year already!

Get your copy of A Crisis of Faith here:  BANDCAMP

Reverend Rock is host of Too Metal For Church on Mondays and Friday’s 11 a.m. to 3 p.m. Eastern time