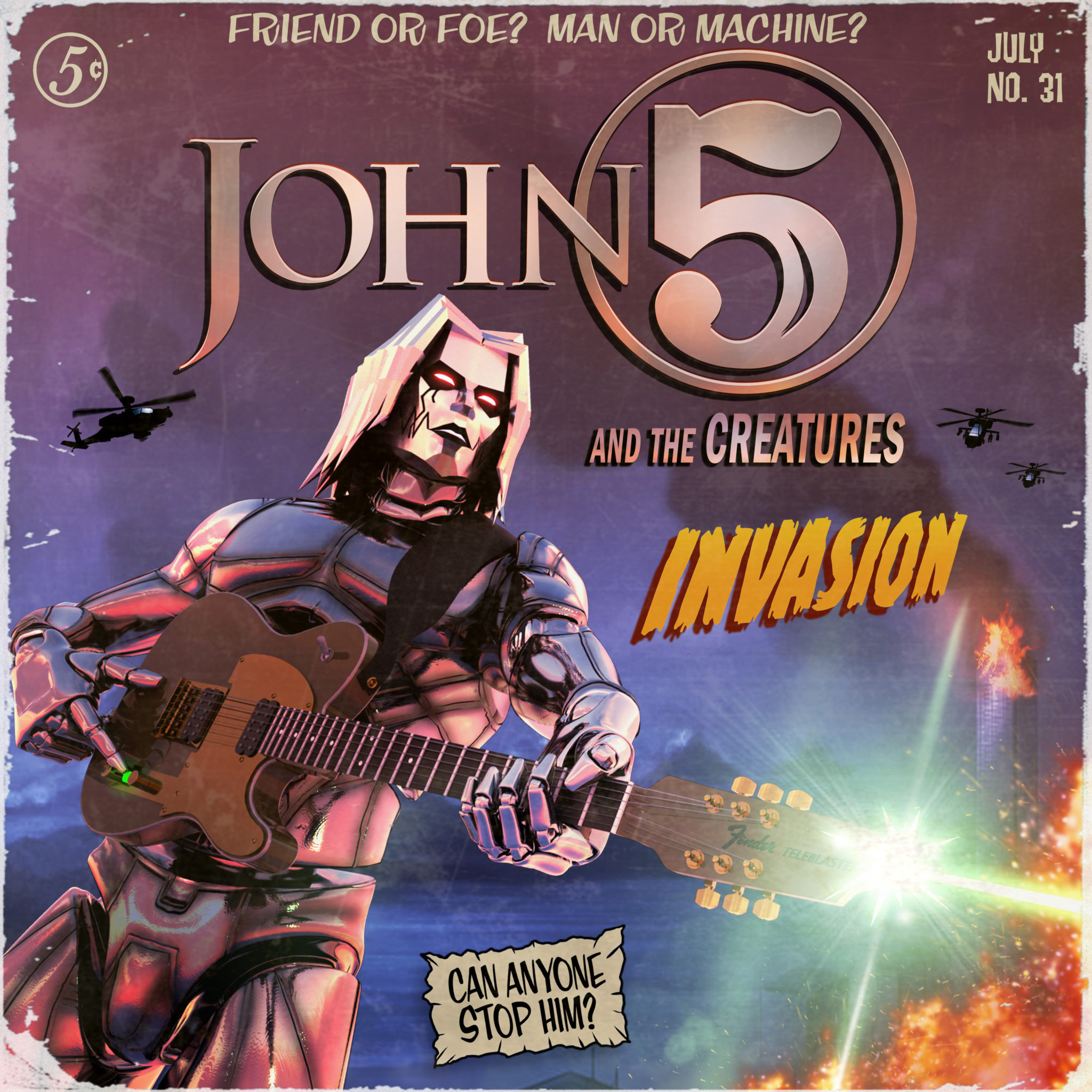 John 5 and the Creatures – Invasion

Most people who listen to music that encompasses incredible guitar playing have a favorite man or woman behind the instrument. I grew up listening to the virtuoso’s Eric Clapton, Mark Knopfler, Tony Iommi, Ritchie Blackmore, and an overwhelming amount of many insanely talented players, but John 5 has settled into a part of my soul and comfortably stayed for over a decade. He quickly became my favorite with my first listen to Songs for Sanity, his second album released in 2005. I did not hesitate to go back and pick up his first album Vertigo,  and have not missed a release date since then. When John 5 added “the Creatures;” Ian Ross on bass and Logan Miles Nix on drums, I knew it was going to be epic. I could expect he would only accept the best, and I was right. These two first-rate imaginative musicians have taken what John 5 does and helped create a fuller sound to compliment his string magic. Their first album as a trio, 2017’s Season of the Witch, was an impressive ensemble and continued to stay true to his sound while implementing some extra richness. There has not been one album thus far I have had any disappointment in, and Invasion continues this streak.

As many know, John 5 has an extensive history in music. He played with Marilyn Manson for many years where he earned his nickname John 5, previously John Lowery. After leaving Manson, he jumped on with Rob Zombie in 2005 and has settled his place with this band since. He has also worked with Paul Stanley (KISS), Rod Stewart, and Lynyrd Skynyrd along with many others. He started releasing solo albums in 2004 and had released eight albums before he added Ross and Nix to the creative mix. Invasion which drops on John’s birthday, is the follow up to the trio’s stunning live effort,  2018’s It’s Alive.

The album begins with the aptly-named title-track, “Invasion.” Your ears are immediately invaded with Nix’s drum beat while eerie background noises seep in. Ross edges in his bass notes and slowly John’s guitar pieces take over. The signature guitar tones and the steady beat of the drum digs into your now infected soul as the bass flows through your veins and you prepare for the exotic adventure you are about to embark upon. This quick two minute opening track is a tiny taste of what you are about to experience.

“I am John 5,” opens with an electronic sound that is not completely different from what they have done in the past, but it seems to be more prominent in this one.  A robotic “I am John 5” is continually spoken as John sweeps throughout the song with his legendary sound and skills. There is a funky bass riff that gives this a flavor of uniqueness. This track has been previously released, so give it a listen.

“Midnight Mass” has also been previously released, so your ears get to grasp this wizardry right now. This track reminds me of early John 5 melodies, so I really savored it. “Zoinks” is the last on this album that has been released already, and is one of my favorites on Invasion. A voice cameo from Nikki Sixx really brought it home for me. The music video of “Zoinks” and “I am John 5” were animated, written, and directed by Brett Boggs, who happens to be a Disney animator. Fred Coury (Cinderella) did the score and Barry Pointer did the recording and mixing of these tracks. Eddie Munster actor Butch Patrick is the voice in “I am John “. This album is stacked with ridiculously inspiring and extraordinary people. Matt Zane is the magic behind the shooting of the imagery and live action Scooby Doo inspired video from “Zoinks”. This is such a fun to watch video.

“Howdy” is just as you would expect from the song name. It has a country twang and some old fashioned John 5 chicken pickin’. You will be tapping your toe the entire time thinking, “maybe I can dig this whole country sound.” He does that, he makes you question something you normally would have considered an insane thought. “Crank It- Living With Ghosts” is not a song for the young kids if you are careful with little ears. It is extremely catchy and amazing, but you hear “crank it motherfucker” quite a few times. Just a heads up. John’s soloing in this song is superhuman, but let’s be honest, all his solos are. His sweeps in this one might be my favorites on the album.

“Cactus Flower” has some behind-the-nut action. It is one of my favorite sounds John 5 directs into his music. The common “they are all gonna laugh at you” line out of Stephen King’s Carrie is the start of this track, which makes the rest of the song ultra creepy, but also so mellow and satisfying you don’t seem to care. It is Rob Zombie’s “Devil’s Rejects” in a song. My second favorite song on this album, but it is close to first. “I Want it All” reminds me of a video game musical score. The electronic vocals return as the song sings out title mantra–“I want it all.”. There is a crazy catchy riff and drum beat, and, of course, ludicrous guitar solos. By the end of it, I felt like I had just finished a grueling level of epic proportions in a highly intense game.

“I Like The Funk”, again, is just as you think it would sound. Although, the beginning reminded me of a 90’s type of vibe, it quickly makes the change into a funky transition. One of my favorite aspects of this song is the diversity with all the instruments. They take turns in the spotlight, but so flawlessly you hardly notice. Every instrument compliments the other, yet has its own voice. I didn’t think I would like this song as much as I have, but it is a well composed track. “Constant Sorrow” is where this album ends, which is exactly how I felt with knowing it was the last song. Sorrowful this track is not though. It is steady, catchy, and memorable. A perfect ending to a beautiful album with a country undertone and hard to ignore  beat that will have you clapping along.

Invasion is quite a bit different than J5’s other offerings, yet you can still easily hear it is John 5. He has a distinctive sound, which is incredible since he plays many different genres of music within each album. The Creatures have continued to impress with the fluid distribution of their instruments, which invade and captures the essence of the music overall. What some would possibly believe about solo guitar work and the probability of it all “sounding the same” from the same musician, would be absolutely incorrect when it comes to John 5 and the Creatures. They are remarkably diverse which keeps you interested album after album. The Invasion is coming, prepare to be overcome.