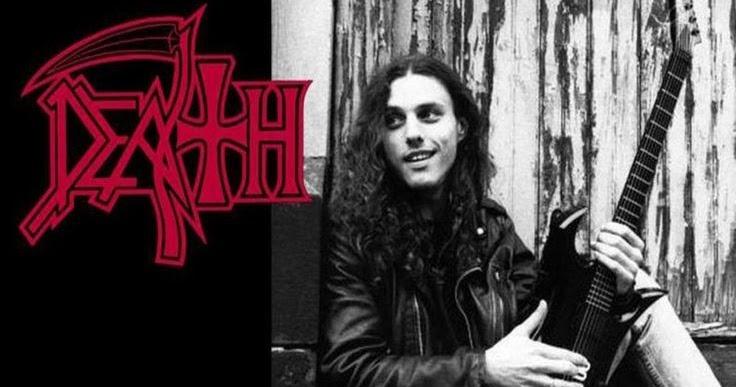 Death is widely known as the forefathers of the extreme metal genre entitled Death Metal.   Death was not only one of the very first death metal bands but they continued to redefine and push the limits of what death metal was and could be. Each release, chronologically, is like watching a child learn to walk, then run, then Olympic marathon.

At the center of it all was a young funny mouthed kid from Florida named Chuck Schuldiner. This man took on a vision and he never wavered for anyone. He had a purpose and though he left this world much to young he left us with quite the catalog of excellence to revel at. So now I’m gonna tell you what order I think the albums are in terms of how good they are. Let me stress this before hand, there is no bad Death album. It’s all a matter of preference and sometimes mood, but here we go…… 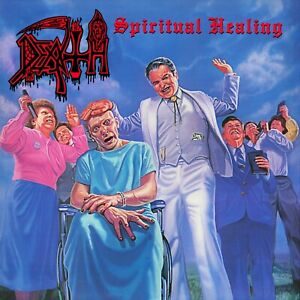 7. Spiritual Healing– Released February 16th, 1990 on Combat Records and is the 3rd studio album from Death. It was never one I got into. In my opinion it was a very transitional album. Chuck left the trademark horror themed lyrics and ushered in the more enlightened lyrical approach the he would be known for. Musically you can hear the riff structure began evolve leaving behind the simple thrash oriented riffs and adding more melodic lines. Though James Murphy lent his very articulated solos to it IMO Spiritual Healing  falls rather short. 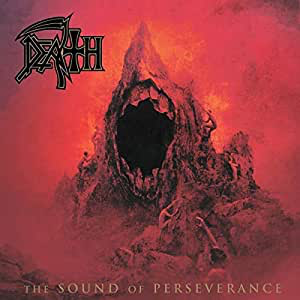 6. The Sound of Perseverance-Released August 31st, 1998 on Nuclear Blast and is the 7th and final Death album. This album, first and foremost, was supposed to be a Control Denied album. Chuck had left Combat and opted for Nuclear Blast, but said they wanted one more Death album. So several songs were redone and this death metal heavyweight was created. The riff structure is very prog like on this album and reflects where Chuck was wanting to take his music, which was away from death metal. It has slight reminders of its predecessor Symbolic but the The Sound of Perseverance  really did not have the ferocity we had come to expect from Death. Songs like “Voice of The Soul” and “Spirit Crusher” are evident that Chuck hadn’t lost his ability to write great songs but he was absolutely slowing down.  At the end of the day Death fans should be happy we got one more from EVIL CHUCK before he left this plane. Though low on the ranking list that is in no way an indication that the album should be overlooked. It still a monster record. 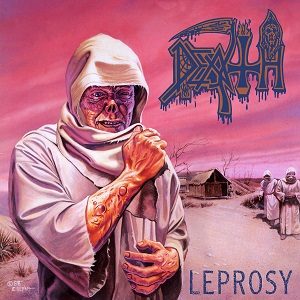 5. Leprosy-Released August 12th, 1988 on Combat Records and is the 2nd studio album by Death. The first Death record to be recorded at Morrisound Studios in Tampa FL by the godfather of extreme metal engineering, Scott Burns. In fact it was Burn’s first release into the death metal world. Being it was the follow up to Scream Bloody Gore it’s still very raw and basically just pure power and ferocity. However, the hooks and lines that would become the staple of Chuck Schuldiner’s musical writing were starting to take form and are ever prevalent. Still very horror themed lyrically but the actual content of the lyrics were much more of real life and not fantasy. “Pull the Plug” is a perfect example of how he took real life situations and portrayed the ugliness in them. All songs on this album are about death, which is still to this day a very clever idea. This would also be the last album that guitarist Rick Rozz would appear on. Overall Leprosy is a classic death metal album and is to some the best out there. 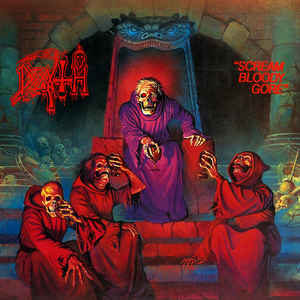 4.Scream Bloody Gore-Released May 25th, 1987 and is the debut album by the band Death. Who started death metal? Was it Possessed with Seven Churches or Death with Scream Bloody Gore? I really don’t care who did it first but Death did it best. From the very start every Death record has a clean and clear production behind it. The music is mad but it’s all blended properly and you can hear all the parts as they were made to be heard. You cannot deny the influence of this album. It sparked an entirely new genre and gave thrash kids something more intense and in your face. Death brought that like an atom bomb with Scream Bloody Gore. Put on “Evil Dead” or “Infernal Death” and pay attention to the tight guitar harmonies. Listen how the guitars pick up into a frenzy and this screeching banshee of death belting out killer lines about zombies and other horror themed things. All guitar, bass and vocals were done by Chuck and drums we done by Chris Reifert. Reifert’s tenure in the band was over after this album  due to Chuck leaving California and moving back home to Florida. Chris would go on to create Autopsy and do other really cool extreme metal projects. Scream Bloody Gore is a testament to the songwriting capabilities of Chuck Schuldiner and the vision he would soon lay out upon the world of extreme music. 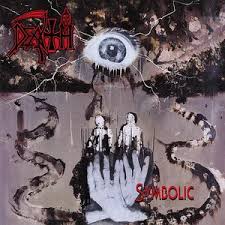 3. Symbolic-Released March 21st, 1995 and it is the 6th studio album released by Death. Symbolic  was a continuance of the more melodic approach while still incorporating fast, razor sharp riffs and catchy lyrical hooks. This album is also perhaps the last true Death album being that Chuck wanted to end Death after Symbolic and the fact that it sounded much more like its predecessors and really nothing like The Sound of Perseverance . Chuck had knack for writing songs about things that pissed him off. Songs like “Empty Words” or “Crystal Mountain” not only boast killer musicianship but the lyrical attack was incredibly on point. Chuck had a style that he was super good at and he used it to his advantage. He always surrounded himself with stellar musicians and this album was no different. Bobby Koble brought a much different approach to the solos than previous lead guys Schuldiner had sought out. Koble’s well phrased more bluesy style solos really added to the well molded riffage Schuldiner was known for. Personal Favorite on this one is ‘Perennial Quest’. I’ve always felt that the acoustic outro was Chucks way of saying goodbye to Death because as I stated before according to him at the time that was going to be the last album bearing that name. 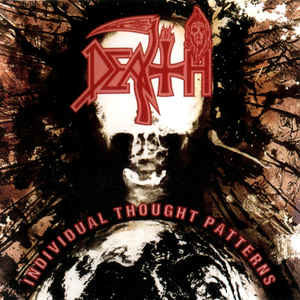 2. Individual thought Patterns-Released June 22nd, 1993 and is the 5th studio album released by Death. Individual Thought Patterns was an anomaly of all the proper forces in the universe aligning to ensure that the ultimate death metal album was to be made. Chuck had parted way with Sean Reinert and Paul Masvidal and for the first time since Scream Bloody Gore  was to write and record all of the rhythm guitar parts. The lead guy he had chosen for this album would be strictly solos and boy did he deliver. Right now, put this album on and go to the track entitled Trapped in a Corner, wait to hear that first solo and just bask in the brilliance that is Andy Laroque. Chills dude. Laroque is well known as King Diamond guitarist but to someone like me he is the 5th Element that lit this album completely on fire. This album was a perfect apex of the ferocious energy that Chuck inserted into everyone of his songs but coupled with very well written melodic hooks and well placed, well articulated lyrics pushed it that much further. Not to mention you had Gene Hoglan and Steve DiGorgio holding down the rhythm section so really, how could you go wrong? The answer is you can’t. 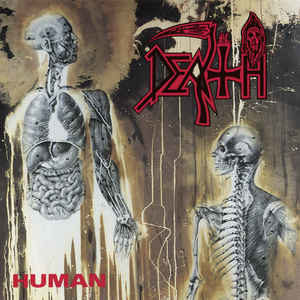 1. Human-Released October 22nd, 1991 and is the 4th studio release by Death. Here it is, my number 1. So many things I could talk about on this album that make it the superior Death album but all I need to say is Sean Reinert and Paul Masvidal. These “jazzy cats’ came in on a growing, budding Chuck Schuldiner and helped steer him in a direction that would forever change the face of death metal. Right from the start the album puts you in a place of well articulated madness. The swift change of riffs sometimes accompanied but single held notes clashing perfectly in a 5th or 3rd harmony and then back into something fast and ferocious. Songs like “Flattening of Emotions” or “Secret Face” were said to be jabs at his former band mates who had gone to Europe and toured with HIS band without HIM. While songs like “10,000 Eyes’ was about where he saw society heading.  Chuck did this a lot actually but hey when you’re a true artist you create a place to exist in without your demons and baggage so I say fuck it, write about it if it moves you. I really can’t stress enough that the personal for this album couldn’t have been better for the time it was created. Not only did you have the Cynic guys holing down guitar and drums but thumping the bass for the the first time was Steve Digorgio. It was metal alchemy dude. Every Death album sans Scream Bloody Gore was recorded at Morrisound Studios by either Scott Burns or Jim Morris so again you can contribute some of the success Chuck had to his engineers really knowing what the fuck to do with his sonic attack style of music. This album influenced so many bands and different types of bands its unreal. Human will forever be the quintessential death metal album because death metal gained real ground that day. It was no longer just noise and loud screaming and banging on stuff. It had evolved into a well articulated expression of how pissed off people were and how far the world had gone to shit.