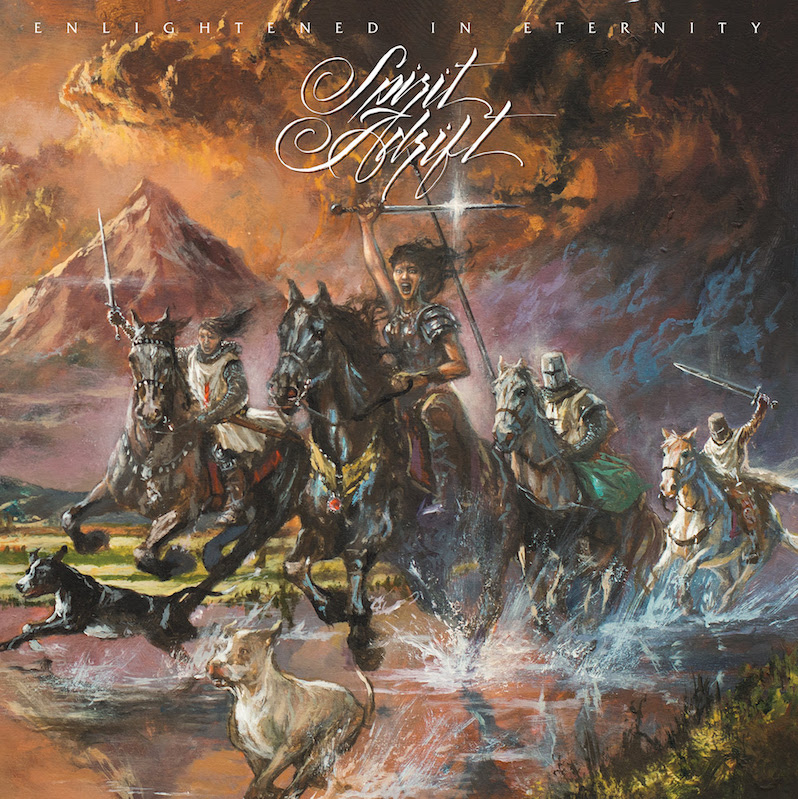 Four albums and two EPs in five years is pretty prolific for just about anyone, but managing to do so while also writing, touring, and recording with another band is insane. Spirit Adrift’s creative genius is the work of Nate Garrett who has been a one-man wrecking crew since creating this project in 2016, handling vocals, guitar, and bass, as well as drums on the first two records. At the same time, Garrett served as guitarist for Gatecreeper. For his latest Spirit Adrift album, Garrett has stepped down from creeping to focus his full attention here. He also brought back drummer Marcus Bryant, who performed on 2019’s Divided by Darkness.

Over the course, of Spirit Adrift’s first three records, Garrett has shifted his songwriting from primarily doomy tropes to the addition of more traditional metal elements. This holds true on Enlightened in Eternity. There are still plenty of doomish and caliginous moments to be found here, but there is also a sense of hope and even light-heartedness to be found in Garrett’s journey toward self-discovery. While he has often delved into existentialism, this record is arguably his most introspective, and dare I say hopeful. That does not mean it’s not balls heavy and crushing.

After a wall of trilling guitar to open “Ride Into the Light”, the spine-grinding begins with pummeling tenacity. Big whumping bass lines and beefy riffs fill your speakers and reverberate through your bones. Bryant’s drum work drops a solid anchor but gets free reign to stand out as more than a rhythmic backdrop. When the tempo picks up there is also something of an Iron Maiden sensibility to the track. The aforementioned allusion to hopefulness resonates through the lyrics here; “If we make it through the night, we will ride into the light.” It’s a fantastic track to kick this record off.

Garrett’s Black Sabbath influence comes through on the beastly “Astral Levitation”. The bass line leading into the breakdown and guitar solo is pure Dio-era Sabb. While there is a definitive weightiness to the track, there is equally a sense of optimism not just lyrically but one that carries over to the feel of the song sonically. More harmonized fretwork on the back-end before the lumbering Iommi groove returns serving up a mammoth riff sandwich.

Garrett’s thumping bassline and whimsical riff to open “Cosmic Conquest” give it something of a playful vibe which recalls The Sword with special guest, Kirk Windstein. Very melodic fretwork and nice vocal harmonies. The whole song has that arena feel to it. Speaking of Windstein, I can’t help but get that full Crowbar groove on “Screaming from Beyond” as well as some classic Ace Frehley influence on some of the lead work.

“Harmony of the Spheres” is a full throttle banger, relentless in its drive and energy with a spirit of retro Judas Priest in the riffage but more Mastodon in the groove. Garrett’s vocals are biting and venomous. Conversely, “Battle High” has an almost sweaty swagger to it. Chugging rhythms roll beneath Garrett’s gritty vocal delivery and Bryant’s almost jazz like, even sultry stick and cymbal work.

Brayant and Garrett impart some of their best performances into the rough and tumble rocker, “Stronger Than Your Pain” which leads the album into its final track, “Reunited in the Void”. This is where the duo return to Spirit Adrift’s trademark lumbering doominess. For longtime fans, this is the song that will bring you back home. At 11-minutes length, Garrett packs this track with everything Spirit Adrift has been known for; atmospheric vocals, ominous grandeur, and ruminating grooves..,.oh, and of course the fu@king riffs!!! There is a dark spirituality at play here as this mammoth beast hulks and heaves into the build to the song’s final two minutes 70s infused, bluesy shred bliss.

I might personally consider this Spirit Adrift‘s best record, though I’m admittedly more of a traditional metal guy and less of a doom connoisseur, so this shift in the drift works for me.  Also, note to Metallica, I think I found Newstead’s missing bass from …And Justice for All. One of my favorite aspects on Enlightened in Eternity is the prominence of metal’s oft maligned low end, and Garrett serves it up in droves. While some decry a certain lack of variance on this record, I disagree. They may have streamlined things, but there is plenty of dynamism and diversity here. This record is simply different than previous efforts.

I’m not sure if Garrett will maintain his newfound lyrical optimism going forward, but the sense of fun found on Enlightened in Eternity is just what 2020 needed. Garrett and Bryant serve each song well, and give Spirit Adrift fans a different sonic perspective for the band’s sound, while still remaining true to its origins. It is also worth noting that Garrett’s guitar work is truly elevated on this record. This is easily a Top 10 Album of the Year contender.