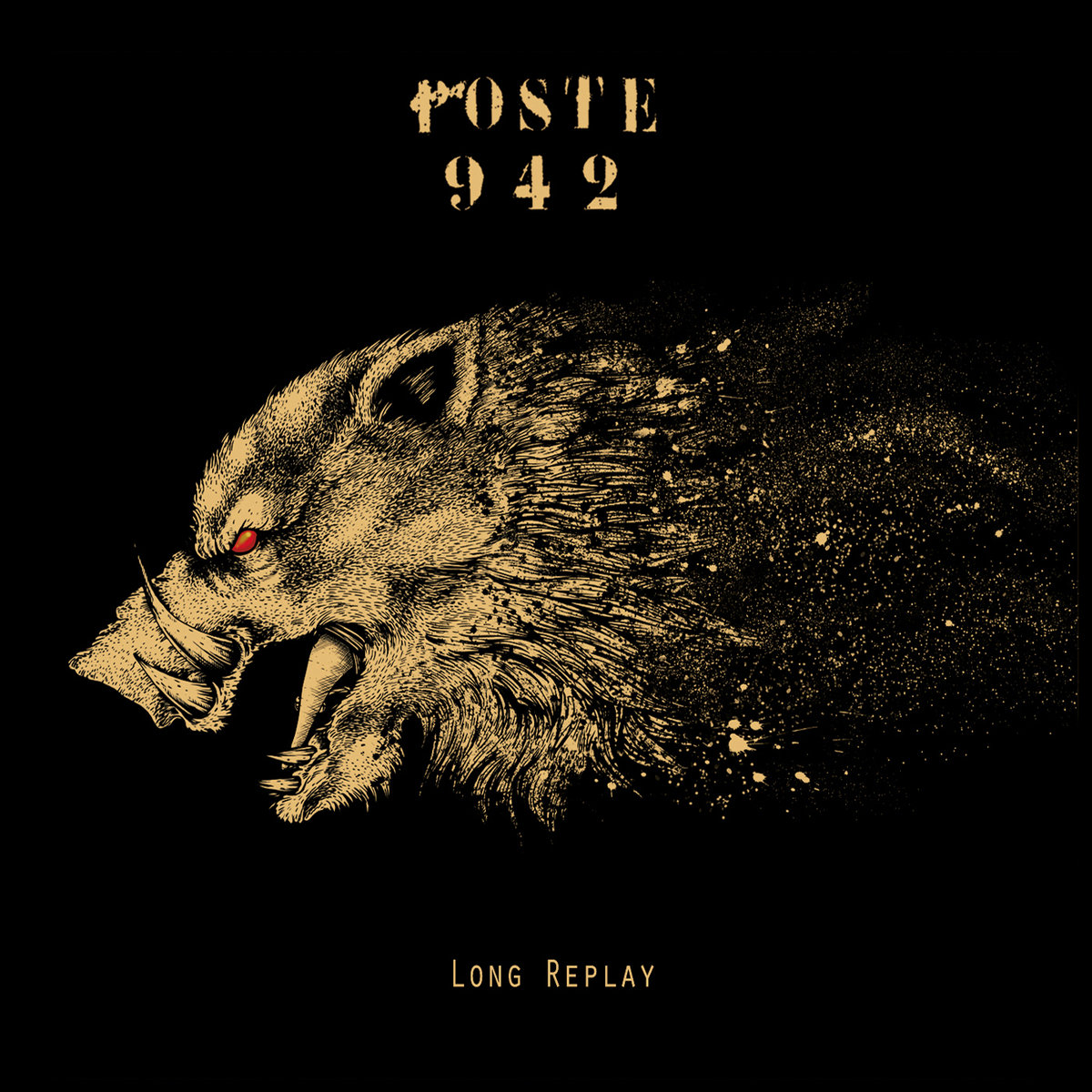 Nothing makes this writer happier than an album that has a bit of everything, keeps me guessing from song to song, but is all done brilliantly. This cannot be an easy feat. Playing multiple genres and categories of music on one album must take precision and care. With so many avenues, it gives much room for mistakes. Poste 942 accomplishes this conquest remarkably well. Hard rock with a bluesy twist and a punk undertone complimented with stoner rock influences and, what is that? A strong surge of grunge? What is not to like? My 90’s heart was soaring on musical waves of my childhood. Long Replay represents a dynamic threshold of raw and gritty music that digs in and stays.

Formed out of Marseille, France in a village called Tourves, Poste942 started orchestrating their musical manifesto in 2010 and consists of band members; Sebastien Usel (vocals), Sebastien Mathieu (guitar), Bruno Pradels (guitar), Ludovic Favro (bass), and Fred Charles (drums). They released their first demo in 2013 which was composed of 8 tracks. They released their first EP October 15, 2014 titled, Extended Play, which had five songs. Two years later, they released their second EP titled Extended Play 2. This EP had three songs and was released June 15, 2016. A year later they released their first full length album consisting of 13 songs and titled, Long Play. The new album is the same playlist as Long Play but includes a new drummer and three bonus songs; “Kill the Princess,” “49.3” with a guitar solo by Pradels, and “Ghostdrinker,” so they cleverly titled it Long Replay.

How to begin. “49.3” has a strong grunge vibe with a stoner rock undercurrent. The lyrics are definitely 90’s sounding. Listen and you will understand what I mean by this. “The Color Red” begins with a solid drum beat and jumps into a sliding guitar riff that crunches into your ears in the most pleasant way. Usel’s vocals have a compelling and powerful flow to them that hit you in the face but in the most smoothest way possible. The oxymoron is interesting and contagious. The guitar riffs, almost three minutes in, gain some momentum as the vocals take on a deep-rooted scream.

“Whiskey” takes a different approach. It is more of a southern rock, Clutch groove with bagpipes! It has a very distinct AC/DC sound, yet it is still completely its’ own. This makes the song that much sweeter. It is groovy and catchy. There is a bit of background vocals to bring it all home. “Punky Booster” is just as it sounds, extreme punk undertones and very short, as most punk songs are. I love the prominent bass lines in this one. “Grace” starts with a solid stoner rock tone then the vocals hit you with the 90’s feel again. When he screams “grace”, you feel it. I really dig the guitar riffs in this one.

“Psycho Love Part.1” might be my favorite on this album. This is unique for me since I usually enjoy the heavier songs on albums, but there is something so raw and heartbreaking about this song. His vocals pull you in and make your heart break. It is slow and steady and real. This translates beautifully into the second song, “Psycho Love Part.II”, a continuation of the previous, but more gritty.

The album ends perfectly with “Kill the Princess”. It is fast and has a taste of Motorhead in the beginning but quickly changes a bit as it goes. It is an almost nine-minute-long song that continues to impress and surprise as it goes. The guitar work is exotic and delicious. When it starts to slow down, you think it is over, then it magnifies into an 80’s type musical composition, and this is where it ends. Or does it? Silence consumes you and you sit wondering if you have heard the last of this album. Shortly, a wolf howls and you realize things have not yet concluded. Someone comes closer, a familiar guitar lick begins, and low and behold, “Ghostbusters” theme song rings out. The lyrics are not quite right though? “Ghostdrinker” rings out along with the previous bagpipes and everything feels right in the world. It is just as you would expect from these guys at this point, because you can tell they are the group of dudes that like to have a good time.

What you won’t get with this album, overproduced music. What you will get is raw and real music. They seem like a band that would be highly entertaining to see because you can tell they love what they do when you listen. Overall it is a fun and diverse album with much to offer the listeners. This could be played while chilling with friends around a campfire, or alone drinking, all by yourself. Hey, I’m not judging. Full of consistent changes and shifts in musical influences, you will feel your toe start tapping and a smile will erupt on your face as you enjoy.