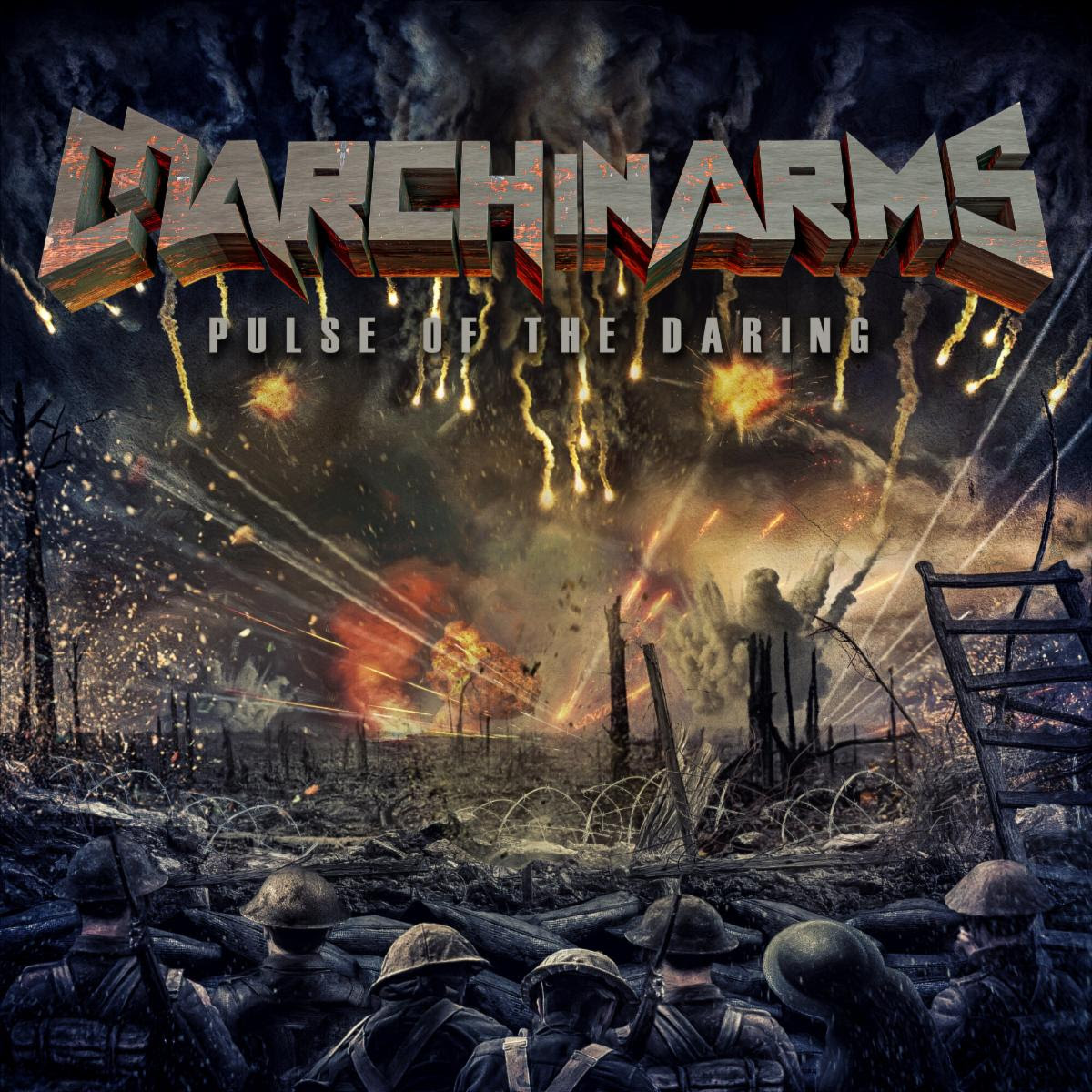 March in Arms – Pulse of the Daring

Sioux Falls, South Dakota is perhaps not what one imagines when they think of American metal, yet this is the home court for March in Arms. The quintet dropped it’s self-titled debut in 2015, and fans have waited five long years for the sophomore follow up, which the band actually initially recorded two years ago. Clearly these guys are something of perfectionist minded mad men. Regardless, Pulse of the Daring is soon to be upon us with 10 new tracks of war-themed heavy metal.

March in Arms formed in 2012 as an offshoot of the thrash/metalcore contingent, Nodes of Ranvier which split in 2007.  Two members of that band formed March in Arms including guitarist Jon Parker and drummer Ryan Knutson. With March in Arms, Knutson moved from behind the kit to become the band’s frontman while Phil Mueller rounded out the lineup on drums with Scott McGuire (ex-The Spill Canvas) joining on bass and Sheldon Swan on guitar. After recording Pulse of the Daring , Mueller and McGuire would depart in December 2019 to be replaced by Collin Citrowske (bass) and Bobby Cook (drums). When MIA formed, the guys shifted away from their former thrash and metalcore roots in Nodes of Ranvier to American power metal with military lyrical themes. It would be easy to describe them as America’s version of Sabaton, and that would be a compliment, but it also doesn’t quite capture the breadth of the MIA sound which also encompasses everything from bands like Metallica to European power metal to NWOBHM.

Pulse of the Daring jumps straight into the fray with “1914” and the front lines of World War I. The track opens with a simple riff and basic drums, before turning into an aggressive, chugging barrage of riffage and weighty rhythms. Knutson’s vocals are startlingly clear yet they have just the right amount of grit and edge. Soaring melodies and sweeping layered vocals hit the right note. To add a sense of poignancy and melancholy, the band adds some nuance and depth with string elements courtesy of Esther Nissen (violin) and Audrey Graber (cello).

“Altar of the Gun” has a chunky guitar tone giving the track a thrashier bite made more so by Knutson’s occasional Hetfield-like vocal delivery. Mueller stands out on this track with numerous pattern shifts and embellishments. This is followed by the album’s first single, “Welcome to the Blitzkreig” which has a bit of an old school Def Leppard feel to the guitar. You know, back when Leppard was among the forerunners of the NWOBHM scene. The song is a tribute to the defiance of the people of London during World War II. The guitar work between Swan, Parker, and Knutson is understated, but in that restraint there are some truly tasty and stand out moments. I appreciate they know when less is more and when more is necessary to serve the song. I’m quickly becoming a real fan of Knutson’s voice. He has his own style and sound, but he can also channel the likes of David Draiman, James Hetfield, Ivan Moody, and others  (intentional or otherwise) without slipping into vocal mimicry.

“Nisei” seems to celebrate the Japanese-American soldiers who fought gallantly during World War II. This is a guess on my part. The undulating rhythms on this track are among my favorites on the record. MIA knows how to strike a mood within their sonic compositions and lyrical context. The album’s title track, “Pulse of the Daring” tackles the Somme Offensive of 1916, which saw the British and the French armies battle the German empire and stands as one of the deadliest battles in the history of warfare. Nearly one million were wounded or killed. Sonically, the song is a mid-tempo affair that ebbs and flows giving the song something of a somber affect.  Very fitting for the topic. McGuire’s bass pulses like a vein in your temple.

The album’s second half begins with “An Act of Valor” and the sound of radio chatter and helicopter blades. The crunchy riffage kicks in with some nice lead harmony counterpoints. Knutson’s vocals have a slight Ivan Moody vibe,as he brings to life the 1993 Battle of Mogadishu, now immortalized by the film Black Hawk Down. Next up is the thrash meets Volbeat groove of “No Year’s Resolution”.  The track swings between grinding and energetic.  Just before the guitar solo there is a slight guitar nod to Thin Lizzy, which I’m guessing was not purposeful, but enjoyable all the same. There are plenty of twists and turns on this track down the stretch. Speaking of thrash, “Thunderbolt” kicks off with that psychotic get-in-the-pit thrash energy patented by Anthrax. Razorwire riffing winds through the verses, while more large power metal melodies and huge vocals carry through the pre-chorus and chorus. Lyrically the song pays homage to the Gatling gun harnessed A-10 war plane.

Closing out the album are the freewheeling onslaught of “Omaha” and the vintage feel of the chugging “Not for Nothing”. This is perhaps the most grandiose track on the album. There is an epicness to the song which makes it a perfect album closer. Gang chants and string elements return.

While it’s been a journey in its making and an extended wait for fans, March in Arms have truly delivered on Pulse of the Daring. Track after track of often emotive, thrashy power metal anthems that also bring important moments in history to the forefront. The guys took their time to get it right, and the results speak for themselves. Well-crafted songs, intriguing lyrics, and strong musical performances all come together over these 10 songs. This is one of 2020s better releases, signed or unsigned. Considering the number of mind-numbingly bad albums by signed acts that cross my desk every week, I’m always somewhat stunned when a band of this caliber is still unsigned. This is heavy metal in 2020, when some of the best talents are DIY heroes. If you haven’t heard of March in Arms before now, Pulse of the Daring is a perfect introduction and a headbanging way to end this crucible known as 2020, because let’s be honest, it’s felt like a battle all year. 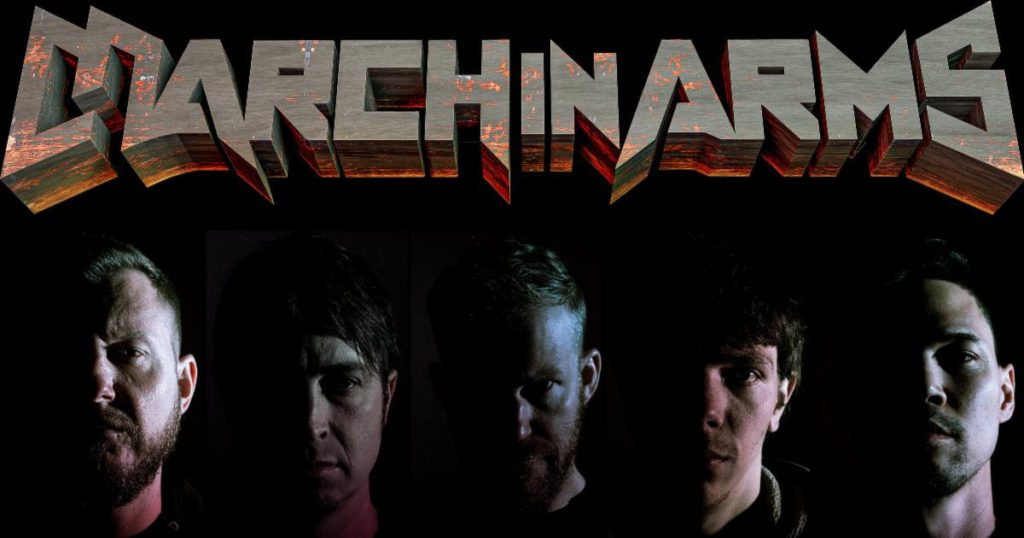