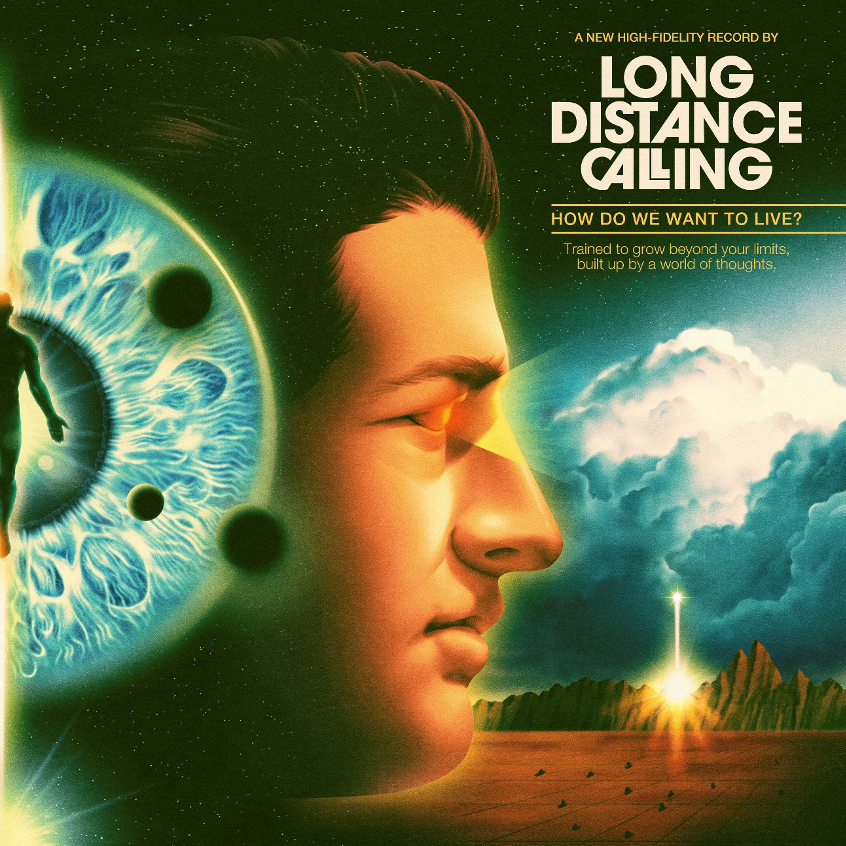 Long Distance Calling – How Do We Want To Live?

How Do We Want To Live?  is the upcoming seventh studio album from Germany’s Long Distance Calling. Currently the band’s line-up consists of David Jordan  and Florian Funtmann on guitars, Jan Hoffmann on bass, and Janosch Rathmer on drums. As you may have noticed, the band does not have a dedicated vocalist, meaning they are primarily a progressive instrumental rock band, though they get away with that mostly by layering vocal samples on top of some very interesting and hypnotic music.

If your first introduction to the Long Distance Calling’s visual element was this album’s cover artwork, you might be a little confused at its appearance, which resembles a book cover from a late-70’s or early-80’s science fiction novel. It’s not the kind of artwork that screams “HEAVY METAL!” the same way traditional thrash metal or Judas Priest album artwork announces, because it’s definitely not a traditional heavy metal kind of record. However, the music is still  heavy in its own non-traditional way.

The album opens with the 1-2 combo of “Curiosity (Part 1)” and “Curiosity (Part 2)”. Immediately the listener is strapped into a listening experience that inspires the feeling of sitting inside the cabin of a spaceship that is moments away from launching into orbit. Part 1 helps the listener mentally prepare for the journey with positive affirmations about curiosity and discovery within the human spirit. Part 2 gives the listener the sensation of taking off and floating through space. Slowly and peacefully at first with speed and tension building up as the bass and drums lock in together for a pulsing rhythm, pushing onward into the unknown. Yet there is one recurring phrase the provides a sense of looming, ominous danger: “Curiosity is a real bastard.”

The science-fiction theme is solidified with more voice samples that refer to A.I. and the potential threat it poses to humanity, which is appropriate for a song titled “Hazard”. From there the album delivers its first single “Voices”, which Long Distance Calling released as a video to promote the record. The video itself perhaps gives some context to the song as it shows a man and his life-like robot companion engaged in a homosexual (robosexual?) relationship. I’ll be honest, without the context of “Hazard”, I was a bit confused as to why the video would portray such sexual overtones because the song itself isn’t exactly dripping with overt sexuality, but with the background context of “Hazard”, it started to make a lot more sense. The music of “Voices” is very melodic, and the band includes a guitar melody that emulates the sound of a robotic voice moaning in passion. The intensity grows as the band plays more and more aggressively, helping the song reach its climax, much like what is shown in the video. Without spoiling the video storyline, it is safe to say the band and director figured out how to visually represent the hazard of a human developing a romantic relationship with a being of artificial intelligence. It is not extremely common for a video to represent a musical storyline so perfectly, especially with a song that doesn’t have lyrics, but the collaborative art blended the two together almost perfectly.

The mid-section of this record progresses with the same futuristic, science-fiction theme. The drums hold groove and interesting rhythms throughout, yet still feel like an extremely solid foundation to layer the guitar melodies upon. The bass pulses along with a nice round, bottom heavy tone and the guitars carry everything with a crisp, dry tone like space dust and meteor rock. For as spacey as the music is, it does not feel like we ever meet any sentient, alien beings. Instead it feels like travelling through vast, empty reaches of darkness illuminated only by the light of distant stars. In a sense, this plays out like the soundtrack to a movie that tells the story of a lone human astronaut on a one-way mission to the other side of the galaxy accompanied only by his robotic co-pilot and the voice of the ship’s navigation system. The human element is there but is outnumbered. His robotic shipmates are intended to give him a sense of companionship, but as the miles stretch on forever and time passes, he simply feels disconnected and alone.

On the song “Beyond Your Limits” the listener is finally treated to a human vocal performance giving the song a feel not entirely different from Phil Collin’s “In the Air Tonight”. Emotionally it feels like this is the final moments of human life. The man himself goes beyond his limits and prepares to meet God or pass into the next plane of existence, and the remainder of the journey is experienced and narrated by the artificial beings. The closing track “Ashes” begins with a voice previously unheard. It may seem strange to introduce a new character so far into the story, but in context it makes perfect sense. The words express anger and disdain for the species that is mankind, not unlike a wrathful God ready to exact the final, eternal punishment for collective bad behavior. The album closes out with no sense of achievement or voice of redemption, and that is certainly by design. The listener should be left feeling like there was never a final destination to be reached, and no new frontiers to discover. Man has one life that ends without hope for another.

It’s somewhat counter-intuitive to think of Long Distance Calling‘s How Do We Want To Live? as a concept album due to the fact that it’s largely instrumental music, but there are certainly enough unifying elements and storyline themes to qualify it as a concept album. This is absolutely the kind of record where you could just lay down, close your eyes and let it take you on a journey through the imagination. If you’re looking for a fairly unique listening experience that doesn’t rely on traditional song structures with repeating verse/chorus/verse structures and instead moves in a linear fashion, then this is definitely something you’ll want to check out. It’s probably not the kind of music you’d want to party and drink beers to, but maybe a nice meditation or psychedelic experience will do the trick.

Continue Reading
How Do We Want To Live?Long Distance Calling
1
Share FacebookTwitterGoogle+ReddItWhatsAppPinterestEmail