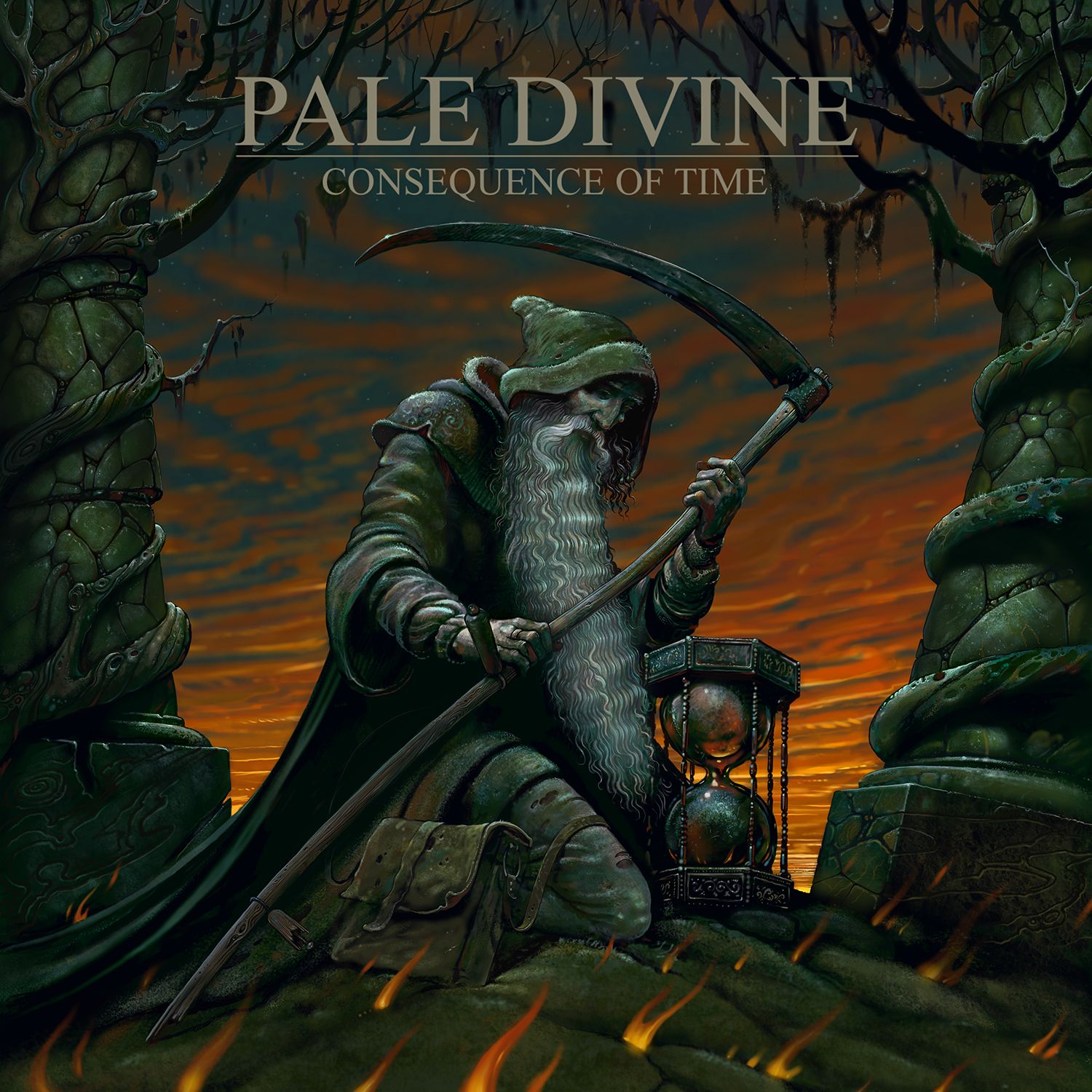 To put into words how I feel about this band and their music, feels almost impossible. The first time I heard one of Pale Divine’s songs, I was immediately drawn to them and entranced. The Pennsylvanian doom quartet’s 2018 self-titled album was my introduction and I quickly went back through the band’s past albums to catch up on what I had been missing. Here I am again, with Consequence of Time, and just as mesmerized. I have had CoT  for over a month and have fought with myself time and time again on how I want to write this review. Time went on, and I decided I needed to sit down and feel it out, see what flows, let my emotions speak for me, so here we are. I can only hope you will enjoy the journey as much as I have.

Celebrating 25 years, Pale Divine has paved a bit of a different path with CoT. Greg Diener continues lead vocals and guitar, but only on about half the album. On their previous record,  Dana Ortt (Beelzefuzz) was added to the mix as second guitarist, but this album Ortt appears quite frequently on lead vocals as well. Darin McCloskey still annihilates the drums, and Ron McGinnis hammers out the bass lines. This musical ensemble has released five albums previously, Consequence of Time is their sixth full-length. Their self-titled album, Pale Divine, made my top ten list of rock and metal albums of 2018. They were number one right ahead of A Perfect Circle’s Eat the Elephant. That says something.

Starting off, track one “Tyrants and Pawns” is a stellar way to begin. Classic Pale Divine with a brilliant and catchy guitar riff. Diener’s vocals are haunting and beautiful with insight lyrics. Further in, an incredible guitar solo with a doomy 60’s vibe erupts. “Your ignorance makes you easy prey”. What an interesting lyric, and I think we can all agree.

“Satan in Starlight” is the first song Ortt takes lead vocals on and it is impressive. I felt a Uriah Heep influence. His vocals ring out in the melodic 60’s high pitch, then angle back to a flowing creamy baseline. I was initially uneasy with the idea, Diener’s vocals has become a beloved voice to my everyday musical endeavors, but the more I listened, the more I thoroughly enjoyed the direction they have taken. This album is a ride, with a roller coaster of vocal changes and instrumental melodies, and I am fully on board.

“Shadow’s Own” starts with a groovy southern style riff. It is short, but full of meat and grit. The instruments all compliment each other so well, yet every one has a different voice. The quick solo has great tone and grips your ears. Listen to this with headphones on, your ears and soul will thank you.

“Broken Martyr” is another Ortt track. I am unsure what the lyrics are particularly about, but it makes me feel heavy and sorrowful. Somehow, it is alluring in all its gloom. I have listened to this album so many times, that this one has really really grown on me. The guitar solos are captivating, your heart starts to beat with the drums, and at one point, the heart lifts briefly before it settles back into that memorable beat.

“Phantasmagoria”. This song is absolutely spellbinding. It begins with a doomy and fuzzy riff and steady drum beat. It is exactly what you want and need with a stoner rock/doom band. The lyrics take you on an expedition of darkness and coldness, but you don’t feel afraid, you feel brave and fulfilled. It almost felt like a siren had presented herself along the path and the confusing emotions exploded into a song. It is eerie and dark and mysterious yet exciting. Might be the favorite on this album.

The album’s title track, although being the longest song on the album, feels like it passes quickly. Instrumentally there is much going on, as Diener wails out his vocals. McCloskey really shines here with his every changing drumming. Enter in the talents of Ortt on the lead guitar and McGinnis with the dark heavy bass notes, you have a recipe for an epic song. About halfway through, Diener’s vocals slow and Ortt jumps in. The mix of the two is haunting and hypnotizing. The entire song slows to a snails pace then picks right back up after you think the song is over. At this point, Ortt takes over lead vocals. “Consequence of Time” is a genius of a song and is closely neck and neck with “Phantasmagoria” as a favorite. The lyrics are magical and might make my Dungeons and Dragons track list with its adventurous feel.

Motorhead like drums and a galloping guitar riff fill the eardrums with “No Escape”. “There is no escape from all of the crosses we bear”. Whoa. The thing I most dig about this one is the thrashy and punk-like vibe I get from it, mixed with stoner rock and haunting vocals. Yep, I’m sold.

Last track, “Saints of Fire” has a heavy riff with a melancholy atmosphere. The musical changes keeps your mind wandering in all directions, wondering what is going to happen next. Lyrically, once again, dark and deep, but refreshing as well. Great finish to a marvelous album.

Consequence of Time is deep and thoughtful with many musical elements, both instrumentally and vocally. It is important to take some time to plug in the headphones and feel this one through. It speaks to the soul and leads you along its harrowing path but with light steps and a full heart. Once again, Pale Divine has created something timeless and breathtaking. Please take the time to jump over to their page and give them some monetary or sharing with your friends love. Our musicians need it more than every now and WE NEED MUSIC.