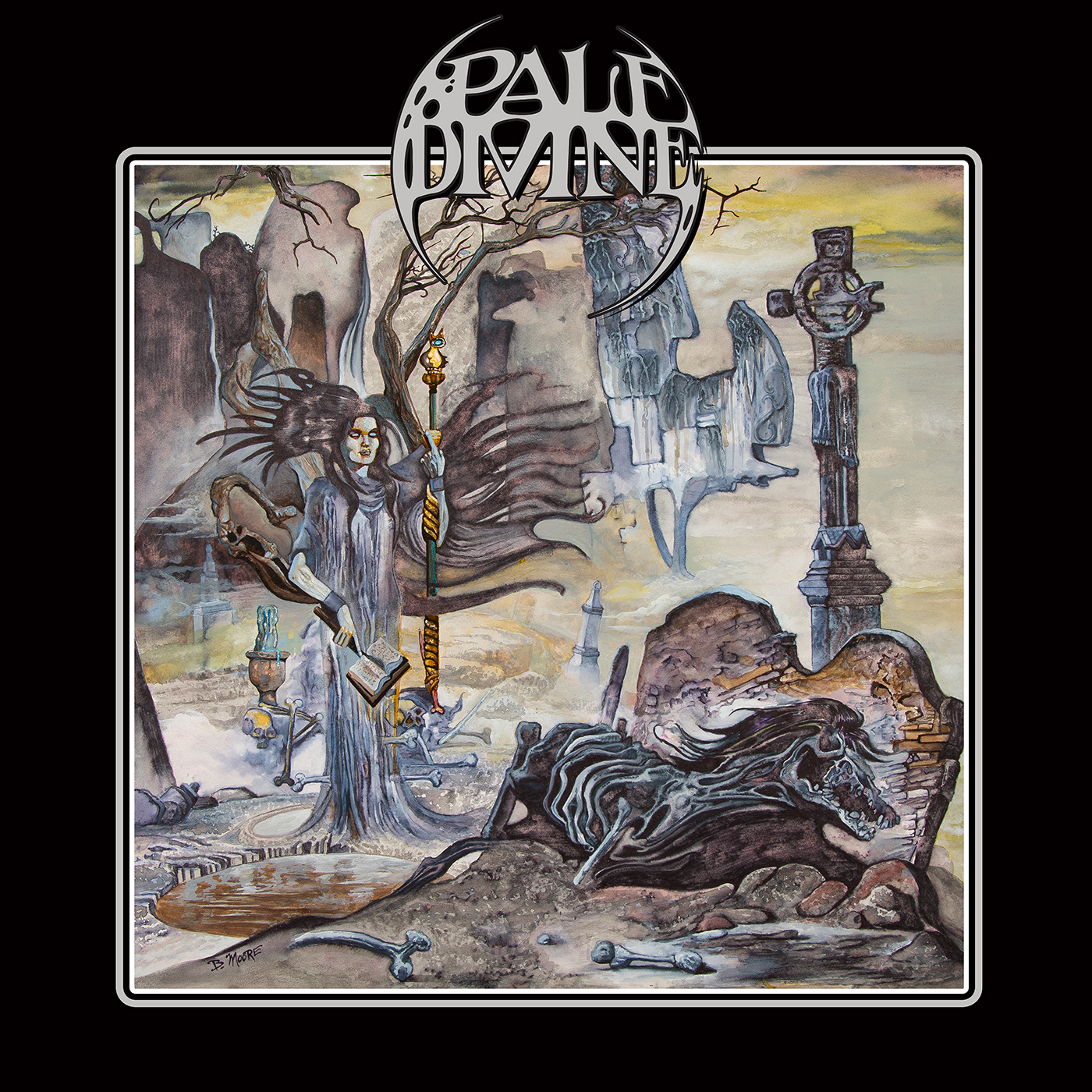 If you have read any of my reviews before, you will know I am a huge fan of doom metal/stoner rock. I love many genres, but my heart settles nicely with this one. I have listened to bands that do it incredibly well, and bands that I tend to get bored with. I will not do reviews on albums I am not fully invested in, because I do not know how to write without heart. With this album, I am not even sure where to start. It is pure wizardry. With every album I review, I usually have a favorite song, one I really want to talk about and I have latched onto. With Pale Divine, I found myself saying, “Ok, this is the one”, after every damn track. Every. Damn. Track. It is perfect, from the moment it starts, to the bitter end. Sorcery I tell you. Before I dig into this magnificent album, let me tell you a little bit about the men behind the magic.

Pale Divine started creating music in 1995 with a shared love of the “fuzz” brought two Pennsylvanians, Greg Diener (guitar, vocals) and Darin McCloskey (drums) together. They went through a period of many bassists and another guitarist over the years before growing their sound by adding bassist Ron McGinnis. Just a few weeks ago they announced exciting news by introducing guirtarist Dana Ortt of Beelzefuzz into the Pale Divine mix. When I started to research more about them, I noticed they would be playing with another band I love, Atala, in Fredrick, Maryland at The Maryland Doom Fest 2019 June 20th-23rd. I asked Atala’s guitarist/vocalist Kyle Stratton about them and he replied, “Good dudes. Heavy stuff”. By the way, check out Atala, they are incredible.

I had the chance to quickly chat with drummer Darin McCloskey, who states

“I know that when we recorded these songs we wanted to progress a bit beyond what we’ve done in the past but still stay true to our past and our original intent when we first came together. In some ways this album seems like a collection of ‘best of’ material that had never been released before, ha ha. I think we managed to stay true to ourselves while still managing to forge ahead creatively.”

Well forging ahead creatively is precisely what they have done. I am blown away. I am still finding it difficult to locate the words I want to use, to begin to express my appreciation and infatuation with this album, but I am going to try.

Let’s start with track one, “Spinning Wheel”. It is a great introduction to what you are going to experience. It starts with a catchy and crunchy riff that quickly becomes a blanket throughout the song. Diener’s vocals are incredible, the epitome of stoner rock, both old and new. The solo, unbelievable. This is a theme with every song, if you want some foreshadowing. This song reminds me of a Iron Maiden type sound. Which is who they credit as one of their influences, along with Black Sabbath, and doom metal bands like Trouble, Candlemass, Pentagram, The Obsessed, Cathedral and Solitude Aeturnus. You may have to read about every song on this album, I cannot help it.

Track two, “Bleeding Soul”, this is where I start to lose my words. It is extraordinary. The lyrics rip my heart out, because I feel it so much. “My heart is cold and heavy, frozen emotionless, and no one sees the torment lying underneath this smiling face, a bleeding soul will find no rest.” Whoa. The musical composition of this song is just as perfect as the lyrics. I have listened to this song over and over again. And over again. I wish I could bottle up this emotion of hearing it initially, because it is beyond powerful. I thought, there is no way there is another song on this album as epic as this one. As I mentioned before, I was wrong. Although, this song still feels like the “winner” of this album, if I could even begin to possibly pick one. Track three, “Chemical Decline”, my thoughts on this song were pretty clear. I will say this, someone messed up bad, and while they are clearly being called out on it, it is about as polite as you can get. This speaks volumes about who these guys are. Hell hath no fury? Not with Pale Divine. It is almost an intervention, “Dude, you messed up, you’re hurting many people you love, you need to make some changes.” 10-4 good buddy. I would be taking a long hard look at myself if someone was giving me this message, because it is done so realistically, rawly, and beautifully.

Track four, “So Low”, fuzz heaven! Starts off with a groovy fuzz riff and some phenomenal bass lines. I kept feeling some Alice in Chains vibes with this one with parts of the vocals and the sound. This is another song that will dig deep into your heart and fill your bones with all the emotions. Again, the solo, its flawless. Then just when you think you know how this song is going to play out, they make some dynamic changes that shift  the course of the song, yet it still fits perfectly. I am not sure I have used the word perfect quite so much in my life. Then the song deviates again into a jam style groove thing with prominent bass sounds. It is fucking exceptional.

“Curse the Shadows” is next. I had a strong The Sword feeling with this song. If you know me, you know this is a huge compliment, because The Sword is one of my all-time favorite bands. Although, of course, Pale Divine started long before The Sword did. The drums and guitar are exquisitely in sync with an incredible stoner rock vibe. The story is highly entertaining and takes you on an epic journey of fantasy and witchcraft. Diener’s haunting vocals are impeccable.

“Shades of Blue”, track six, is astounding. It has a bluesy doom metal sound. It reminds me of 70’s Black Sabbath goodness. You will be asking yourself if you are one of the people who “see the world through shades of blue”. I know I relate. I won’t say much on this song, because I have posted the link below for you to enjoy.

“Silver Tongue” made me think of Corrosion of Conformity, another all-time favorite of mine. It is executed incredibly well and leaves you with the desire to start spreading your truth, individuality, and the rawness that is you. You will not want to hide behind a web of lies or a crowd of masks, you will want to rise above, flaws and all.

The last song, which came much too quickly, is titled, “Ship of Fools”. It also has a blusey feel, but much more haunting than the other. The vocals are deep and dark. It gave me chills, the whole course of the song. Brilliant end to a flawless album. Did I mention the incredible solos on this record? This song is another great example, which finishes off strong with a legendary one.

If there is one thing I can suggest while listening to this album, it is to digest all of it. Every last bit, from the musical genius, to the vocal magic, to the drum perfection, to the ridiculous riff and solo bewitchment, to the awe-inspiring bass, to the lyrical philosophy and relatability. It has quickly made its way into my top ten albums, and that is a tough thing to dive into anymore.

Album Review: BLOODBATH – The Arrow of Satan is Drawn