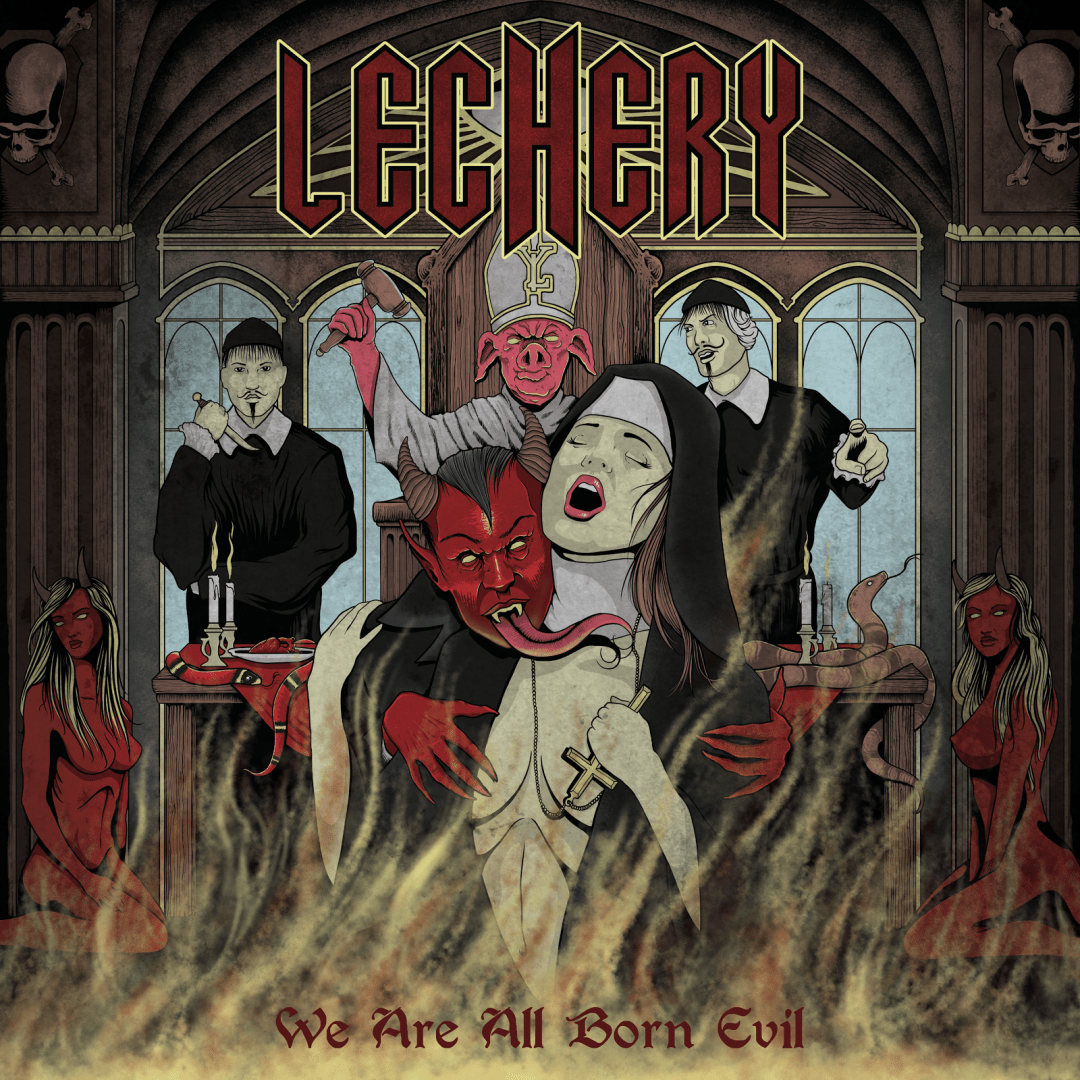 Lechery – We Are All Born Evil

Despite the fact that Sweden’s Lechery has been around for 14 years, or that We Are All Born Evil is the quartet’s third studio album, this is my first experience with their music. Something I almost overlooked, assuming, based on their name, that they were another glam metal throwback. Fortuitously, I gave the album a listen, and it has been on constant play in my vehicle for over a month. Lechery‘s blend of traditional and power metal hits a sweet spot for me that recalls classic German metal band’s such as Accept, Primal Fear, and Scorpions, as well as English stalwarts like Saxon and Judas Priest. There is also a punch of Manowar tossed in for cheese factor. Lechery is a metal band that predominantly sings about metal. They are not setting the world on fire with anything new or unexpected, but We Are All Born Evil is an album that delivers the best of what we love about vintage 80s metal with no apologies.

Lechery came together in 2004 following Martin Bengtsson’s departure from Arch Enemy in 1998. He serves as the band’s vocalist and guitarist. Bengtsson is joined by bassist Martin Karlsson, drummer Kristian Wallman, and guitarist Fredrik Nordstrandh.  The group released its debut album Violator in 2008, followed by In Fire in 2011.

The album opens with the appropriately titled, “Heavy Metal Invasion.” The song is one of many lyrically metal-centric tracks on the album along with “Let It Out” and “Rule the World.” In true 80s fashion, “Heavy Metal Invasion” sits firmly in the anthemic arena with a big shouted gang chorus, and dual guitar leads. “Let it Out” amps up the pace a bit off the stick-work of Wallman. Crisp riffs and more big vocal harmonies pace another fist-in-the-air rocker. “Rule the World” maintains a similar tempo, however, the song is more of a fist-in-your-face war cry for metal. “We are metal, that will never change, brothers and sisters, break the chains, shoulder to shoulder, we rule our world…”

Sandwiched in between the latter tracks is the album’s title song, and one of the record’s most addictive numbers. It resonates with muscular riffs, counterpoint trills, and another gang chorus. Big melodies abound, and the song is hard to shake loose from your cranium once the hook is set.

“Breaker of Chains” has a Doro meets Dio feel to it. Wallman and Karlsson’s rhythmic attack is relentless. Huge harmony vocals flourish, and the dual guitars just soar at 3 minutes in. Some of the tastiest fretwork on the album. Deeper into the record, you find the more traditional chug-and-punch, metal crusher, “Sacrifice”. If this doesn’t get you wailing on your air guitar and flailing at your air drums, you’re no metal head. There is a modern Accept vibe at play here.

The tempo turns into a maelstrom for the epic paean, “Even a Hero Must Die.” Wallman is at his fleet-footed best as he propels the song forward. The track has a big Viking-esque chorus, but the verses and particularly the pre and post solo breakdown have more of an Egyptian flavor.

Lechery doubles-down on the brawny riffage for the mid-tempo beast, “Spineless,” with its addictive chorus:  “When I rise and you fall!” The album closes out in riotous fashion with “Tip of the Whip,” which opens with churning leads and fiery rhythm.

With We Are All Born Evil, Lechery have delivered a record that recalls the best aspects of traditional metal. Before the myriad of ever extreme sub genres exploded in the 90s and aughts, metal balanced heavy riffs and pounding rhythms with memorable melodies and catchy vocals. This is what I think of as true heavy metal. In a year that has seen brilliant new records from Judas Priest and Saxon already, Lechery stands tall and proud alongside their more celebrated brethren. Pick up a copy of We Are All Born Evil and join the heavy metal invasion!