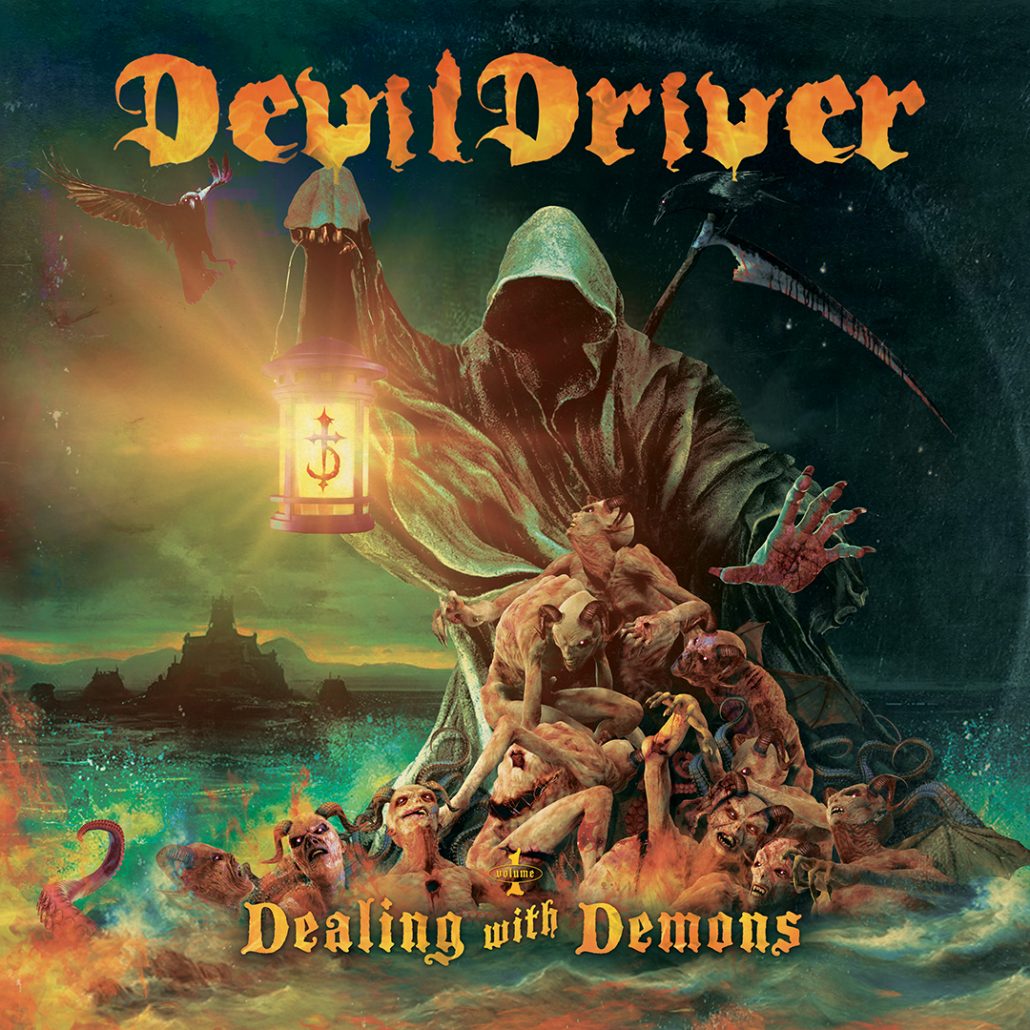 DevilDriver – Dealing with Demons I

Confronting your demons is never an easy feat, yet this is exactly what DevilDriver is doing with the first of two albums titled, Dealing with Demons. Recently, vocalist Dez Fafara has been posting videos explaining which demon each track is facing. While Dez is usually a bit of a closed book, he lays it all on the table with this album release. From personal demons to societal demons, you will most likely be able to find some personal connection with a few of these tracks. Especially with us metalheads, we oddly just want everyone to get along and want the toxicity of the world to perish. People outside of this genre seem to quite understand this.

DevilDriver started their vehicle of metal in 2002 with Fafara, formerly of 90’s explosive metal band, Coal Chamber. A few line-up changes have happened along the way with Fafara remaining the one constant. Now DevilDriver consists of metal badasses: Mike Spreitzer (lead guitar), Diego Ibarra (bass), Neal Tiemann, (rhythm guitar), and Austin D’Amond (drums). They are one of the hardest working bands in metal. Dealing with Demons I is their ninth studio album  with their last original release in 2016 titled, Trust No One. In 2018, they fulfilled one of Dez’  personal goals when they released an album of outlaw country covers titled, Outlaws ‘til the End Vol. 1, which had mixed reviews. I enjoyed it, others not so much. If you were one who hated it, drink your shame soda and try it again.

Dealing with Demons I is a hell of an album. I have listened to it in its’ entirety over twenty times and have not grown weary of it for even a second. I think it is one of their best. Let’s dig in.

Starting off is the track “Keep Away From Me”. It starts with a slow melody that grips your ears as the cymbals and drum beat slowly enter in. Then Dez screams and an epic riff takes off. According to Fafara, these lyrics are about his social anxiety and agoraphobia. This one resonates with me because I too suffer from these things. This is what I love so much about this album, it gives our own demons a name, a lyrical content, a background, and a way to face and get through them through music, which is I think what we all turn to when we need a friend. This was their first single release, and it sets the pace for a killer escapade.

“Vengeance is Clear” begins with a double bass drum beat and insane riff. D’Amond really shines in this one as the guitars gallop along with each other fluidly. “Do or die, vengeance is clear!” It is impossible to sit still as the beat changes a little over halfway through. I dare you to attempt to not strain your neck muscles through this entire banger. I felt a 90’s head-nod with this track, almost a homage to Dez’s past music. I will be very curious to hear his meaning behind this one.

Track three, “Nest of Vipers” was written by Fafara and Tiemann, which Fafara states is the one and only times he has co-written a song with a band member. He states this song is about how money can control loyalty in men and women. It starts with a mellow guitar strum and almost spacey sound. Then hammers into a louder version of the same guitar riff. The gallops in the riffs are some of my favorites on the album. They are ever changing yet extremely catchy. The juts and heavy guitar work makes it a killer track. Listen to the solos in the background. I feel this needs to be mentioned, because the guitar work, this whole song is extraordinary.

“Iona”, was the second song released. Dez states this song is about a ghost story of a woman named Iona, but this song represents society’s obsession with death. He is questioning why people are extremely interested in death like movies and TV shows, i.e. Texas Chainsaw Massacre etc. Musically, it begins almost sinister in tone with a harrowing guitar sound and builds into a heavier instrumental soundscape as Dez screams his vocals like only Dez can.

“Wishing”, is 100% my favorite song on this album and has been recently released for all to hear. This is the first time Dez does clean vocals with DevilDriver. The feel of this one digs so deep, I can listen to it over and over and lose myself completely. The lyrics are existential and make you really think. “And if you take my hand from that very lost place, I will lead you through darkness to that very safe space.” We all need that safe space right now, and DevilDriver is leading us through this album, as uncomfortable as it may be to face those demons. This entire record is nearly perfect and this song tips it to one of the best songs DevilDriver has put out thus far, and that says a lot since they are no sleepers. The guitar solo drives the metaphorical dagger in deeper.

Next song, “You Give Me a Reason to Drink” features Fafara’s son, Simon Blade Fafara. His screams are so similar to his dad’s. It is quite astonishing. This track takes a more direct approach as Dez spits the versus in a more abrupt way, more hasty. The change in the musical composition at the two-minute mark had me banging my 38-year-old head. There are some guttural background screams that I will assume belong to younger Fafara. Once again, watch out for that guitar solo from Spreitzer.

“Witches” comes right out the gate with Fafara’s vocals. D’Amond is musically taking the cake here again, his beats are quick and take some cool turns, yet they fit exactly what the song needs. Once you hear his playing, you will have a difficult time turning your attention away from the drums. Overall, this is a track I find myself replaying in my head long after I have finished it.

The album’s title track starts with a catchy riff and complimenting drum beat, then slows into a slower melody just to pick right up again. “TWELFTH HOUR DEALING WITH DEMONS!” So aggressive, so heavy, so perfect. You can tell there is a lot of energy put into this song, as it blasts out with feeling and anger. This would be a beast to use for getting out that rage and taming the frustrations in life to a more manageable demon. The whole musical composition is in your face heavy fucking metal.

“The Damned Don’t Cry”, starts with a rapid and swift riffage as the drums kick in and maintain the speed. “Wake up! Wake up! Wake up! Stains on my soul!” There is almost a thrashy metal vibe here. “Survive through dire straights!” I think we can all relate to this as well in 2020. Heavy song, killer fast thrashy musicianship, great track.

Last song on the record, “Scars Me Forever”, begins very slow and almost eerie. The pace picks up yet maintains the same melodic tune. The galloping and jutting guitars jump it into a higher gear. I love the guitars in this track especially. “Going down the rabbit hole, try to hold on, but I’m sliding down fast.” Again, enter 2020. I know these lyrics were written before this hellish year, but they fit it perfectly, which is another blessing for us listeners. I wonder if this track has to do with Dez’s musical relationships throughout the years? I don’t know, but I know he is a very hard worker and that must be sometimes difficult for other band members. Some speculation there maybe.

If you don’t love this album right away, you need to take some more time with it. There are samplings of genius writing, compositional excellence, and deep meaning. Take these lyrics, deal with your personal demons, open up those uncomfortable conversations. Most importantly, remember we are all in this life together, all trying to navigate as best as we can. Take Dealing with Demons I and use it as a part of your existential journey. As always, please support our artists right now. Covid has hit the music industry hard, and we need to take care of them now as they have taken care of us all throughout our lives.