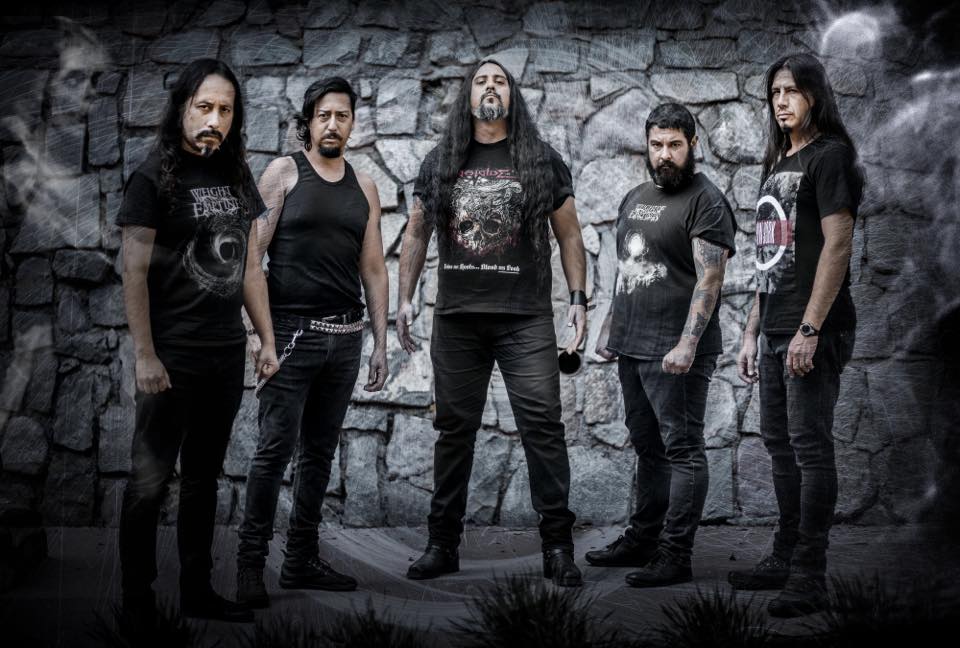 Hello everyone. it’s Ivo again – Metal Nation Radio’s Program Manager, bringing you another interview with a South American band that I came across while checking out the music submissions for our radio station. My latest discovery is Chile’s Weight of Emptiness, and if you are into Progressive Death/Doom Metal, I encourage you to check these guys out! Also, if you like them, go to their band pages, throw ’em a Like, leave a comment and let ’em know Metal Nation brought you there.

Weight Of Emptiness is a metal band that cultivates a mixture of styles among which death, black, progressive and doom metal are distinguished. The quintet formed in 2015 by the former members of the no-longer-existing band Twilight Mist. It features Juan Acevedo and Alejandro Bravo on guitars,  Alejandro Ruiz (Homicide) on vocals, Mauricio Basso (Letargo) on drums, and Mario Urra on bass. It is worth mentioning the participation in the beginning of the band of bassists David Hernández (2015-2016) and Manuel Villarroel (2016-2018).

On March 4, 2017 the band released their debut record Anfractuous Moments For Redemption, with which they had a tour in Mexico in 2017. The LP and was nominated for the Listener’s Award for Best Extreme Metal Album.
On October 31, 2019 they released their second record Conquering The Deep Cycle under the Australis Records label; touring Spain, Romania, Bulgaria, Argentina and Chile for their album promotion. The band is currently located in city of Buin, in the Metropolitan Region of Santiago, Chile. I recently had a chance to chat with guitarist Juan Acevedo about the new album, the Covid pandemic, and more.

Greetings from Metal Nation Radio! Hope you guys are doing well during these crazy times we live in!  How’s the whole virus-madness affecting you as a band?

Greetings to the friends of Metal Nation Radio. Well, the virus with respect to the band has had good and bad affects. Within the bad, we have canceled shows and international tours, also the filming of a video clip, also we have not been able to get together to rehearse since March. On the other hand, it has allowed us to have the time to compose new music, with new emotions.”

Describe the songwriting process for your latest release, Conquering The Deep Cycle. 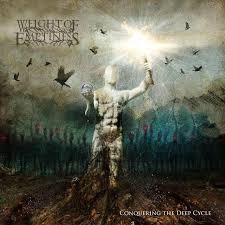 The album Conquering The Deep Cycle that we released in August 2019, had a relatively short composition process, compared to the previous album. We had the goal of releasing it in mid-2019, since we had a tour in Europe scheduled for September 2019. For this reason, during 2018, each of us began to compose music, while at the same time we continued to show the music from the previous album live. But during the first part of the year 2019, we stopped the shows to get fully into finishing the compositions, writing lyrics and recording the album in April 2019. In between, we had a change in the lineup – Mario Urra (bass) joined the band in late 2018, who was a fundamental contribution to get the album out on time. It was an arduous process and a lot of dedication to achieve the objective. We draw up a plan, program the stages and meet the objectives.

What inspired the album title and what are the main lyrical topics in it?

The band wants to show in general the internal processes of the human being. In the case of this album, the idea was to show the process of Conquest or emergence of the human being, struggling with its own fears through a knowledge of itself and the reality that surrounds us, to conquer its own deep cycle. In this sense, the lyrics talk about feelings, pains and situations that are discovered and serve to, through the flame of knowledge, gradually conquer these pains, control them and move forward.”

And my favorite question – What inspired your band name? Why Weight of Emptiness?

We formed the band a few years ago, when we were in our mid-thirties, so we had experienced something. We were no longer so young and we had suffered sad things and little by little we had overcome them. In that sense, we had that tremendous weight on our shoulders, the weight of existence. The inner emptiness, the wondering if it was all worth it. Many experiences and feelings are kept deep in our subconscious memory. That was the weight of the void that we wanted to know and free ourselves from. In outer space the emptiness has no weight, however the inner emptiness can be a tremendous burden.”

How has your sound progressed/evolved since your 2016 debut EP Anfractuous?

At first we were a group of people who wanted to compose music, but despite having been playing since the mid ’90s, we did not have so much technical knowledge of how to do things, that’s why we began to listen advice from many people who taught us how to record better, play better, get better instruments and equipment to make the music we wanted, to transmit sound the best possible way. Richard Iturra, the engineer who has supported us in mixing and mastering, is someone talented and has a continuous learning process with us, so that we do sounds better and better. On stage, the band is also in a continuous process of improving the sound and also improving the staging to achieve an unforgettable experience for the audience.”

Who were your biggest influences and inspirations back when you got started with metal music?

I personally started listening to Metal in the early ’90s, that’s why bands like Iron Maiden, Metallica, Slayer, Megadeth, Sepultura among others, blew my mind off. But over the time I started to listen to many European bands from the ’90s that have influenced me a lot in the way I compose, such as Emperor, Paradise Lost, My Dying Bride, At The Gates, Opeth, Amorphis, Borknagar, Dark Tranquility, among others. The ’90s was a wonderful time for Metal.”

I absolutely agree with that last statement! Do you remember the first metal gig you’ve ever attended?

The first international band I saw was Iron Maiden in 1996, on “The X Factour” tour. Unforgettable.”

I see you’ve toured Europe in 2019, with gigs in Spain, Romania and Bulgaria. Those are very specific places, especially the last two, neither of which are close to South America. Can you tell us more about how that came to be, and what that experience was like for you?

Playing outside of our country started in 2017 with a tour we had in Mexico to show our first album Anfractuous Moments For Redemption (2017), which was incredible because we had never left our country before, and thanks to music we did it. That opened our minds and doors to new horizons and allowed us to visit Argentina as well. So for this new album we could go further and travel to Europe, for which we contacted people who might be interested and that’s how we had 9 shows that covered cities in Spain, Romania and Bulgaria in September 2019, to start with the promotion of our new album. We also returned to Argentina to play a couple of festivals. Traveling outside our country to show our music is something wonderful, you can meet incredible people, wonderful places and it allows you to know the realities of other latitudes, create ties and get contacts. and most importantly – friends.”

What’s your biggest or most memorable live gig with Weight of Emptiness so far?

The show that we gave at the end of last year in a festival called “Destrucción de Fin De Ano” in Chile was incredible. Many people, large stage and everything necessary to give a good show, many lights, smoke machines, giant screen, good sound equipment and the most important – people really enjoyed our show. Some already knew us, other seen us for first time. It was really amazing.”

Aside from the cancellation of all public events at the moment (due to the Covid-19 pandemic) how’s the death metal scene in Chile, in general?

Chile has always been characterized by having a large number of death metal bands, such as Criminal, Pentagram, Homicide and Torturer among the classic bands that I like the most. However, today there are an infinity of good quality death metal bands. Bands such as Timecode, Bleak Flesh, Recrucide, Psicosis among others, that keep the flame of death metal alive in our country. In addition there are bands that regularly tour Europe showing their death metal such as Lefutray, Sadism, Thornafire, Umblessed and Human Vestige among others.”

What’s next for Weight of Emptiness?

We’ve had a tour to Europe scheduled for this year in which we were going to participate in a festival with well known bands, but we had to cancel it due to the pandemic. We hope to do it next year. We hope as soon as we can leave home to record a new video clip, return to the stage to promote the new album. Meanwhile, we will continue composing at home in order to record in the medium term the third album of the band. It would be incredible.”

We invite you to listen to our albums “Anfractuous Moments for Redemption” (2017) and “Conquering The Deep Cycle” (2019) which are available on almost all digital platforms. Also on our YouTube channel you can see our five video clips. Follow us on our social networks (Facebook, Instagram, Twitter) and visit our official website www.weightofemptiness.com to learn more about the band.

Thank you very much Juan, and best of luck in your future endeavours!

Thank you very much for the interview and to all Metal Nation Radio listeners and followers we say: Stay Unbreakable!!!