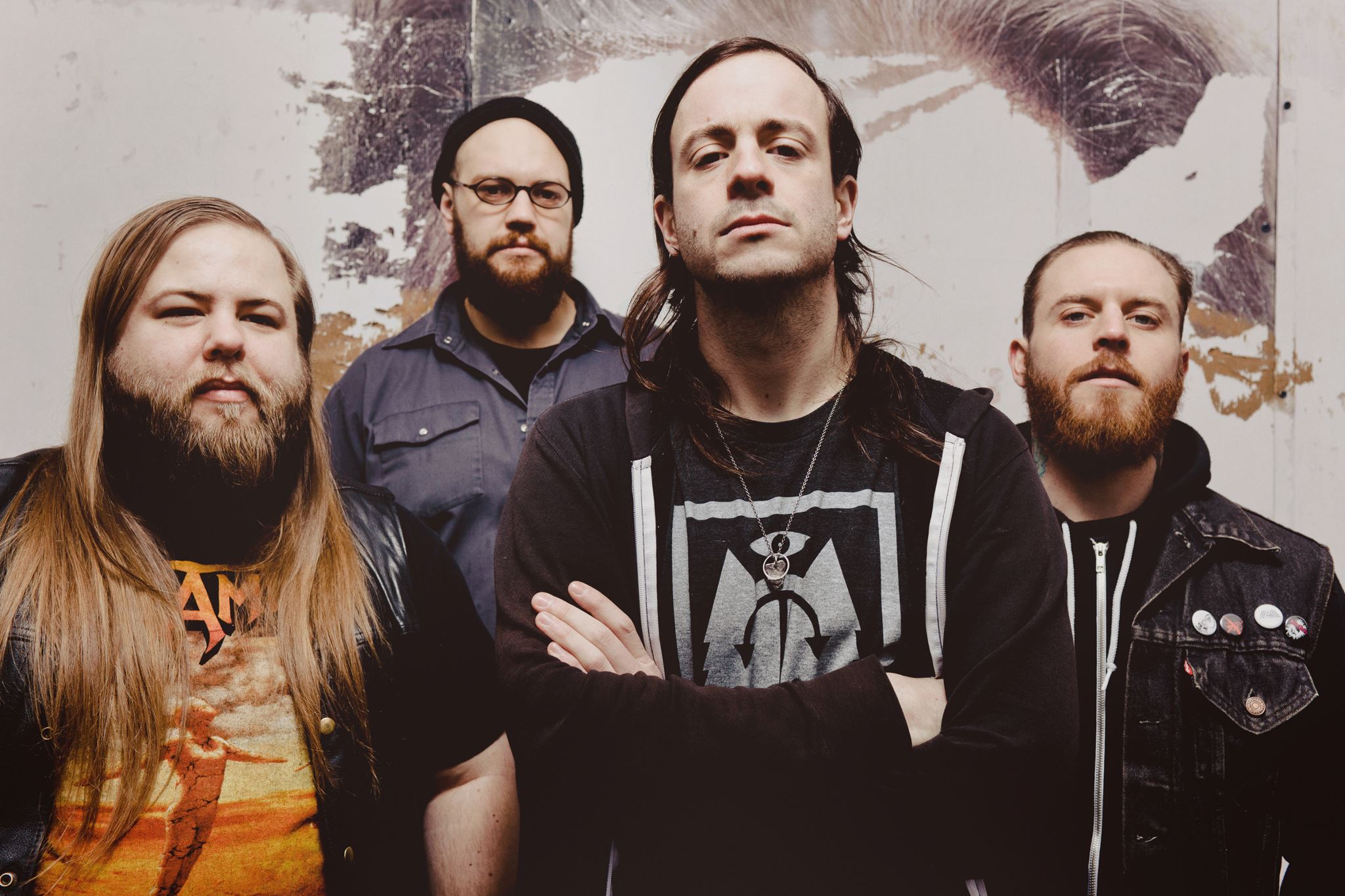 This weekend iconic Canadian punk band Cancer Bats kick off a world tour in celebration of the tenth anniversary of Hail Destroyer. Based out of Toronto, the group has been tearing up the hardcore scenes in Canada and beyond since 2004. In that time they have put out five albums, including their most recent, Searching for Zero, which was released in 2015. The current lineup consists of vocalist Liam Cormier, guitarist Scott Middleton, drummer Mike Peters and bassist Jaye R. Schwarzer.

In advance of the tour, Cormier took some time to chat with us about the band’s history, digital philosophy, and how they’ve become internationally famous while skipping the U.S.

You’ve said in a previous interview that the track Hail Destroyer is what really helped to kick things off for you guys – what do you think it was about this song that had this affect?

I think it was definitely us moving into a heavier and more aggressive kind of sound. We had some heavier stuff on Birthing the Giant, and songs like “Pneumonia Hawk” and “French Immersion” had started doing really well and had been getting rotation on Much Music and all the stuff like that. But then once we came out with “Hail Destroyer,” I feel like that was the song that took us to that next level, where we were combining everything we had come to be known for. And it also had a different kind of message in terms of the song itself. So combining all of those pieces within three minutes, I felt like that got us a lot of attention, and people started really gravitating towards that song.

Why was it that you chose to do an anniversary tour for Hail Destroyer, rather than a few years ago for Birthing The Giant?

Hail Destroyer was the big turning point in our career. That was when we started getting bigger tours and doing all these things, but also we were on the cover on a lot of magazines, and that sort of stuff. So we were like, okay, this is a high note in our career.

Will there be any special re-releases of the album to accompany the tour?

We hadn’t planned on doing anything specifically. We still have a bunch of copies of the LP, we’re definitely going to be selling those at shows. We had talked about maybe doing a special silkscreen cover, or maybe a silkscreen poster, but nah, there won’t be any reissues. Especially because it’s all on our shoulders. We have the rights back to all of our albums and everything, but at the same time we’re not flush with cash, so we’re not like ‘Ohh we can just invest all this money!’ We’re like, ‘Oh, okay, we have to kind of like, sell off the records that we still have.’ So we’re still, you know, working with what we got.

There was recently an interview with Periphery’s Misha Mansoor where he talked about many musicians no longer being able to do music as their full-time job. Does this align with your experiences?

We started the band in 2005 so that’s after the decline of the CD sales and things like that in the first place, so we’ve never had revenue from record sales. So I think that being said, we do have these pieces that we sell from stage, but as far as attacking an entire international release, that’s something that we still need to figure out. For us it’s always been streaming, because our files have always have always been shared. MySpace and YouTube and all those things helped us to grow our career. For us it’s always been the live show, and it’s always been touring. So, in that respect it’s business as usual, same way it was in 2008.

Any strong feelings on pirating and streaming, then? 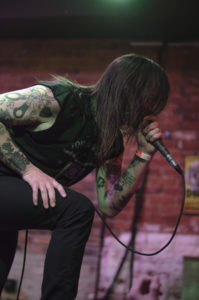 We’ve always been a band that’s really embraced the digital end of things, because for us, like I said, Hail Destroyer wouldn’t have been as big. It’s actually our lowest selling album, as far as sales, but it’s our biggest album as far as like, international recognition, and attention, and the tours that we were doing. So there’s a perfect example of how everyone just shared this record, and we were totally cool with that. Because again, our money just came from touring, and always has.

I’d rather have everyone access these songs and come out to shows and party along with us, than have to worry about, you know, like, what CDs we’re selling and have that dictate where we’re touring. We’re just like ‘Oh, you know who our band is? Sick, we’ll show up.’

So is that how you chose the cities for the Hail Destroyer anniversary tour?

This definitely doesn’t reflect all of the cities we would liked to have visited. With the time constraint we tried to do as best we could, and to make it a quick little world tour. But obviously there are tons of places that I wish we could also include, especially in mainland Europe. Like, I don’t want anyone to take offence that we’re only playing a few select dates here and there. It’s more just because of the time constraints that we have in life.

Do you think that being a Canadian band has made a difference to your touring success one way or the other? 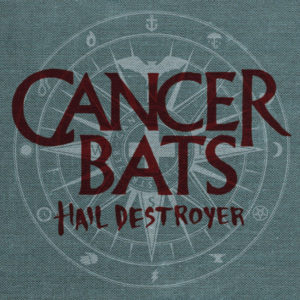 I do think so. I think there’s certain spots, like in Scandinavia, people love Danko Jones, and so I think they look to other Canadian bands for what else is happening in that scene. Or in the U.K. they love Alexisonfire, so for them, they would always be asking what bands should they be checking out from Canada. And AOF would be like ‘Ohh, Cancer Bats and Attack in Black, and you should check out Come Back Kid.’ Canada has this reputation internationally for being a really amazing music community.

When you go to the states you have huge, amazing music scenes in every city, so I feel like in some of those cases, like they don’t need Canadian bands because they already have so many good bands of their own. So that’s why I think is why we’ve gravitated more towards Europe, where they don’t have as big of scenes themselves. We’re like, ‘Oh you guys are missing a twangy hardcore band? Okay, we’ll come play in your town.’

Are you into having minors attend Cancer Bats shows?

Yeah, I think it’s awesome when there’s all ages shows that can happen, and I mean, we all grew up going to shows from when we were ten and eleven. Going to see punk bands and hardcore bands like that kind of like shaped our entire lives, so we try to play as many all ages shows as we can. You can’t always have the perfect situation, but on our last east coast tour we played two all ages shows in Fredericton and Sydney, Nova Scotia. If we have the opportunity we’ll always try to take it, just because it’s awesome and we’ve been there too.

On that last tour there were enough kids to make it worthwhile. And even if there’s a handful, as long as the over 18s or over 19s don’t care, then I think it’s worth doing it. Because, again, that’s how your band is going to continue. And it just sucks being a kid sometimes. All the shows are for bar ages, and you’re 12 years old. You know that seven years from now when you get to go see these bands, all or most of them would have broken up.

Any advice for bands looking to set out on their first tours?

Just go for it. I feel like we do get approached by a lot of bands who are like ‘we’re gonna go to the east coast!’ And we’re like ‘sick, do it! Make sure you have merch! Go for it!’

We’ve been super fortunate to have gone to as many places as we have. I realize there are a lot of bands that are way bigger than us that haven’t even gone to some of the places that we have. So I definitely feel really fortunate that we’ve had those opportunities.

Are there any fan interactions that really stand out for you?

Actually, speaking of international, I remember back in 2007 we were going to Australia for the first time, and we had a layover in Singapore. This kid was working at a coffee shop, and I went up to him and I was like, ‘Hey, I’m on a layover, do you guys accept Euros?’ ‘Cause all I had was Euros cash on me, and he was like, ‘Yeah, we accept Euros, but, you’re the singer of the Cancer Bats, so everything is free.’

And this is was 2007, after our first record. And I was just like ‘This is insane. We’re in Singapore, and there’s this kid who knows who my band is.’ So we ended up taking photos and hanging out with this guy and giving him a 7-inch and all this stuff. That was like the biggest mind blow, and I feel like I’ve yet to have something like that come out of left field again. Like I was saying about digital – our records don’t get sold in Singapore. We don’t have a record label. This was purely because of the internet that this kid knows about my band, and that is the sickest thing ever. It was so wild. It was definitely one of the coolest things that has ever happened in my life.

It’s been about three years since Searching for Zero was released, can fans expect anything new soon?

I wouldn’t say anytime soon. I think we’re slowly chipping away at some new stuff, and like, our drummer lives in Winnipeg, and he and his wife have a kid, so we’re definitely taking our time, but I think at some point we’ll have some new stuff for sure

The Ten Years of Hail Destroyer tour kicks off this Friday night at Lee’s Palace in Toronto, and wraps up in Montreal on May 19th for Pouzza Fest 8. Tickets still available for select dates.

Since this article was originally published, Cancer Bats put out a surprise release of their sixth full-length albumThe Spark That Moves. 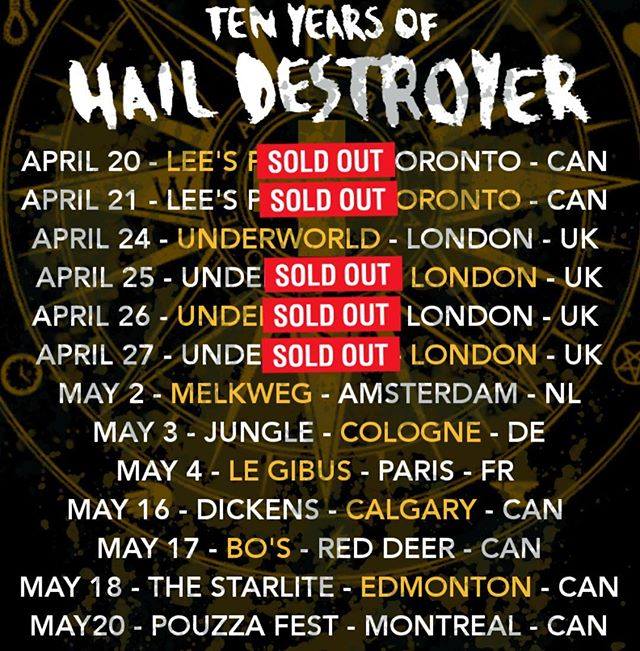