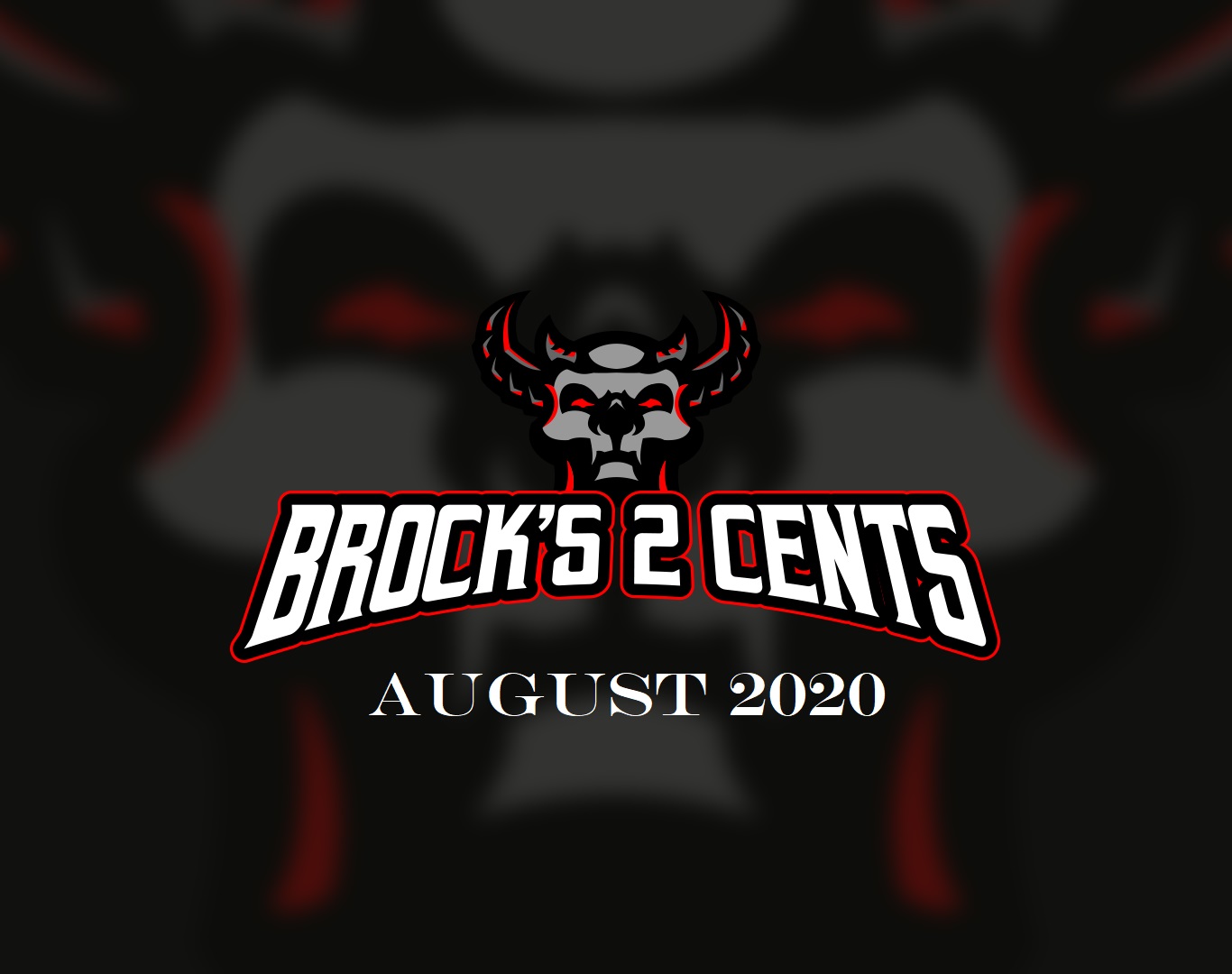 Another month of this Covid-19 b*llsh*t with no concerts/tours and I’m coming to the realization that I might not see a concert this year. I’m already annoyed, pissed off, etc.. but a whole year without a show, I might actually lose my mind. All that I can do is keep listening to new albums so here is my reviews of recently released albums that I think you should know about. Forget about these in depth reviews, I’m bringing you quick reviews on multiple releases to help you guide your way through the METAL world today!
BASICALLY THIS IS JUST MY OPINION, LIKE IT OR NOT…
Ratings: [0(sucks) to 5(awesome)]
{Format: Band – album title = rating/style of metal. review} 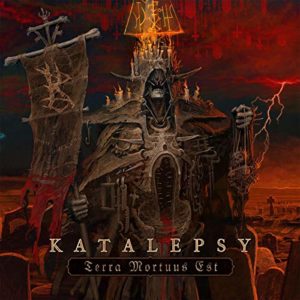 KATALEPSY – Terra Mortuus Est = 3.75/5 |Unique Leader |Brutal Death Metal
They have returned! 4 years later KATALEPSY delivers their 3rd album Terra Mortuus Est and right off the back you can hear more of their old self’s in these songs. Their last album Gravenous Hour went a little to far right on the technical side, it was a damn good album but the reason I got into KATALEPSY was the brutal grooves. Terra Mortuus Est is a good mix of both! Their debut album Autopsychosis is still my fav, but this album gives it a run for its money! A little disappointed the digital single they released last year, “The Beast of Nod”, is not on the album, that song is crushing and would fit perfect on this album. This is a killer album, also has that grows upon you factor as you listen more and will be in my top albums of 2020! A must for DM fans! 11 tracks, 5 are killer and 4 are good!
ffo: PATHOLOGY, DISAVOWED, CEREBRAL BORE, KRONOS, ANALEPSY 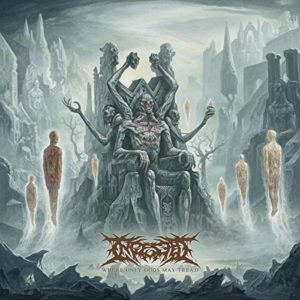 INGESTED – Where Only Gods May Tread = 1.5/5 |Unique Leader |Brutal Slam Death Metal
I’ve been an average fan of INGESTED since the beginning and enjoyed their albums until their last EP Call of the Void which had a strong black metal influence and I didn’t like it at all. So, I wasn’t sure what to expect with their 5th album Where Only Gods May Tread and what was delivered is kinda boring and lackluster. Compared to their other albums, this is in last place. I’m thoroughly disappointed in this. 10 tracks, 2 are killer and 5 are OK.
ffo: WITHIN DESTRUCTION, ACRANIUS, CATTLE DECAPITATION, DESPISED ICON, CEREBRAL BORE 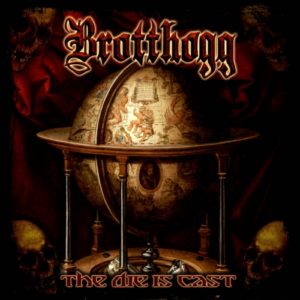 BROTTHOGG – The Die is Cast = 3.75/5 |Independent |Progressive Black/Death Metal
I originally checked this band out last year, their debut album, because of the name thinking it was going to be some funny or lame folk sounding metal but was blown away when some top notch DM hit my ears! Their debut EP and 1st album were both damn good! Now, 2 years later since forming, their sophomore album The Die is Cast keeps delivering some top notch DM with a touch of BM and other euro metal influences. I’m really amazed this band is not signed. The Die Is Cast is just an incredible as their previous releases! If you like blackened DM this is a must!!! 7 tracks, 3 are killer and 3 are good!
ffo: [mid-era] DIMMU BORGIR, SUSPERIA, EMPEROR, KEEP OF KALESSIN, SHYLMAGOGHNAR 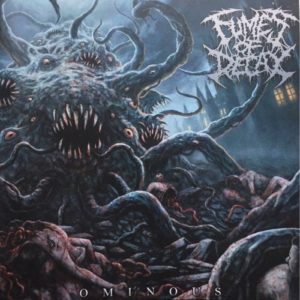 FUMES OF DECAY – Ominous = 3.75/5 |Sevared |Brutal Death Metal
Yet again, if it’s DM and comes from the Netherlands or Italy, you need to take a listen because 70% of the time its gonna be a good release! FUMES OF DECAY, Netherlands, debut album Devouring the Excavated was top notch brutal DM and now the sophomore album Ominous drops another splatter of top notch brutality! If you love fast blasting DM with some headbanging grooves, this is a must! This band is there battling for one of the best in the genre just too bad it took them 9 years to get another album out. Ominous is even better than their 1st so brutal DM fans take heed! 10 tracks, 5 are killer and 3 are good!
ffo: ODIOUS MORTEM, NEAR DEATH CONDITION, PATHOLOGY, SICKENING, SEPTYCAL GORGE 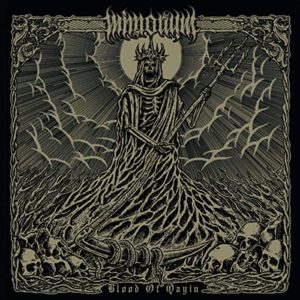 MIMORIUM – Blood of Qayin = 3.5/5 |Debemur Morti |Melodic Black Metal
Sophomore album from this Finnish BM band and its a lot better than the debut! Blood of Qayin is a lot faster and well written! The album is not overall melodic, there’s just a few moments here and there. Blood of Qayin is a fast paced top quality slab of BM and very promising that this band might be dominating here in the near future! If blasting BM is your thing then check this out! 8 tracks, 4 are killer and 3 are good!
ffo: BEHEXEN, GORGOROTH, NAGLFAR, BLACK HORIZONS, DARK FUNERAL 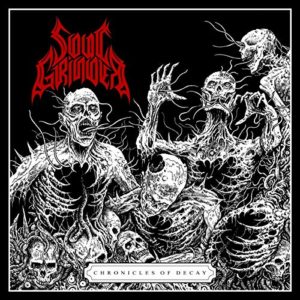 SOUL GRINDER – Chronicles of Decay = 3/5 |Black Sunset |Death Metal
A new band from Germany bringing that Old School Euro sounding DM but packs in tons of blasting! This band takes the greatness from the old school and adds a personal modern touch to offer you a great slab of DM with Chronicles of Decay! With some serious musicianship they go from blasting speed to steamrolling groove to melodic riffs to keep the songs interesting! The album starts off incredible with the first 5 tracks then the album kinda falls off from there (I think a few songs near the end could’ve been left off this album) but this is a great debut album and fans of Euro DM should definitely check this out! 11 tracks, 4 are killer and 4 are good.
ffo: FLESHCRAWL, ZYKLON, ENDSEEKER, REVEL IN FLESH, BOLT THROWER, OBSCENITY

JUST BEFORE DAWN – Who Knows What the Dark Brings = 1.25/5 |Raw Skull |Death Metal
Been a fan of this band since I heard their debut album Precis Innan Gryningen, total BOLT THROWER/Euro old school DM worship! Their debut and next 2 full lengths are great but after that they’ve released 3 EPs, this being the third and all the EPs have been more on the slower/doomier side, which is OK, but not really my cup ‘o tea. This new EP Who Knows What the Dark Brings is 3 tracks, about 15 minutes long and honestly doesn’t really keep my attention. Hopefully the pick the pace back up for future releases. 3 tracks, 1 is good, 1 is OK.
ffo: BOLT THROWER, HAIL OF BULLETS, MEMORIAM, ASPHYX 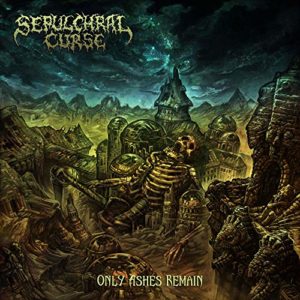 SEPULCHRAL CURSE – Only Ashes Remain = 3.5/5 |Transcending Obscurity |Old School Death Metal
SEPULCHRAL CURSE finally release their debut album after two OK sounding EPs which were really nothing to write home about. Six years after their creation the debut album Only Ashes Remains is 100% better than their EPs! If you dig old school raw European sounding death metal with touch of BM then you need to check this band out. A very strong release that nudges themselves into the top realm of the old school DM genre. 7 tracks, 3 are killer and 3 are good!
ffo: EARTH ROT, LANTERN, INCANTATION, LVCIFYRE 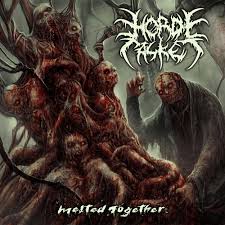 HORDE CASKET – Melted Together = 3/5 |Pathologically Explicit |Brutal Death Metal
HORDE CASKET is a decent DM band that’s been around since the mid 2000s and with their 5th album Melted Together, the band is still fine tuning their sound of brutal DM. Mostly this album is a frenzy pace of blasting, but also offer some moments of slamming riffs to break things up here and there. After jamming to this for awhile I can say this is probably their best album to date! The first half of the album is OK but the back half is killer! HORDE CASKET has been a middle of the pack BDM band but Melted Together shows they’re pushing up towards to the top of the genre! If you like brutal DM and DM that has that mid-west sound, give it a listen! 8 tracks, 3 are killer and 4 are good!
ffo: REGURGITATION, PROSTITUTE DISFIGUREMENT, DISGORGE(US), NECROTIC DISGORGEMENT 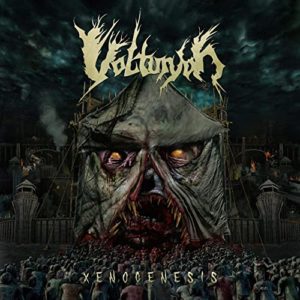 VOLTURYON – Xenogenesis = 2/5 |ViciSolum |Death Metal
VOLTURYON has been pumping out some decent DM since 2008, their EP Human Demolition and third album Cleansed By Carnage are my favs. Their 4th album, 6 years after the last one, Xenogensis introduces a few new influences to the normal VOLTURYON sound. The new vocalist sounds a lot like Randy Blythe of LAMB OF GOD growling DM style, which also I hear some LAMB OF GOD here and there on this. It’s still VOLTURYON but the few changes in sound kinda takes away from the brutality I’m expected too. It’s worth checking out! 11 tracks, 3 are killer and 5 are good!
ffo: CENTINEX, GRAVE, CANNIBAL CORPSE, ABORTED, LAMB OF GOD 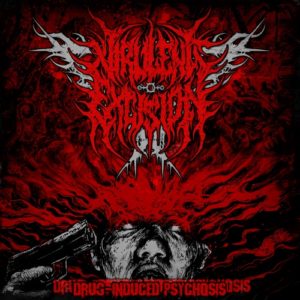 VIRULENT EXCISION – Drug-Induced Psychosis – 2.5/5 |Brutal Mind |Brutal Death Metal
A decent debut EP of some brutal groove DM from Chicago. The production on this EP is top notch and helps deliver the brutality to your eardrums! A lot of grooves going on but not flat-out slam style. If you love brutal DM that gives your neck a workout this is a must to check out! I dig this, the band is promising and I’m looking forward to future releases! 5 tracks, 2 are killer and 2 are OK!
ffo: GUTTURAL SECRETE, AMPUTATED, KRAANIUM, VULVECTOMY, DEVOURMENT 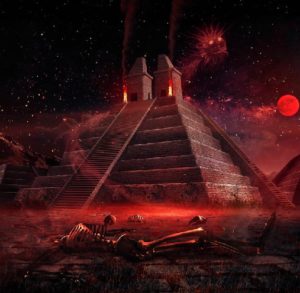 TORMENTED BRUTALITY – Chronicles of Apocalypse = 2.5/5 |Independent |Death Metal
Another one of these bands where a very talented musician enlist the help of other musicians across the world to help his vision come true! Larry Anthony Kennon from the Philippines wrote a damn good debut EP but need help from members of BENIGHTED, FLESHBOMB, NEUROGENIC, PROFANITY and more to bring this EP to light! There’s a strong thrash vibe to his DM! If you like DM with some strong thrash roots to it, check this out! Its a good debut EP, some very promising stuff here. I dig this and looking forward to future releases! 6 tracks, 3 are killer and 2 are good.
ffo: PROTECTOR, LOUDBLAST, THANATOS, AGRESSOR, MEGADETH 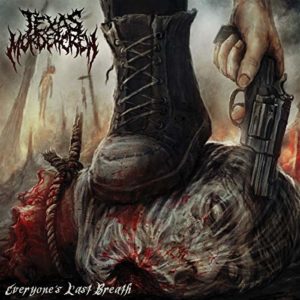 TEXAS MURDER CREW – Everyone’s Last Breath = 1.5/5 |Comatose |Brutal Death Metal
A new band from Dallas featuring Kevin Clark (DEVOURMENT, SINTURY, etc) on guitar. TEXAS MURDER CREW offers up some very groovy brutal DM similar to bands from Texas from the early 2000s. It’s a decent debut EP but overall its very average and doesn’t hold my attention, but I’ll definitely check out future releases as this band may deliver some goodness in the near future. 6 tracks, 1 intro, 1 is killer and 3 are OK.
ffo: DEVOURMENT, SINTURY, VOMIT FORTH, PROPHECY(TX), DEVOUR THE UNBORN