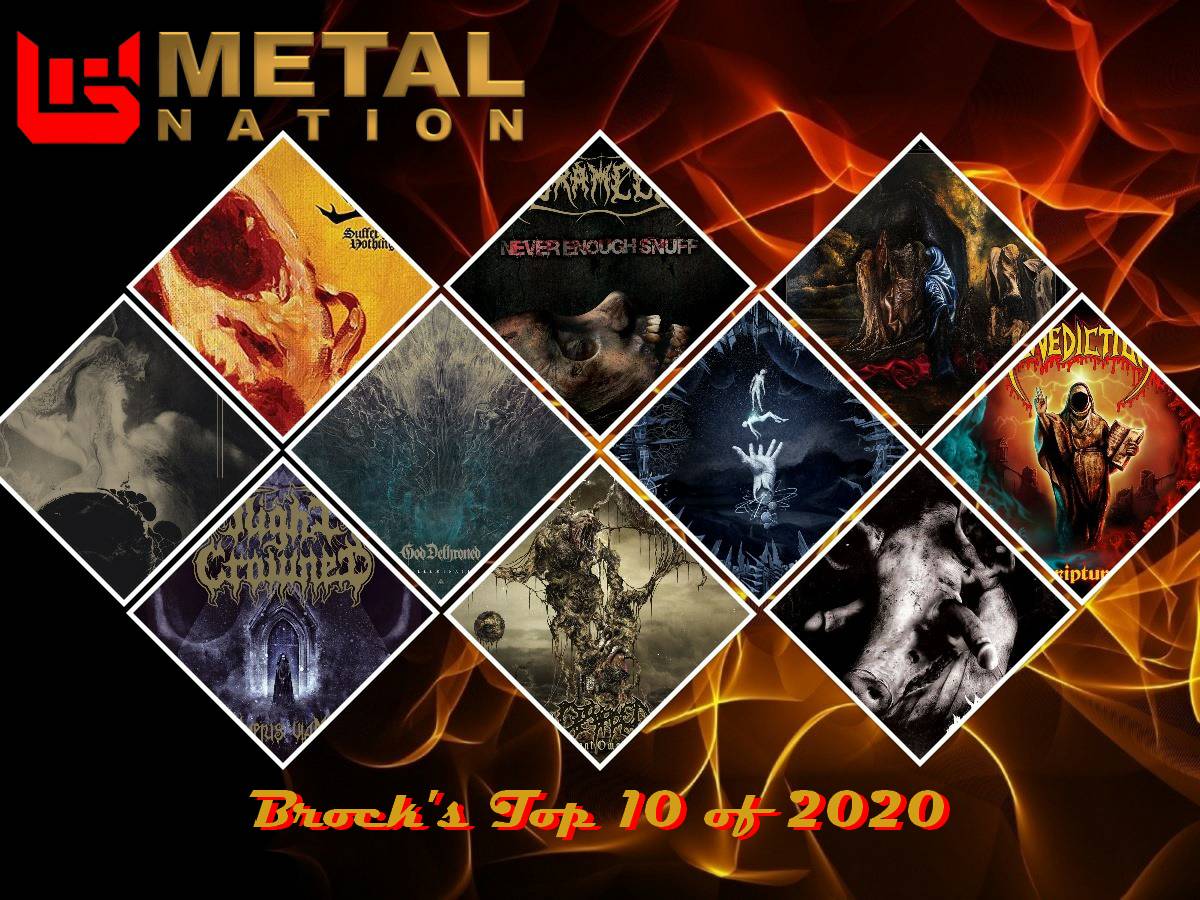 Another year has gone by too quickly is what I’d normally say, but 2020 is (for me personally) the worst year ever. Even if you take away the deaths in the family and bad luck, not since I was 15-years-old have I not seen at least one metal concert in a years time. 2020 has put the zero on my score board for shows this year. Other than missing Maryland Deathfest, there are a number of good concerts I knew about and ones that didn’t even get booked for this year, which still leaves a bad taste in my mouth. One positive note is that with no touring, a lot of bands have been writing new material, so 2021 is going to be insane with new releases. Like usual, metal music always picks my spirit up when I’m down, and this year, even with its garbage, was another strong year for metal! Some absolutely amazing releases came! It was seriously hard to boil it down to 10 because this could easily be a top 20 or 30 list, but after agonizing my brain all month here it is. brock 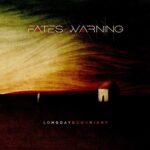 Fates Warning have been one of the pioneers in the progressive metal genre for nearly four decades and delivered greatness till 2004. The next few albums were kind of below average in my book. Long Day Good Night, their 13th album, is a great come back! This album has vibes of the Parallels (1991) and Inside Out (1994) albums. Finally Fates Warning brought more aggression to their songs. This is not a concept record trying to create a certain atmosphere, it’s just back to writing great song after great song. The more I listen to this album, the more I enjoy it and it could possibly work its way up to being one of my favorite from them. brock brock brock 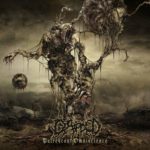 In the past decade the genre of brutal death metal has become kind of stale. The genre is becoming overflooded and barely any newcomers really bring anything of worth to the table. That has changed! Holy f^*# this is ultra brutal! Featuring members from other establish brutal death metal bands from Australia and Russia, Dripped brings the nastiest slab of brutality I’ve ever heard! Blasting speed, punishing brutality and precise grooves pummel you in the face throughout this 15+ minute long EP! This is that blast of fresh air that the genre needed. Brutal Death Metal genre take notice, because Putrescent Omniscience just set the bar for how it should be done! 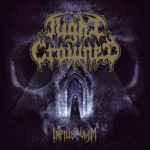 Night Crowned are a new black metal band from Gothenburg Sweden featuring members from ex-melodic death metal bands including Dark Funeral and Cipher System. This is absolute killer melodic Black Metal! Impius Viam is top notch production of viciously fast with catchy melodies of riffs that will keep you head-banging throughout this record. This is a culmination of everything melodic black metal should be and Night Crowned has brought back what has been missing that bands like Dissection, Dimmu Borgir, and Emperor have left behind. Impius Viam is a tremendous album and proves this band is right there at the top of the genre. 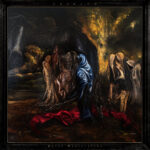 Poland’s Azarath has been creating fast and ferocious blackened death metal for more than two decades and are an exemplification of when it’s done properly. I thought they delivered greatness with their third album, Diabolic Impious Evil (2006), but the fifth album, Blasphemers’ Maledictions (2011) demolished that idea. Then six years later they destroyed that with In Extremis, which probably in the top three of the best records in the genre. Now with Saint Desecration, Azarath continues its savage balance of blitzkrieg riffs and intense atmosphere. Saint Desecration comes right in as their second best album! Not many veteran bands can say that within a decades’ time have released (probably) their top three best albums of their career a decade after their creation. A must listen for any fan of extreme metal! brock brock brock 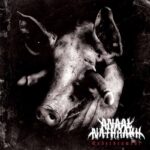 England’s Anaal Nathrakh is like a fine caliginous wine, gets better with age. They have been reaching new heights in the past few years and you’d think we’re due for a letdown, but oh no, Endarkenment is fantastic! Another album that is consistently visceral and aggressive but sinks those musical hooks into you which will have you humming the choruses for days after. I do feel the song writing on Endarkenment is a bit more accessible to the average metal, but still doesn’t take away from how great this album is. Anaal Nathrakh continues its journey of musical extremity and is still a juggernaut to be reckoned with. And that artwork…

6. Morta Skuld – Suffer For Nothing (Peaceville) 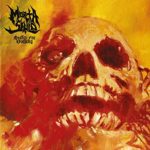 Their first three releases are just classics in the Death Metal genre. Now, the Wisconsin contingent’s sixth studio album, Suffer For Nothing is a perfect mix of the band’s entire career packaged into one great album. Morta Skuld is firing on all cylinders here. To be able to craft an album with your signature sound while making it brutal, catchy, and full of memorable riffs is a true sign this veteran band is back with a vengeance! I absolutely love it when an old school band can deliver such greatness decades after their first album. Morta Skuld has unleashed one of its best albums and shows what a prime example of Death Metal is! 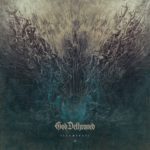 Three years later and after their war trilogy, God Dethroned has reverted back to the dark side with their Satanism/Anti-Christianity theme! Illuminati is a well constructed opus that the band’s song writing has brought back that incredible sinister atmosphere and recognizable God Dethroned style of riffs that created those memorable songs similar to earlier in their career. This album is the perfect mix of blasting, intense-headbanging death metal and melodic riffs that will haunt your brain for days after. God Dethroned is back with this album. Even fans that have turned from the band should take a moment to rediscover these Netherland stalwarts as they’re one of the most impressive and underrated acts in the genre.

4. Ulcerate – Stare Into Death and Be Still (Debemur Morti) 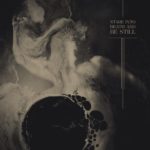 With their albums, Of Fracture and Failure and Vermis being my favorites while the rest not really doing that much for me, I wondered what this new album from New Zealand’s Ulcerate would bring. WOW! I’m blown away. This album is amazing! This is a culmination of everything they have done with equal parts technical and emotionally heavy, has pushed this to greater heights than ever before. The focus of aggression mixed with the dissonant sounds of melody and a great production just creates an absolutely well written masterpiece! Stare into Death and Be Still has become my favorite album from Ulcerate. This is an absolute must listen for every fan of death metal! 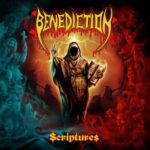 As I get older there are two things I appreciate more when listening to metal. #1 enjoying more of the old school classics in every genre and #2 when a veteran band drops a new album that is incredible! That is what we have right here, 12 years later we finally get new music from the Birmingham behemoths and it’s awesome! Dave Ingram is back on vocals which helps bring back that nostalgia factor. The song writing shows that band has fresh energy back to create a great Death Metal album. Scriptures is this the best thing they’ve done since 93’s Transcend the Rubicon and 95’s The Dreams You Dread! This album is a testament that Benediction back at the top of the genre! 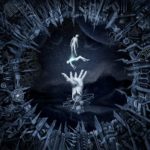 Finland’s …and Oceans debuted as a symphonic/melodic black metal band in 1998. Their sophomore album The Symmetry of I, the Circle of O (1999) was their best in my opinion. On their fourth album, Cypher they shifted towards a very heavy industrial/techno-ish sound and then disbanded a two years later. Now 18 years hence, …and Oceans  deliver its fifth studio album, Cosmic World Mother.  I was expecting a continuation of the Cypher album but WOW! …and Oceans has returned to its old school glory! This album is amazing! A fantastic display of symphonic/melodic black metal! This album is a bit more straightforward black metal, the keys/synth are still there but not as heavily focused. I truly love when a band can produce their best or a career topping album years after their debut! …and Oceans has just proven why the black metal genre is not done by a long shot! 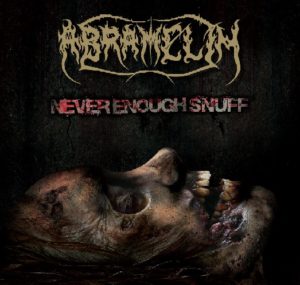 Melbourne’s Abramelin is one of those band that never got enough respect and should’ve been a lot bigger in my opinion. I got their 2000 sophomore album, Deadspeak about a year after it came out and loved it, then back tracked to their earlier material and was blown away! Sadly, the band went on a two decade hiatus after Deadspeak. Two decades after that incredible record and the band is back, with four original members along with Psycroptic’s David Haley on drums. With Never Enough Stuff, Abramelin drop a fucking nuclear bomb!!! I’m completely blown away again! Never Enough Snuff is an incredible, almost a flawless album and hands down my album of the year! Plain and simple, THIS IS DEATH METAL. Everything you’d want in death metal is here. The more I listen to it, the more I love it! Probably the best death metal album from start to finish I’ve heard in the past decade. Hopefully it won’t take 20 more years for the follow-up.