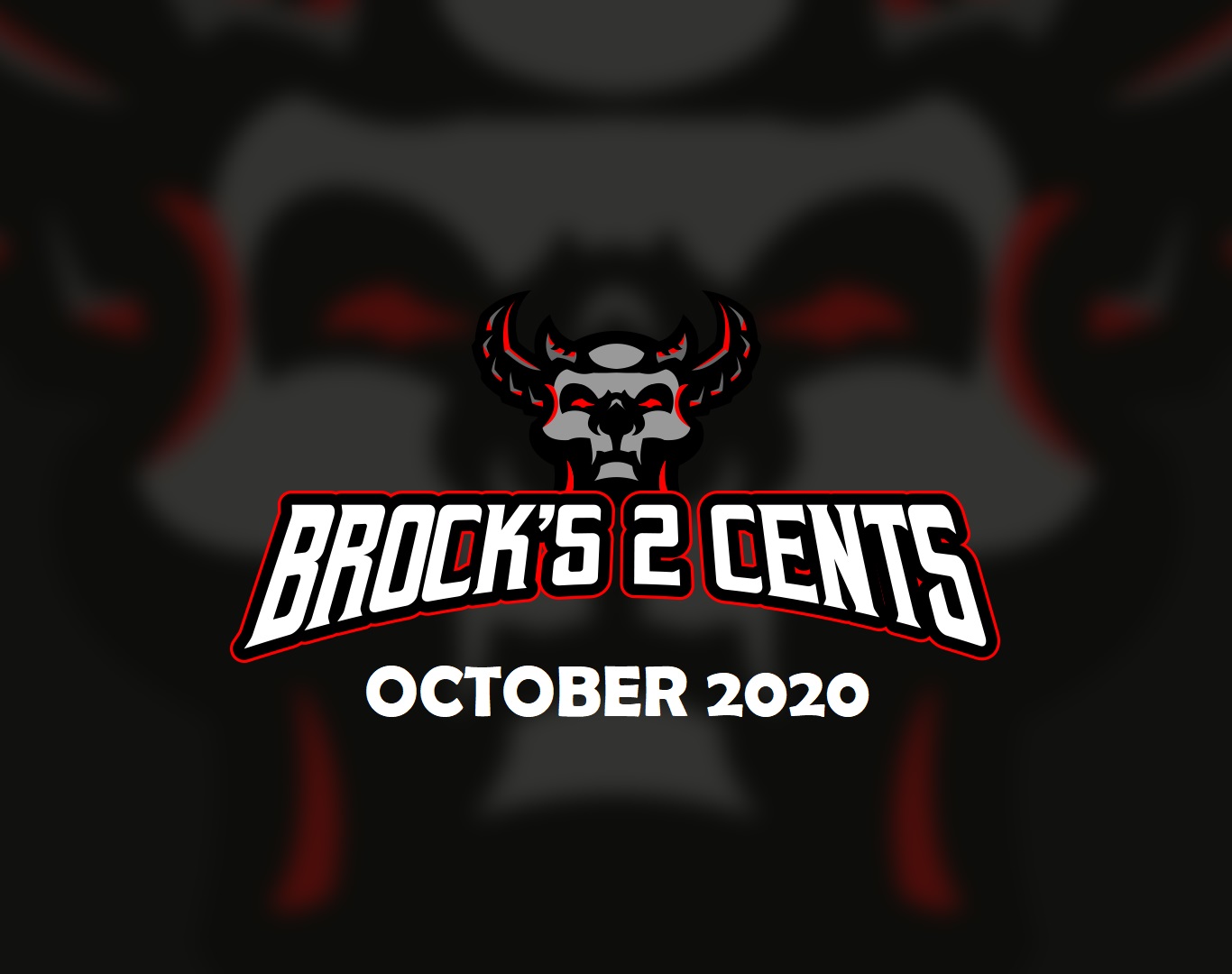 October is almost done and this year is flying by… This Covid-19 crap is still here, *UGH*… Well, one thing is next year is gonna be crazy with new releases because all the bands are writing and practicing since there’s no shows/tours. Here is my reviews of recently released albums that I think you should know about. Forget about these in depth reviews, I’m bringing you quick reviews on multiple releases to help you guide your way through the METAL world today!
BASICALLY THIS IS JUST MY OPINION, LIKE IT OR NOT…
Ratings: [0(sucks) to 5(awesome)]
{Format: Band – album title = rating |label |style of metal. review} 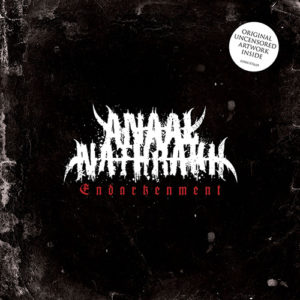 ANAAL NATHRAKH – Endarkenment = 4/5 |Metal Blade |Industrial Black Metal
I love this band! The aggressive BM approach with touches of industrial vibes mixed with the power metal-ish riff influences! Ever since I first heard them in 2006, Eschaton album, with the song “Between Shit and Piss We are Born” it blew my mind! The last few albums besides The Whole of the Law were incredible with A New Kind of Horror being a milestone high for the band in my opinion so I wasn’t sure what to expect. Endarkenment is f’n great! This album might be there best as I think its the most accessible to the average metal listener. Maybe some die-hard fans might have another opinion as I don’t think this album sacrifices anything and continues along the lines of the last 4 or 5 albums. This will be in my top albums of 2020! 10 tracks, 5 are killer and 4 are good!
ffo: ZYKLON, THE BERZERKER, AN AXIS OF PERDITION, THE AMENTA 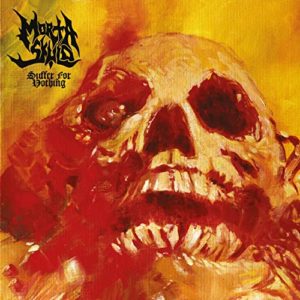 MORTA SKULD – Suffer For Nothing = 4.25/5 |Peaceville |Death Metal
Always liked this band from when I discovered them in ’96 with the For All Eternity album. Their first three releases are just classics in the DM genre. When Surface came out the band shifted to a more straight forward modern DM sound. Then the 20 year hiatus, they returned with Wounds Deeper Than Time which continue their sound similar to Surface and now, their 6th album, Suffer For Nothing is in the same direction. This time around the band is firing on all cylinders and created a slab of well written, head banging groove brutality! MORTA SKULD has unleashed one of their best albums! This is in my top albums of 2020! DM FANS GET THIS ALBUM!!! 10 tracks, 5 are killer and 3 are good.
ffo: RESURRECTION, BAPHOMET, GUTTED (USA), BRUTALITY, [early]GORGUTS 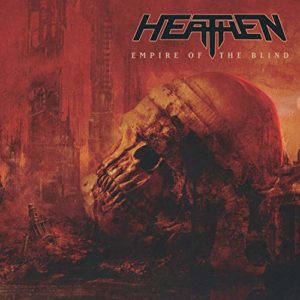 HEATHEN – Empire of the Blind = 2.5/5 |Nuclear Blast |Modern Thrash Metal
HEATHEN is a good middle of the pack band in the genre. Their earlier albums Breaking the Silence and Victims of Deception are classic speed/tech thrash and when they reformed with their 3rd album The Evolution of Chaos they progressed to a bit more modern sound with that old school thrash. Now a decade later their 4th album Empire of the Blind is here and the sound has shifted to a total modern thrash vibe. Overall it’s too modern for my taste. Maybe its due to three new members in the band? The album is OK but I wanted more of old school vibes to be through out the album. I’ll still jam to this album but probably not as much as their earlier albums. 12 tracks, 3 instrumentals, 3 are good and 4 are OK.
ffo: ANNIHILATOR, [newer] EXHORDER, [newer] TESTAMENT 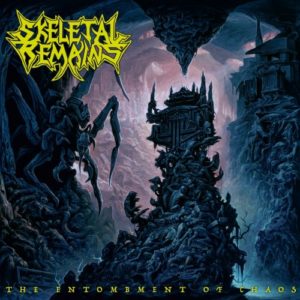 SKELETAL REMAINS – The Entombment of Chaos = 3.25/5 |Century Media |Death Metal
I checked this band out with their 2nd album; was not impressed and haven’t listened since. The new album The Entombment of Chaos has been getting a lot of good press so I decided to re-check out the band to see what the hype was about. Their 1st two albums are run of the mill, nothing special OSDM, but their third album Devouring Mortality the band is coming into their own sound by mixing their brand of OSDM and adding a personal modern touch. The Entombment of Chaos is the best yet, pushing their sound more into modern DM and less OSDM. I’ve said it many times I like these OSDM revival bands – I want to hear “their personal touch/their own vibe” to the music adding something new. I can listen to OSDM all day with the hundreds of bands that put albums out back in the day. So I’m very glad this band is developing their own sound! This is a must to check out for OSDM and DM fans! 11 tracks, 1 cover, 2 instrumentals, 4 are killer and 4 are good!
ffo: PESTILENCE, DEATH, OBITUARY, MORBID ANGEL, GOD DETHRONED 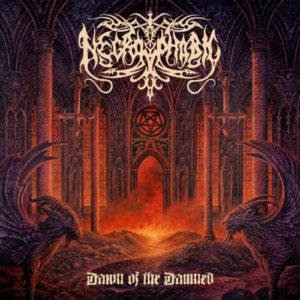 NECROPHOBIC – Dawn of the Damned = 3.25/5 |Century Media |Death/Black Metal
I’ve been an average fan of NECROPHOBIC for a long time and their last album Mark of the Necrogram was the best thing they’ve put out since their first few albums. So the bar was set high for this their 9th album Dawn of the Damned. This new album is a bit more focus on melodic song writing than aggressive blasting of the last one. This is really good and a nice follow up but not better than the last album. If you like the first few albums you’ll like this one! Definitely worth checking out. A must for fans! 10 tracks, 3 are killer and 4 are good.
ffo: DISSECTION, UNANIMATED, SACRAMENTUM, NAGLFAR, EUCHARIST 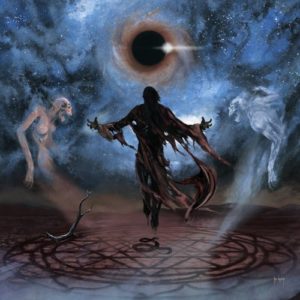 UADA – Djinn = 3.25/5 |Eisenwald |Melodic Black Metal
A little shock as I hit play on this new album. There is a strong prog-rock vibe going on with this album. I’m all for experimenting but is prog-rock the direction to go?!? Well, they did a great job, adding in a touch here and there but not going overboard/over saturating their sound. Their 2nd album Cult of a Dying Sun is still my favorite but Djinn is better than their debut. After a bunch of spins I do dig this new direction as they push BM forward. I also feel this album is very accessible to the average metal listener and will probably pull in a bunch of new fans. Fans of melodic BM definitely need to check this out! 6 tracks, 3 are killer and 3 are good!
ffo: MGLA, DAWN, [newer] ENSLAVED, GAEREA, BATUSHKA, VINTERLAND 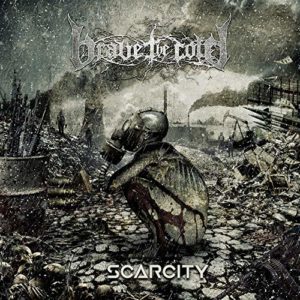 BRAVE THE COLD – Scarcity = 2.5/5 |Mission Two Entertainment |Grindcore/Death Metal
A new band featuring Mitch Harris (NAPALM DEATH) and drummer extraordinaire Dirk Verbeuren (MEGADETH, ABORTED, DEVIN TOWNSEND) so I was all in for this!!! A bit surprised when I hit play, not what I expected. Imagine PRONG and VOIVOD creating NAPALM DEATH songs and this is what you get. It has that experimental vibe from the newest NAPALM DEATH album going on here too. When you get to the second half of the album it gets back to normal grind that you’d expect from these two. Overall, not bad, something a bit different but not sure how much I’ll actually jam to this; it might be a “grows on you” type of album. If you like experimental grind then this is right up your alley! 11 tracks, 3 are good and 5 are OK.
ffo: PRONG, VOIVOD, NAPALM DEATH, PIG DESTROYER 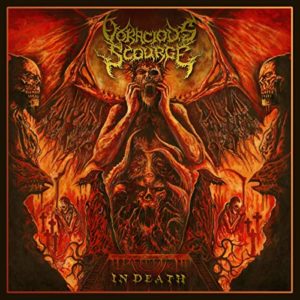 VORACIOUS SCOURGE – In Death = 3/5 |Massacre |Death Metal
Jason McIntyre has pieced together a supergroup of musicians featuring members of SINISTER, ATHEIST, CYNIC, SUFFOCATION, PESTILENCE, etc… to bring his vision to the surface. The debut EP, Our Demise was OK, even though it got a lot of good press. In Death follows along the same vibe as the EP. A very good display of DM from the late ’90s to early ’00s. This is better than the EP and is moving in the right direction! Definitely worth checking out for DM fans! 10 tracks, 1 cover, 3 are killer and 3 are good.
ffo: SUTURE, SINISTER, PYREXIA, SUFFOCATION, ABORTED 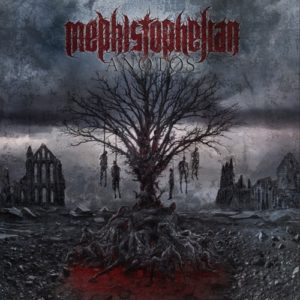 MEPHISTOPHELIAN – Anotos = 3.5/5 |Independent |Death Metal
A new band from Slovenia featuring Romain Goulon (NECROPHAGIST, BENIGHTED, etc) bringing some fast paced blasting DM! There are few grooves mixed in through out with just intense blasting as this release melts your eardrums! I’m really surprised this band is not signed yet. Better stretch your neck out before listening to this! DM fans this is a band that you need to check out! 10 tracks, 4 are killer and 4 are good!
ffo: GORGASM, [early] ORIGIN, DISAVOWED, NEAR DEATH CONDITION

JUST BEFORE DAWN – An Army at Dawn = 2/5 |Raw Skullz |Death Metal
The BOLT THROWER worship juggernaut is back with a new full length. After putting out a few EPs that were on the slower side of the DM vibes I was hoping this album would pick up a the pace a bit/add more aggression, I wasn’t expecting any blasting at 300bpm or anything like that. An Army at Dawn is decent but just too mid paced and maybe a little too simplistic with the song writing. Die hard BOLT THROWER fans and OSDM fans will enjoy this. 10 tracks, 2 are killer and 4 are OK.
ffo: BOLT THROWER, HAIL OF BULLETS, ASPHYX, BLOOD MORTIZED

ESKAPISM – Reminiscence = 2/5 |Archaic |Atmospheric Black Metal
A good Atmospheric BM band from Ukraine with their new EP Reminiscence. They already have two good albums out, a 2 song EP and they continue their sound on this. When bands release EP, its tricky sometimes, its either fulfilling, lacking or just a taste of what’s to come. With Reminiscence I’m disappointed because it’s lacking. Only 2 new songs, an instrumental and a cover song is just not enough for me, but I’ll be looking forward to a new full length. 4 tracks, 1 cover, 1 killer, 1 ok.
ffo: KRODA, DEPRESY, REMETE, LUSTRE, VELDES 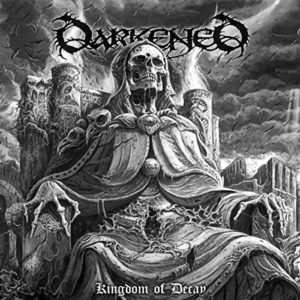 DARKENED – Kingdom of Decay = 2/5 |Edged Circle |Death Metal
A new band featuring members from BOLT THROWER, MEMORIAM, GRAVE, A CANOROUS QUINTET playing mid paced OSDM with a modern touch. A sound very similar to European bands from the ’90s, DARKENED blend that OSDM vibe from England with some melodic parts of Swedish bands. Overall, its OK but nothing really special either. This could possibly be a ‘grows on you’ album. OSDM fans need to check this out! 11 tracks, 2 instrumentals, 2 are good and 4 are OK.
ffo: MEMORIUM, BOLT THROWER, [newer] UNLEASHED, HAIL OF BULLETS 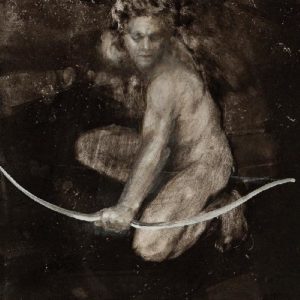 SERPENT COLUMN – Kathodos = 2.5/5 |Mystiskaos |Avant-Garde Black Metal/Mathcore
I originally checked this band out because it was described to me as Mathcore plays BM aka MASTODON plays BM, so I had to check this out. The description was sorta right with the first 2 release but the band is progressing more into their own brand of BM now. This is a very different style of BM band here and I dig it. Their second album Mirror in Darkness is my fav and their last release Endless Detainment EP was very good. Kathodos is good but not their best, if you check out this band; don’t start with this release. If you want to hear something different in BM, this is the band to check out! 11 tracks, 3 are killer and 3 are OK.
ffo: KRALLICE, DEATHSPELL OMEGA, ABIGOR, UADA, DODECAHEDRON 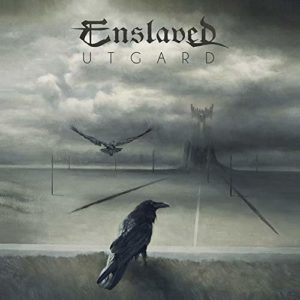 ENSLAVED – Utgard = 1/5 |Nuclear Blast |Progressive Black/Viking Metal
I love the old BM albums and the progressive BM albums up to Below the Lights, after that not a real big fan. I still check out every album but it’s usually the same since the Isa album; 1 or 2 songs are killer and the rest is blah. The last album E I didn’t like at all. Definitely continuing their strong prog rock influence. Probably not your best reference for the new album but I checked it hoping for something better but it’s at least better than the last album. 9 tracks, 1 is good and 3 are OK.
ffo: BORKNAGAR, IHSAHN, PRIMORDIAL, HELHEIM, OPETH, MANEGARM