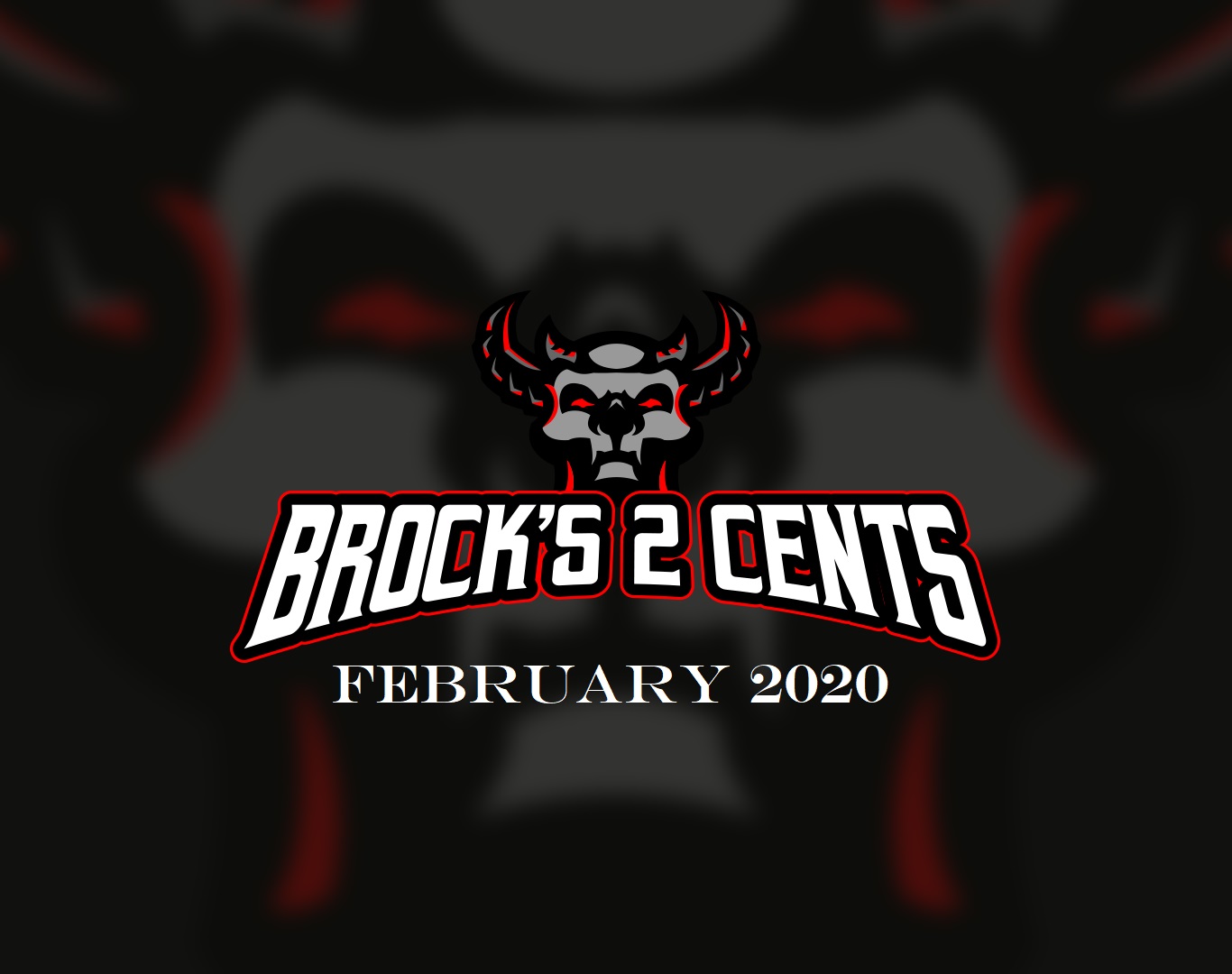 2020 is off to a blast with a bunch of new albums and this is my review of recently released albums that I think you should know about. Forget about these in depth reviews, I’m bringing you quick reviews on multiple releases to help you guide your way through the METAL world today!
BASICALLY THIS IS JUST MY OPINION, LIKE IT OR NOT…
Rating: [0 (sucks) to 5 (awesome)]
{Format: Band – album title = rating |label |genre of metal. review} 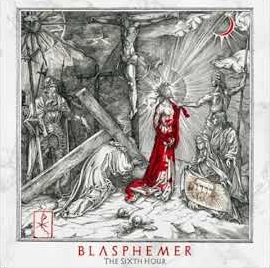 BLASPHEMER – The Sixth Hour = 4/5 |Candlelight |Technical Brutal Death Metal
One of my favorite bands to come out in the late 2000 era has delivered their 3rd album on a major metal label. With 2 very strong albums and a killer EP under their belt BLASPHEMER has taken another step forward and brought us a devastating album with a bit more modern sounding DM than compared to previous Brutal DM material. But that hasn’t compromised the intensity, this new album attacks your ear buds with a fury of razor sharp, fine tuned onslaught of DM! The Sixth Hour is relentless from start to finish! This is the first album of the year to be nominated for my top albums of the year list! 12 tracks, 5 are killer and 4 are good!
ffo: IMMOLATION, DEFEATED SANITY, MONSTROSITY, [mid] BEHEMOTH 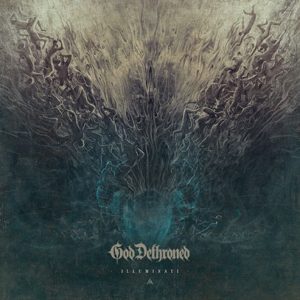 GOD DETHRONED – Illuminati = 4/5 |Metal Blade |Death Metal
3 years later and after the war trilogy, we get a new album! GOD DETHRONED has reverted back to the Satanism/Anti-Christianity theme! Also GOD DETHRONED is one of my all time favorite bands so I was definitely hyped for this new album. Illuminati is a killer album that fits right along with their discography, reminding me of their earlier albums. The song writing on this album has incredible melodic riffs that create those remember-able songs that sticks in your brain and makes you think of them days later. Tracks like “Broken Halo” and “Blood Moon Eclipse” blast you with that intense headbanging Death Metal while tracks “Books of Lies” and “Gabriel” hit you with those melodic riffs that stick in your head for days! This is a must for fans and will be in my top albums of the year! 9 tracks, 4 are killer and 3 are good!
ffo: MORBID ANGEL, HYPOCRISY, AMON AMARTH, NECROPHOBIC, DISSECTION 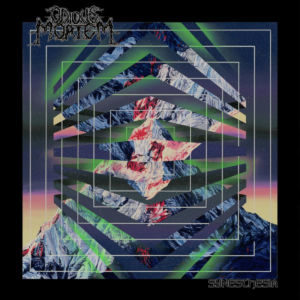 ODIOUS MORTEM – Synesthesia = 3.25/5 |Willowtip |Technical Brutal Death Metal
13 years later, we finally get the third release, with original members from their last release Cryptic Implosion, and its damn good! This new album is definitely more technical than brutal, as there’s a strong DEATH vibe here. Dan Eggers shows of his tech shred abilities on this album. Synesthesia is very good but not that remember-able, it doesn’t make me want to keep listening to it over and over, even with that said this might be their best album yet! Fans and Tech DM fans will enjoy this album! 10 tracks, 4 are killer and 4 are good!
ffo: DECRIPIT BIRTH, [later] DEATH, GORGASM, SEVERED SAVIOR, SPAWN OF POSSESSION 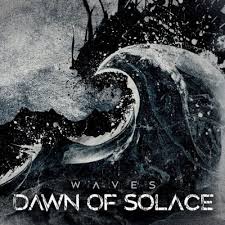 DAWN OF SOLACE – Waves = 3/5 |Noble Demon |Melodic Doom Metal
Tuomas Saukkonen is a genius when it comes to melodic metal in any sub-genre. Pumping out multiple melodic albums under a hand full of band names, Tuomas Saukkonen has proven he’s one of the best. In 2014 he disbanded all his band to focus only on WOLFHEART but it seems his creativity couldn’t be locked down as 14 years after the debut album DAWN OF SOLACE has been resurrected! Now with an addition of a clean vocalist the sophomore album is a solid emotionally doomy experience. This album is a bit better than the debut. 8 tracks, 3 are killer and 3 are good.
ffo: [mid] KATATONIA, INSOMNIUM, BEFORE THE DAWN, DAYLIGHT DIES 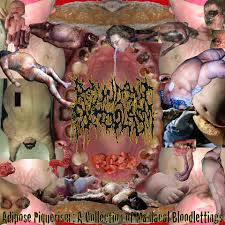 REDUNDANT PROTOPLASM – Adipose Piquerism: A Collection of Maniacal Bloodlettings = 3/5 |HPGD Productions |Goregrind
A new goregrind band out of VA, unleashing their debut album and I love it, straight to the point, no nonsense, this is goregrind! It’s a really solid debut and it’ll get ya dancing around and acting a fool in the pit! Best description of the band is as stated on their label’s bandcamp page “puking out old school, Punk infused, Goregrinding chaos!” This is a must for all goregrind fans to check out!!! 13 tracks, a Siege Cover, 5 are killer and 4 are good!
ffo: GENERAL SURGERY, LAST DAYS OF HUMANITY, REGURGITATE, ROMPEPROP 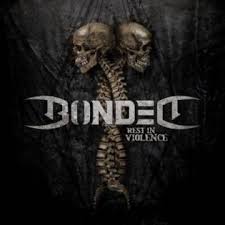 BONDED – Rest In Violence = 2.5/5 |Century Media |Thrash Metal
The debut album from this German band featuring ex-members of SODOM & SUICIDAL ANGELS. Rest in Violence is a solid mid-paced straight forward groove thrash album! The production and sound is top-notch. Only complaint is I wish the album was a little bit more aggressive and faster! Definitely a modern thrash sounding album but worth checking out if your into thrash. 12 tracks, 4 are killer and 4 are good.
ffo: TESTAMENT, KREATOR, SUSPERIA, EXODUS, BYZANTINE 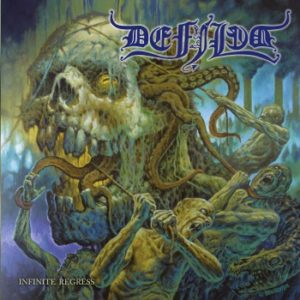 DEFILED – Infinite Regress = 2/5 |Season of Mist|Death Metal
DEFILED from Japan is one of those bands that has gone under the radar for how great they are. Their first 3 albums are very good DM that can stand up next to the leaders in the genre. Their 5th album Towards Inevitable Ruin was a setback with a horrible production which I was amazed Season of Mist even put it out, but this new album has turned the ship back in the right direction! Some of these new songs have a touch of thrash to them but continuing that feel of DM from the late 90s. Infinite Regress is good, way better than the last album but not as great as their earlier albums. 14 tracks, 4 are killer and 4 are good!
ffo: PESTILENCE, MONSTROSITY, ATHEIST, POSSESSED 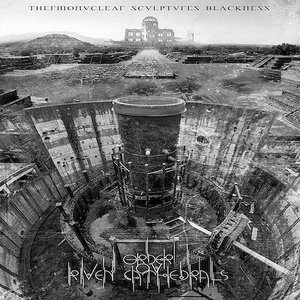 ORDER OV RIVEN CATHEDRALS – Thermonuclear Sculptures Blackness = 3/5 |Independent |Technical Death Metal
I’ve said it before many times, any death metal band coming out of the Netherlands or Italy, you need to take a moment and check it out, because 75% of time, its gonna be killer! I discovered this band last year with their 2nd album and was blown away! Also their first album, which came out in 2017, is good too! With their 3rd album released last year in 2019, I’m baffled how this band is not signed yet! A complete unknown gem in the Tech DM genre is this unbelievable band! This new album continues their brand of tech death but has included a touch haunting choir arrangements, some keyboards and a little bit of industrial. This new album is good but not better than their last, Gobeklie Tepe, but not far behind! 10 tracks, 3 are killer and 4 are good!
ffo: HOUR OF PENANCE, HIDEOUS DIVINITY,  [early] FLESHGOD APOCALYPSE, NILE 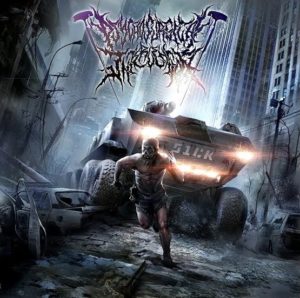 PSYCHOSURGICAL INTERVENTION – Prologue = 2/5 |Independent |Brutal Death Metal
The new EP from this Russian Death Machine brings a pounding, punishing display of brutal DM with some grooves! This sounds like a mix of Brutal DM, with a touch of slam and a touch of CATTLE DECAPITATION. A very solid EP, definitely keeps your interested with its pounding fury, not following the trend of this cookie cutter Brutal DM that’s going around nowadays. 5 tracks, 2 are killer and 2 are good.
ffo: WAKING THE CADAVER, OBITUARY, CATTLE DECAPITATION, KATALEPSY 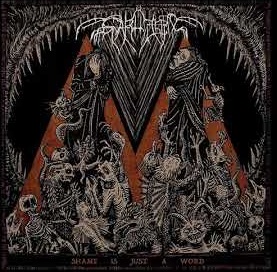 SVARTTJERN – Shame is Just a Word = 1/5 |Soulseller |Black Metal
SVARTTJERN’s first 3 albums were fast paced, blast-beating chaotic BM with a good production, then their 4th album Dodskrik took a turn towards simplistic BM, similar to what SATYRICON has done. This new album kinda of continues that trend but has a thrashier vibe to the songs. Basically this is nothing like SVARTTJERN of old and if you like Thrashy BM then check this out but I’d rather listen to the first 3 albums. 8 tracks, 1 cover song, 1 good song and 4 are ok.
ffo: [later] SATYRICON, 1349, DARKTHRONE, WATAIN, [later] IMMORTAL