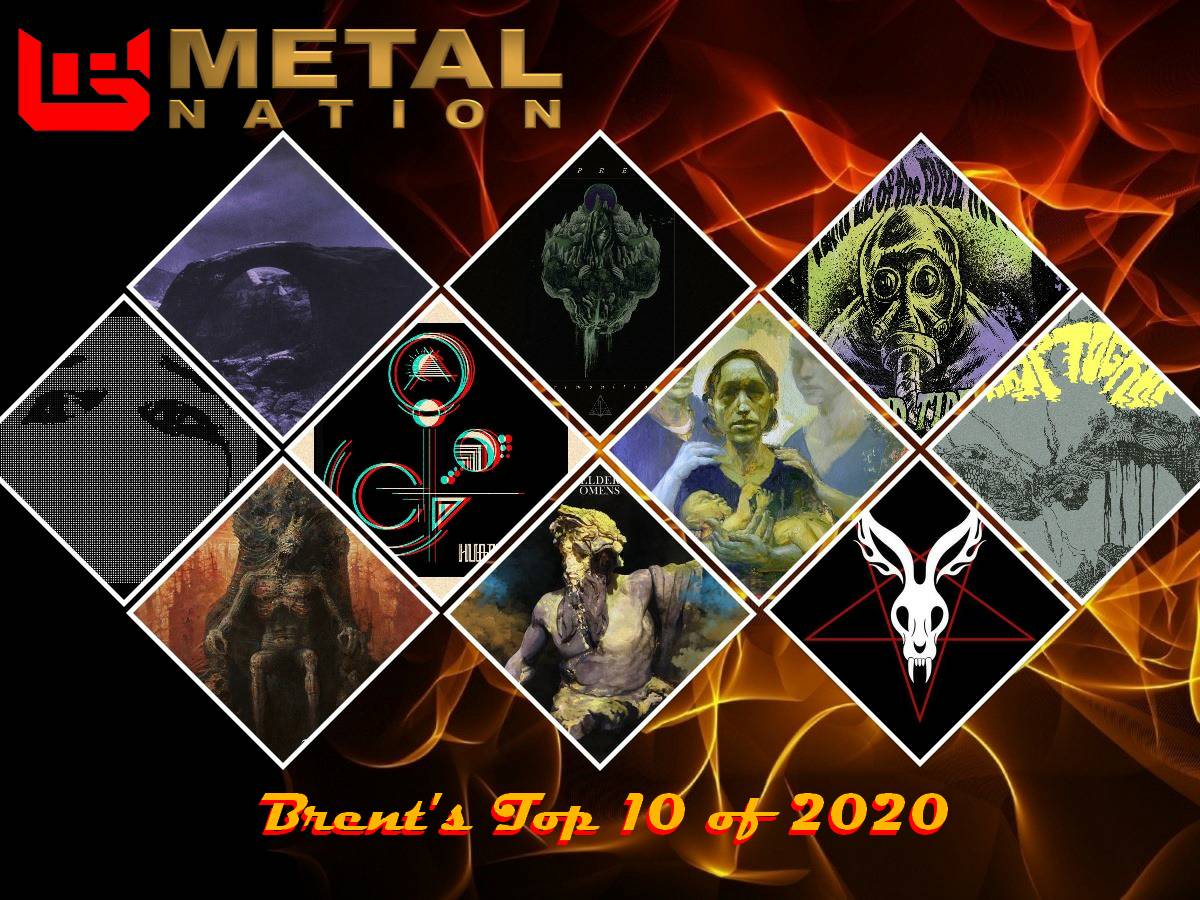 It all begins and ends here, doesn’t it? Where would we without our metal gravity blankets after a year like this? While it certainly wasn’t the way I wanted to come about more free time, the last nine months have given me the gift of wonder and exploration through all kinds of music. And while I have found many mutations of chords and choruses, I am always most at home when the eyes start to melt, the ears begin to ring, and the guttural scream of metal comes through the air. May you all be healthy and safe until the next time we roll in the pit. brent brent brent

Each of these albums were on my long short-list, so I would highly recommend checking them out. Plenty of variety and quite likely something you’ve never heard! brent brent brent 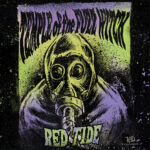 There’s no way you would be able to convince me Temple of the Fuzz Witch isn’t from London, or if not there, from Western Europe. The doom scene in that area of the globe is on fire right now, and Red Tide sounds like it would fit directly into a best-of catalog. But instead, they are representing the Detroit, Michigan scene. Who knew? All of the elements of an excellent doom band are in place; fuzz, drudge, epic song lengths, monstrous groove sections, etc. You name it, you got it. Relative newcomers to a larger scene, TotFW shows it can contend with anyone in their weight class from North America. brent brent brent 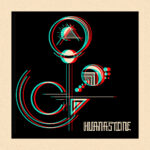 Metal has its roots in the blues, there’s no doubt. On occasion, we hear a band that encapsulates the early feel that Led Zeppelin and Black Sabbath brought. While I would never blaspheme and compare a band to either of the godfathers of metal, Huanastone certainly takes its cues from the masters. Third Stone From the Sun has a Graveyard side to it while also mixing in some excellent vocals, somewhat in the style of All Them Witches. Not the heaviest entry on the list, but one that stacks up well against the rest. 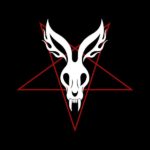 Over twenty years have passed since we have heard from the absolute wreckless musical abandon that is Mr. Bungle. The Raging Wrath of the Easter Bunny Demo goes after it right out of the gates, thrashing and punking its way through 11 songs at breakneck speed. Dave Lombardo and Scott Ian both clearly contributed to the chaos on the album that was already present with Mike Patton. I’ve seen a blog post or two that mentions this is what Mr. Bungle sounded like in the beginning. Way heavier than I remember ever hearing, the 2020 release shows how truly talented the men of Bungle really are. 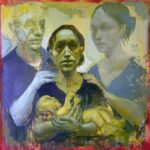 Doom metal wasn’t really on my radar about five years ago. It’s now arguably my favorite genre within the metal sphere. Pushing their way to the forefront of the American scene, Arkansas’ Pallbearer returns after producing one of the better records of the decade with Heartless. Forgotten Days takes us right back into that album, while adding more layers to an already dense sound. It feels like it would be beyond difficult to add variance to doom. If there is an example of how to do just that, it would be Pallbearer. 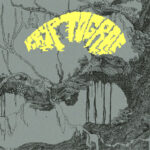 Hard-rock out of Norway. Who’d of thunk it? Adding another Scandinavian group to the ever-growing list of excellent bands from the area isn’t noteworthy. What is, however, is that Kryptograf’s self-titled album is their debut effort. In spite of that, their sound is mature and deep. Combining the sounds of 60’s hard rock with the vintage sound of the region (Witchcraft-esque), Fans of Weedpecker and Uncle Acid and the Deadbeats will feel right at home. Kryptograf added their pin to the map of excellent heavy music from northern Europe.

The old guard will easily remember “Stars”, an MTV 120 Minutes-style rock song that somehow made it to mainstream radio, and that’s saying something in the post-grunge days. To be fair, I’m not sure why I picked Inlet up, but my penchant for nostalgia put it in my rotation and it hasn’t left since. Hum has been around since at least 1993, with their relative success coming in 1996. A follow-up album in ‘98 fell victim to god-awful trends in music and Hum faded away. Inlet captures the heavy rock sound of the mid-1990’s perfectly. It’s a sound that I must have really missed because I rolled this album for nearly a month straight. Inlet is an excellent record, regardless of the rock era you love. Easily a top-5 pick for me this year. 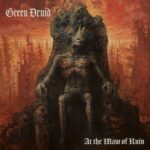 Back to the doom. Green Druid have released the soundtrack for this crap show of a year, and I mean that in the best way possible. Brooding and heavy as hell, At the Maw of Ruin is the second effort from the Denver-based band, showcasing their grip on the genre. The album expands their range with harmonies and pinpoint bass lines that sound like a distant war drum that is slowly moving toward you. Ominous and precise, Once the world re-opens, I see Green Druid rapidly growing in stature and reach. A quick side note, the final track is a cover of Portishead’s “Threads”. Any band that can make a Portishead song more moody and eerie gets my respect. 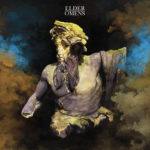 Not much is left to be said about Elder if you have been paying attention. A band that continues to evolve in such a masterful way is remarkable. They are so diverse that they have had to add members to be able to incorporate all of the layers and sounds that they mold into a unique and lucid sound. Omens is the latest effort from the band, originally from Massachusetts, but now headquartered in Germany. Nick DeSalvo has mentioned that the change in scene, especially this year, has opened his eyes and ears to what Elder could be. Regardless of what that sound is, Elder has become the modern prog rock standard. Omens serves as notice that their place on the throne is secure for albums to come, a serious contender for Album of the Year. 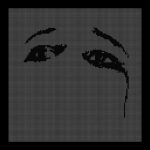 Sometimes bands can equally inspire and frustrate. One of those bands for me would certainly be Deftones. You would be hard pressed to find a band that can create unique, heavy music that can grab your full attention instantly. The same can be said for songs they have written that just don’t seem to fit the rest of the album. That was my hesitation listening to Ohms for the first time. And for the first time, a Deftones record put their signature sound and capacity in one divine recording. The ever-present percussive lead guitar and contrasting fluid bass lines, combined with pinpoint percussion and perfectly aligned vocals, give Ohms a chance to be Deftones signature achievement over three decades of musical experimentation and excellence. 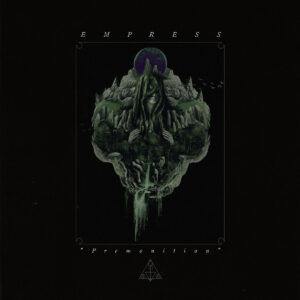 Of all the things I miss about the “regular” world, the piece of life I truly long for is a live show. It is one of the only places I feel like myself and can fully immerse in something that is just mine. When I can do that again, I will make a pilgrimage to Vancouver, British Columbia to see Empress. A power-trio that credits its beginnings to seeing Elder live, Empress follows 2018’s Reminiscence with a much more balanced attack, using heavily grooved bass with driving and meticulous riffs. The vocals either back the crushing march of the heavier passages, or soar ahead of the caravan with an ethereal presences. Peter Sacco mans the helm, providing direction through guitar and vocal harmonies, many of which make it difficult to pin a certain “sound” on each iteration. Bass duties are fulfilled by Brenden Gunn, who adeptly flows between doom, prog, and heavy handed rock. Chris Doyle completes the trio behind the kit. His weaving between jazz licks and bruising rhythms give Empress a canvas to present their collective talents. For an initial LP, Premonition is remarkable. The range of musicianship and musical styles represented makes it sound like they have been together for decades, not just a few years. Empress have produced a record that immediately put them in the discussion of excellent new metal bands. The quality and expertise on the album far surpassed any expectation I would have for a new band. So much so that I have selected Premonition for my album of the year. It is a journey well worth taking.