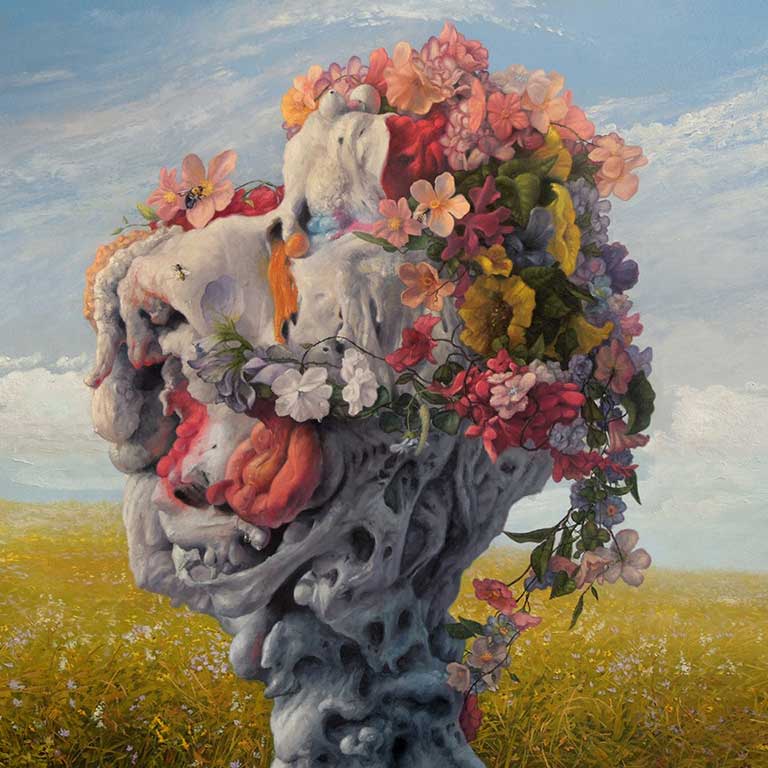 Frequently and loudly I have proclaimed and bemoaned the lack of imagination in modern metal and the disappearance of the perfect album. That which beckons the listener to run through the entire record without skipping a track, and joyful for the journey. Boston-based Wilderun is a band that has come as close as any I have seen over the last decade, to achieving just that. After a promising 2012 debut with Olden Tales & Deathly Trails they unleashed the decidedly brilliant Sleep at the Edge of the Earth. They followed this up with last year’s magnificent Veil of Imagination. While no one knows what lies ahead for Wilderun, Veil of Imagination is easily the group’s seminal work in what is already a stellar grouping of records. Unfortunately for the band, they self-released the album in November, a time when many outlets had already cultivated their various “year-end” lists. Even I had to add it last minute as an Honorable Mention to my own Top 10, which upon more intent listening over the last several months would have moved to the front of the class. Fortuitously, Century Media Records is re-issuing the album and those who might have missed out will get an opportunity to discover what may in fact be a near perfect album.

While the record label (and they do love their labels) hail Wilderun as a melodic death metal band and citing Opeth as a similar style, this distinction does the quartet a grave injustice. The band’s sound is rather indefinable. Even though I have referred to them as  neo-folk symphonic progressive metal, they have a diverse range of styles, including the aforementioned melodeath elements.

Wilderun took root as far back as 2008 with Even Anderson Berry (vocals, guitars, keyboards). It became a band in 2012 with the additions of Dan Müller (bass), Jon Teachey (drums), and  Wayne Ingram (guitars, keyboards, orchestrations). Lead guitarist Joe Gettler joined in 2016. With Veil of Imagination, the band has created an album of massive breadth, equally chaotic yet contained, full of expansive beauty and dark brutality. There is a wealth of diversity, yet there is amazing continuity as well.

The album, begins with “The Unimaginable Zero Summer,” a 14 ½ minute display of sonic grandiosity that spans the vast soundscape of all that is to follow and all that the album’s eight tracks and 66 minutes contain. From its spoken word vocal intro and its onslaught of blast beats and deathly growls, to its soaring atmospheric melodies and emotive clean vocals and choir, this is just a brilliant composition. Everything is here; wonderful lyrical content, fantastic musicality, and multiple dynamic shifts and nuances. The full stop at the 4:30 mark is genius. By the end of the song you may be on your knees, ala Wayne’s World declaring yourself unworthy of listening.

In comparison to the opener, “O Resolution!” and “Sleeping Ambassadors of the Sun” seem almost pedestrian, yet they are fantastic progressive tracks better than most things you’ll hear this year on any other record. The former feels almost like a film score in its scope, intensity, and vocal delivery. Berry is equally gifted in his cleans as well as his guttural vocals, and unlike most harsh singing, his growls do not feel abrasive. It comes across as if he’s giving voice to a misunderstood beast in some whimsical tale. The latter begins with more spoken word vocals over piano and orchestration that again recalls the shadowy feel of a movie.  Yet even in its ominous darkness, one feels safe and hopeful for a happy ending, like some metal rendering of a Disney film.

“Scentless Core (Budding)” serves as something of a palette cleanser at the end of the album’s first half. An instrumental piece that is full cinema art. It paves the way for “Far From Where Dreams Unfurl”. This track is a celebration of epic beauty, rich with lush orchestrations and emotive clean vocals from Berry.  This is arguably the album’s centerpiece in terms of accessibility to those unfamiliar with the band. This is my personal favorite among all the band’s songs to date. The guitar solo from Gettler is spot on and is but one of many statement moments of the elite musicality of the individual band members.Pure eargasm.

Conversely, “The Tyranny of Imagination” resonates with a sense of urgency and menace. One can feel some early Opeth love here. Berry does a grand job of juxtaposing the clean singing against his growled vocals, and he really channels his inner Mikael Åkerfeldt on the harsh moments. Teachey truly shines behind the kit on this one, and Gettler is on fire here as well. I would also be remiss not to mention the brilliance of Ingram’s orchestration work. The musical ascension leading into the distorted bitcrusher outro adds a dynamic element to the end the song.

Veil of Imagination closes out much as it began, with another massive track, “When the Fire and the Rose Were One,” which opens with a minstrel-like vocal. The piano adds a contemplative feel. The song begins its build at the 3:40 mark and then its another sonorous journey of peaks and valleys for over 11 minutes, ending as it all began with spoken word.

Veil of Imagination is a revelation, packed with deft transitions and more layers than a conspiracy theory. Wilderun has delivered the equivalent of a progressive metal buffet. There is seemingly something for everyone, and no one’s ears go hungry. I could hurl superlatives around all day until it sounds like ingratiating hyperbole, but simply put, with Veil of Imagination, Wilderun has created one of the best records of the last decade. That said, to be fair to yourself and the album, one must set time aside to immerse in the entirety of the record. It should not be done in doses; a song here, a song there. It is a full entity that must be experienced as such. You’ll need a mental breather afterwards but the reward is worth the investment of brain cells.