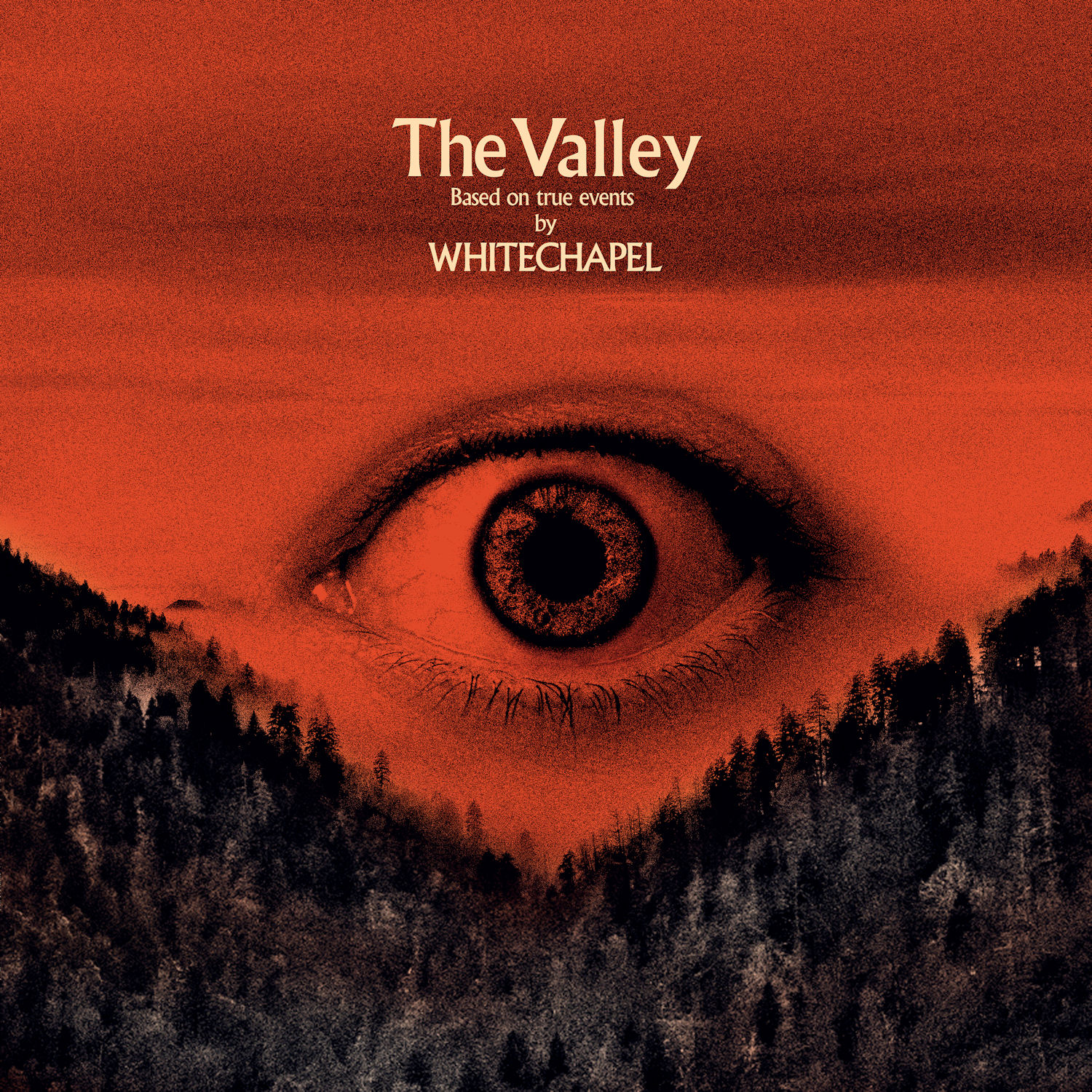 Tennessee Deathcore royalty, Whitechapel, revealed its 7th album, The Valley  this week. Before I knew anything about the album or song list, I just pressed play. Being an avid listener and catching them on tour anytime they’re in town, I knew what I was getting into yet expecting some new twists, and they absolutely delivered on every level. Their music attacks from the first track, and they draw you in, commanding your attention with their performance and presence. This is how I’ve always felt about Whitechapel. I think of them as “Ol Reliable” in the face-melting department and this album did not change that perception.

The Valley  was a pleasant possession, as each song took me inside the gut-wrenching storytelling of true events in Phil Bozeman’s (throat) childhood life. Starting with the first song “When a Demon Defiles a Witch” which is pure Whitechapel, yet has oddly progressive and dramatic elements contained within. The most eyebrow raising five minutes and four seconds I think I’ve experienced when you hear a deathcore vocalist go from deep pig growling to melodic and clean vocals. They really took a new approach to adding more variety in the Vox department than the familiar deep from the gut, growls you typically get with Whitechapel. Then you find a technically genius drummer, Navene Koperweis (Entheos, Animals as Leaders, Animosity) to add his talents of hard-hitting patterns and off time beats to the fire. This song punched me right in the face. A haunting bass line from Gabe Crisp,  alongside frenzied, fast climbing guitars from Ben Savage, Alex Wade, and Zach Householder each adding layers that will give you chills. This track is quickly becoming a favorite from the album. “Forgiveness is Weakness,” follows suit in much the same crushing form, hitting with an onslaught of relentless aggression. This is prototype Whitechapel.

That low growl into a chant at the beginning of “Brimstone,” swept me away into what felt like a haunted house where each instrument chased me around, terrorizing me around every corner. My heart was pounding with every note, through doorways, trying to get away, only to be caught by his thirsty inner demon. Fantastic song.

Oh, “Hickory Creek,” now this was an unexpected turn. Very atmospheric and raw. This is a song that’s going to stay with me forever. I heard that most of this album was inspired by the schizophrenia suffered by, and traumatic loss of Phil’s mother. As someone who has lost a parent too, the lyrics resonate and stuck to my ribs. The clean vocals are inviting, assuring, and comforting, and the guitars and bass wrapped around my body and buzzed me to the core. This song is so broody and emotive, yet different from anything I’ve ever heard from Whitechapel, and I absolutely love everything about it. When it goes from a blood curdling scream into the guitar solo and drum breakdown, it takes me to a new level of love for Deathcore.

This moves into the mammoth muscular riffing of “Black Bear,” which offsets the pace and flow, giving balance to the album. Meanwhile, “Third Depth” adds some more atmospheric textures and real emotional vulnerability to The Valley. But do not be thrown by  this. There is no shortage of bludgeoning riffery and mayhem. Other track’s that will call you to the pit include; “We Are One,” “The Other Side,” and “Lovelace”. Each of these songs offer unique flavors adding to the storyline, building anticipation, guiding you. I felt that these stand out songs would quickly become mosh pit favorites because while listening to them, I broke out the windmill hair, whipping around and headbanging. My dogs joined in on the fun too! Sick and intricate crash cymbal patterns and heavy double bass. The guitars are thrashy and catchy, with clean chord progressions. Bozeman’s vocals go from gravely to witchy, and the tone levels are superb. The latter in no small part due to the masterful hand of producer Mark Lewis (Cannibal Corpse, The Black Dahlia Murder, DevilDriver).

The last song on the album, “Doom Woods,” is groovy. Love the cymbal pattern from Koperweis in the beginning and throughout. Dark demonic lyrics and vocals, plus a harrowing and magical guitar solo. I felt this song pierce straight to my veins, moving throughout my body, hitting me in different waves.

There is so much going on in this album from a technical standpoint that you really have to listen carefully to absorb it all. Each song tells you a story. Riffs on top of riffs on top of sensational riffs, wailing solo’s, chunky, frenzied. I found the different tuning between high and low on the bass and guitars worked extremely well. I think they found the right drummer for what they were hoping to create with this album; more intricate, detailed, and technically God like heavy off-time patterns, a plethora of kick ass cymbal crashes at the perfect time, double bass and fast blast beats. Lyrically, it’s very dark and straight in your face, nothing less would be expected of Phil. He has always been a vocalist that sucks you in with his storytelling ability. I like their vocal approach over all with the album, Phil demonstrates there’s nothing he can’t do with his vocals. I appreciate Phil sharing a dark time in his life with us through his lyrics, something that can’t be easy for anyone to do. In several moments throughout the album, I felt like I was right there with them experiencing everything they were feeling.

The Valley is easily Whitechapel’s most personal and ambitious effort to date. We can really hear and feel the ongoing maturation of the group’s songwriting and sound evolution. Bozeman opened a vein on this one, showcasing his personal trauma and allowing the listener to experience his grief and vulnerability as he struggles to move forward. At the same time, the band has not lessened its aggression or brutal tendencies. This makes The Valley  a more diverse and compelling affair that should speak to fans on multiple levels. I think this is going to be a fan favorite from this band for years to come.

So, what are you waiting for, just press play!!

Geez, what to say about myself. From a young age, I knew I was destined to be a metal head. When you grow up in a town where there's more cow's than people, you find ways to entertain yourself. I remember being in 3rd grade when I heard Metallica for the first time, I got goosebumps, an overwhelming rush of the style of music they were playing absorbed me, I was hooked. I never wanted that feeling the music gave me to end. My tastes for heavier, harder & faster music has grown since, some of my favorites include: Lamb of God, Black Sabbath, Hatebreed, Tool, Slipknot, 36 Crazyfists, Pantera, Deftones, In Flames, Mastodon, Killswitch Engage, Gojira, A Perfect Circle, Taproot & Chevelle! Just to name a few. These bands are in my playlist forever. I try to play guitar, piano & drums. Self taught, not the best but I try & have fun with it. I bought a drum kit a couple years ago. I grew up dancing, jazz, hip-hop & clogging, so I thought WTH, I'll try it, now I'm obsessed! Concerts are my therapy & metal music has my heart. You'll probably find me in the front row of most metal shows! Thanks for checking out my reviews. ???