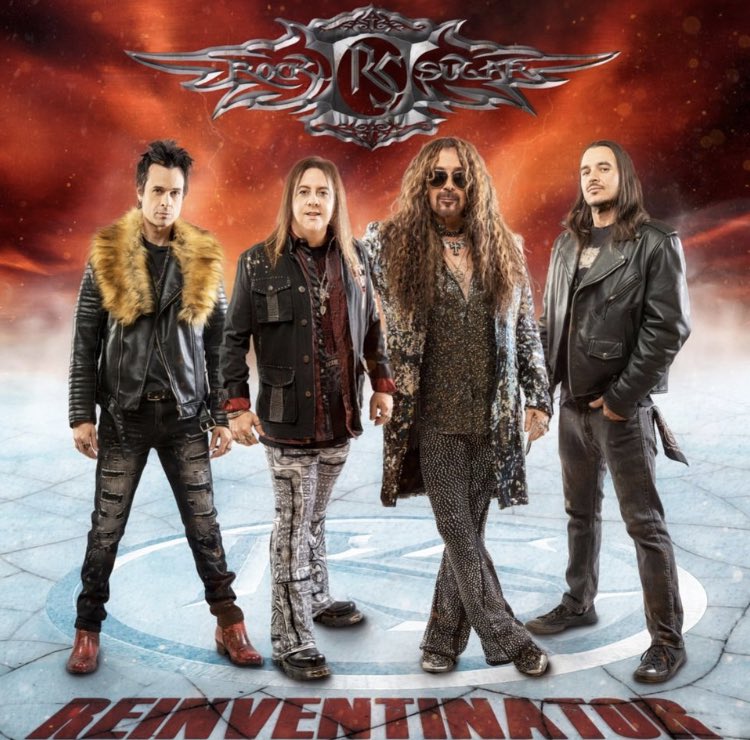 It’s difficult to fathom that 11 years have passed since Rock Sugar shook the world with its debut album, Reimaginator. This band of wayward geniuses took mashups and tributes to new heights with that first record, and fans have been clamoring for more for the last decade. The story behind the band and its art is as convoluted and crazy as the songs they meld together with their combined talents. Who would have imagined Paula Abdul and Kiss, or Metallica and Journey, or even AC/DC and Madonna, as fantastical sonic fodder for mind-blowing new ear candy? Reimaginator saw this motley troupe of rock and roll rebels combine parts of 33 different classic pop and rock hits into 13 cohesive and brilliantly performed masterpieces. Reimaginator is the ultimate party album. Nothing better than putting this on and watching your friends’ heads snap sideways when “Bohemian Rhapsody” collides with “Kickstart My Heart,” or when “Crazy Train” is boarded by “Jessie’s Girl.” And now, we get the next chapter of this rock and roll thrill ride, Reinventinator.

Rock Sugar was formed by Hollywood voiceover legend Jess Harnell and his mad scientist producer and guitarist, Chuck Duran. The duo created a backstory for the band that saw them stranded on a desert island with only their own heavy metal love and their kid sister’s boombox loaded with a mixtape of old school pop anthems. As their minds melted under the hot sun, sense of time and reality lost, their passion for playing rock and roll grew and soon classic songs began morphing into one another. Once the guys were rescued, they went straight into the studio to record these infectious new abominations, and the world rejoiced.

Back on dry land the boys began to try and re-assimilate, but a whole new generation of pop music had emerged in their absence. Like deranged audio junkies they returned to their lab, eh studio, to make more Frankenstein mashups. While two of their erstwhile bandmates got help for their desert island affliction and returned to a normal life, Jess and Chuck could not, would not, go back. They indoctrinated two new members into their obsession in drummer Kevin Kapler and bassist Michael Christopher. The lunatic fringe became whole again, and after the world endured one of the darkest years in modern times, Rock Sugar reemerged with the headbanging panacea, Reinventinator. The new record features 14 tracks that combines 50+ songs. Yes, they are clearly out of their ever-loving minds.

So here I will stop to confess that I am a Rock Sugar addict in my own right, and I consider Jess and Chuck to be friends. I love what these guys are doing, and no one can do it quite the way they can. That said, I will endeavor to put on my critic hat and be as honest and fair in my assessment of the new album as possible. For those less familiar with the band, you should know that you won’t be able to find this in stores. After the release of the debut album, one particular whiny rock star decided Jess’ ability to duplicate his vocals was simply too good and refused to let the band sell their record. I won’t name names, and that diva may not be the only one at this point, because Jess and the crew are just that damn good at what they do. The guys now offer supporters, through their own Kickstarter crowdfunding campaign, a chance to buy commemorative coins for each album, and they give fans the music for free with each coin.

Whether you believe Reinventinator to be as good or better than its predecessor may depend on your love for more modern rock and pop songs released after 1990. With Reimaginator, the oldest song on the record was Metallica’s “Enter Sandman” from 1991. Reinventinator includes newer songs from artists as varied as Linkin Park, Adele, Bruno Mars, Fall Out Boy, Nirvana, Lady Gaga, and Katy Perry mashed up with classics from the likes of Journey, AC/DC, Guns ‘n’ Roses, Aerosmith, Queen, Motley Crue, and many more. As a whole, I believe that Reinventinator is a larger, bolder record with more nuance and diversity. For most people, this is a wonderful thing, for me it’s making it harder for me to appreciate the album as fully as I should, but that does not detract from the genius of what Rock Sugar has created.

The album opens with “Walk in Black for Centuries” which includes a combination of Aerosmith’s “Walk This Way,” AC/DC’s “Back in Black,” and Fall Out Boy’s “Centuries”. It is a dynamic way to open the record, and while I am not a Fall Out Boy fan, they picked a great song, and this track works really well. Down the stretch they also side shuffle into Guns ‘n’ Roses’ “Paradise City” with a bit of Toto’s “Africa” tossed in. Jess’s lovely wife Cara Harnell even makes a brief cameo at the outset with a smidge of Suzanne Vega. I am not going to give away all they extra song choice tidbits for each track as I want fans to experience some of these nuances for themselves, but this is a hefty way to kickstart the record.

The opener is followed by the track that I struggle with the most, “Crawling Numbly to Somebody Bohemian”. There is a lot of Linkin Park and Queen love on this one. Not being a Linkin Park fan (okay, I can’t stand them), this one is perhaps my least favorite track on the record. That said, most listeners should love this. They manage to blend elements of 10 different songs into one track, which is mind-numbing to imagine.

Track 3, “Faithful Child O’ Mine” harks back to the feel of the debut album, a perfect blend of Journey’s “Faithfully” and GNR’s “Sweet Child O’ Mine”. Sweet perfection is what it is. In that same vein they tap into Motley Crue, Tears for Fears, Slaughter, and a bit of Led Zeppelin for the album’s first single/video, “Shout at the Devil Dog All Night”. They guys even got Mark Slaughter to lend some vocal talents to the track as well.

Billy Idol sidles up to Bruno Mars for “Rebel Out of Heaven” while Don Henley trips Motley Crue’s “Live Wire” on “Wires of Summer”. Continuing to lean into Crue, the band mashes up “Home Sweet Home” with Adele’s “Someone Like You” on “Someone Like Home”. There is also a little nod to Night Ranger down the stretch, but I’ll let you discover which track on your own.

Another monsterpiece comes in the form of “Smells Like Teen Romance of the Night”. If you’re guessing Nirvana, Lady Gaga, and Whitesnake, you’d be correct. The angsty vibe of Nirvana’s seminal grunge anthem should not work with the upbeat histrionics of “Bad Romance” or the fervor of “Still of the Night,” but somehow it does. Maybe that’s because Kurt Cobain was trying to write a pop song when he created it. Either way, the guys crush it here.

Bon Jovi teams up with The Outfield for “You Give Your Love a Bad Name”. A perfect collision of songs to keep you awake in the wee hours of the morning when your brain just won’t shut down. This pairs nicely with “Since Ur Barracuda’s Been an Immigrant”. This is one of the album’s older tracks, released to fans a decade ago to keep us wanting more. Kelly Clarkson is fermented with Heart and Zeppelin on this track.

What do Stevie Nicks, Phil Collins, Survivor, and Pink Floyd have in common? They’ve been sugarcoated. “Another Edge of the Tiger in the Air” brings them all together for one walloping aural punch. This leads us into two more tracks that Rock Sugar has released over the last decade for their ardent supports; “Roll You in the Hurricane” and “Any Highway You Want”. The former mixes Adele and the Scorpions with a bit of Cyndi Lauper, while the latter pairs Journey and AC/DC.

This takes us to the album closer, “Countdown to Fireworks” which combines Europe’s iconic hit “The Final Countdown” with Katy Perry’s “Fireworks”. This was initially the track I was most critical of because I love both songs and Rock Sugar has made the match up work, but to my ear it felt/sounded a bit forced. You have a bold epic anthem that drops into a huge pop beast. That said, the more I listen to it, the more I appreciate it. That is perhaps part of why Rock Sugar works so well, they can surprise us with songs that seem like they have no chance of success and then BOOM, they prove you wrong.

If you’ve stuck with me this long, I thank you for your perseverance, but as Rock Sugar fans we understand waiting and endurance. I still don’t know that I can decide which album is better. I love the classic feel of Reimaginator, but I also appreciate all the EXTRA the band fortified Reinventinator with. The best part is, it doesn’t matter, because they are both packed with ear worms that will never leave my brain or my various audio players. My Jeep’s been running on Rock Sugar for over a decade, and that’s not changing anytime soon. With Reimaginator, Rock Sugar told us that “Pop Rocks”, well with Reinventinator its only become that much sweeter and heavier. Now that we have two albums the party can go even longer. Here’s to hoping we won’t have to wait another decade for album number three.