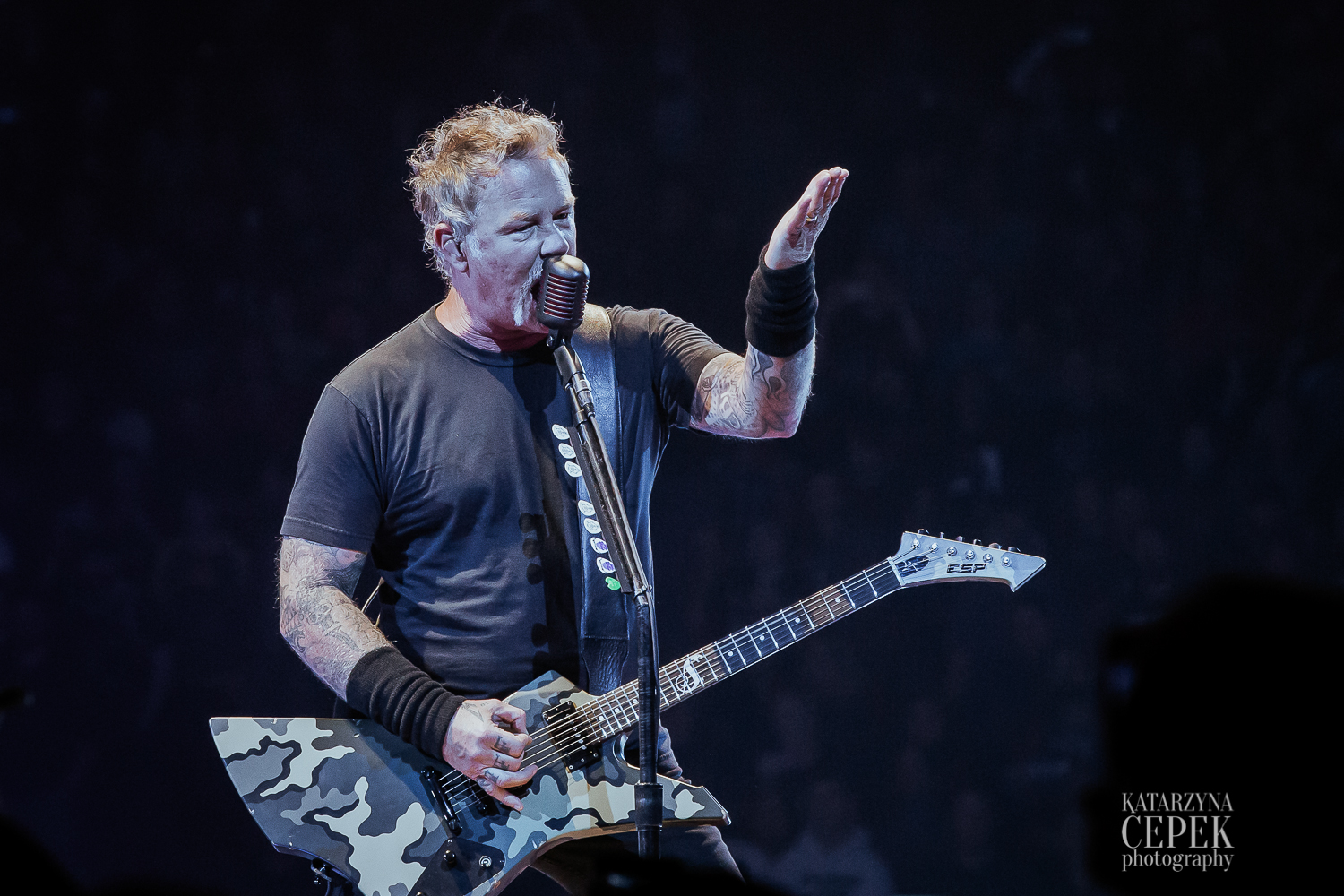 A lengthy nine years have passed since Metallica last graced Boise, in December 2009. They have only performed in the City of Trees a half dozen times over the years. Wednesday night, the quartet returned to the Treasure Valley and laid a neck-snapping, bone-triturating juggernaut of a show on Idaho’s long-suffering supporters. The band is touring in support of its latest album, Hardwired…to Self-Destruct. Fans and critics alike have hailed the album as the band’s strongest output since the group’s iconic 80’s releases.

Metallica have been at the forefront of heavy metal for over 35 years, and while they began as progenitors of the thrash genre, they have eclipsed their humble beginnings by miles. They now sit alongside the likes of AC/DC in that rarefied rock and roll air of those artists universally loved even by those who do not normally listen to heavy music. They are among the last of the true rock stars, in a generation that no longer creates anything so memorable or lasting. There will never be another band as monumental as icons like Led Zeppelin, Queen, or Metallica. A fact that is tragic, but one that makes fans appreciate the grand spectacle of such events all the more. And make no mistake; Metallica brought the goods, both sonic and visual, on this night.

Unlike their 2009 tour when they had Volbeat and Machine Head in tow, this time they opted for headbanging and humor, courtesy of former Saturday Night Live alum, Jim Breuer. The comedian served up several of his favorite bits in support of his 2016 album, The Loud & Rowdy – Songs from the Garage.

Metallica hit the stage in a barrage of seizure-inducing flashing lights, for the crushing track “Hardwired.” The near 12,000 fans in attendance at Taco Bell Arena lost their collective minds–a fitting response to an electrifying opening onslaught. The fans themselves ran the gamut from children and tweens to mid-life metalheads and the Geritol generation. “Don’t be afraid. I see old people,” Hetfield announced. “I’m one of them. I also see the youth of the Metallica family is here tonight.”

The stage appeared to be the same design as the 2009 tour; a large square in the center of the venue, with drummer Lars Ulrich’s kit rotating on and off throughout the show. The band, led by frontman James Hetfield, thrashed into another new song, “Atlas, Rise!” Next they stunned the crowd with “Seek and Destroy,” a vintage track usually reserved for their encores.  During this song, a series of LED cubes raised and lowered above the stage, displaying different visual elements, including classic photos of the band as well as live footage. 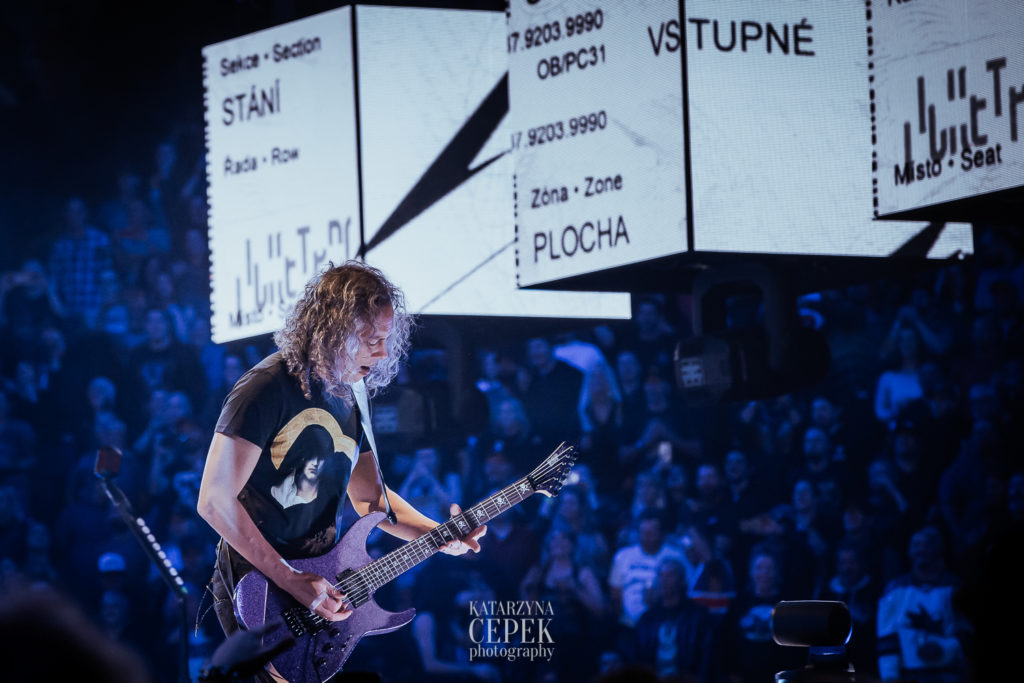 As they have done on every stop on the tour, Metallica changed the set up a bit, tossing in a few songs not performed each night, beginning with the mosh-inducing, “The Memory Remains.” Another, “The Four Horsemen,” came via fan request. 20-foot spouts of flame scorched the air as the foursome ignited “Fuel.”

Hetfield, along with guitarist Kirk Hammett and bassist Robert Trujillo moved about every corner of the stage, giving fans on all sides a chance to see them all perform. They often congregated center stage around Ulrich’s kit at various times during the set–frequently during guitarist Hammett’s never-ending barrage of shredtastic solos

Metallica churned out a stunning 18-song, 2-hour-plus headbanging extravaganza. They played a healthy dose of the new record, which also included; “Spit out the Bone” and “Now That we’re Dead.” They also performed “Moth into Flame,” offering up one of the evenings great visual highlights. During the song, which is about addiction to fame, a series of synchronized drones hovered and flitted in the air above the stage, like mechanized fireflies. As our photographer, Katarzyna Cepek noted, “it was a creative way to incorporate something high tech into their set, yet it had a very organic feel.”

The quartet did not disappoint in the old-school category either, performing seven Metallica classics from the seminal first four records. Among the highlights were “Creeping Death,” “For Whom the Bell Tolls,” “One,” and “Welcome Home (Sanitarium).” The latter featured bassist Trujillo giving a nod to Boise’s musical legacy, singing Paul Revere and the Raiders’ “(I’m Not Your) Steppin’ Stone,” as well as soloing out.

For those who discovered Metallica with 1991’s best-selling and career-altering “black album,” four songs were dialed up. “Sad but True” and “The Unforgiven” were played in the main set, while the band saved “Nothing Else Matters” and “Enter Sandman” to close out the show.

Metallica pulled out all the stops Wednesday night, and when you only get an opportunity to see them once a decade, that’s all a fan could hope for. Most in the crowd have grown up on a heavy staple of the band’s music. There were arguably some lean years, and now the young rebels have grown into the old midlife crisis guys on the block, but they’re still pretty damn cool. It is almost impossible not to enjoy and be impressed with America’s premier metal band. After almost four decades, they feel like part of our extended families, and Hetfield made sure to tell the crowd each one of them were part of the Metallica family, “Always and forever.”