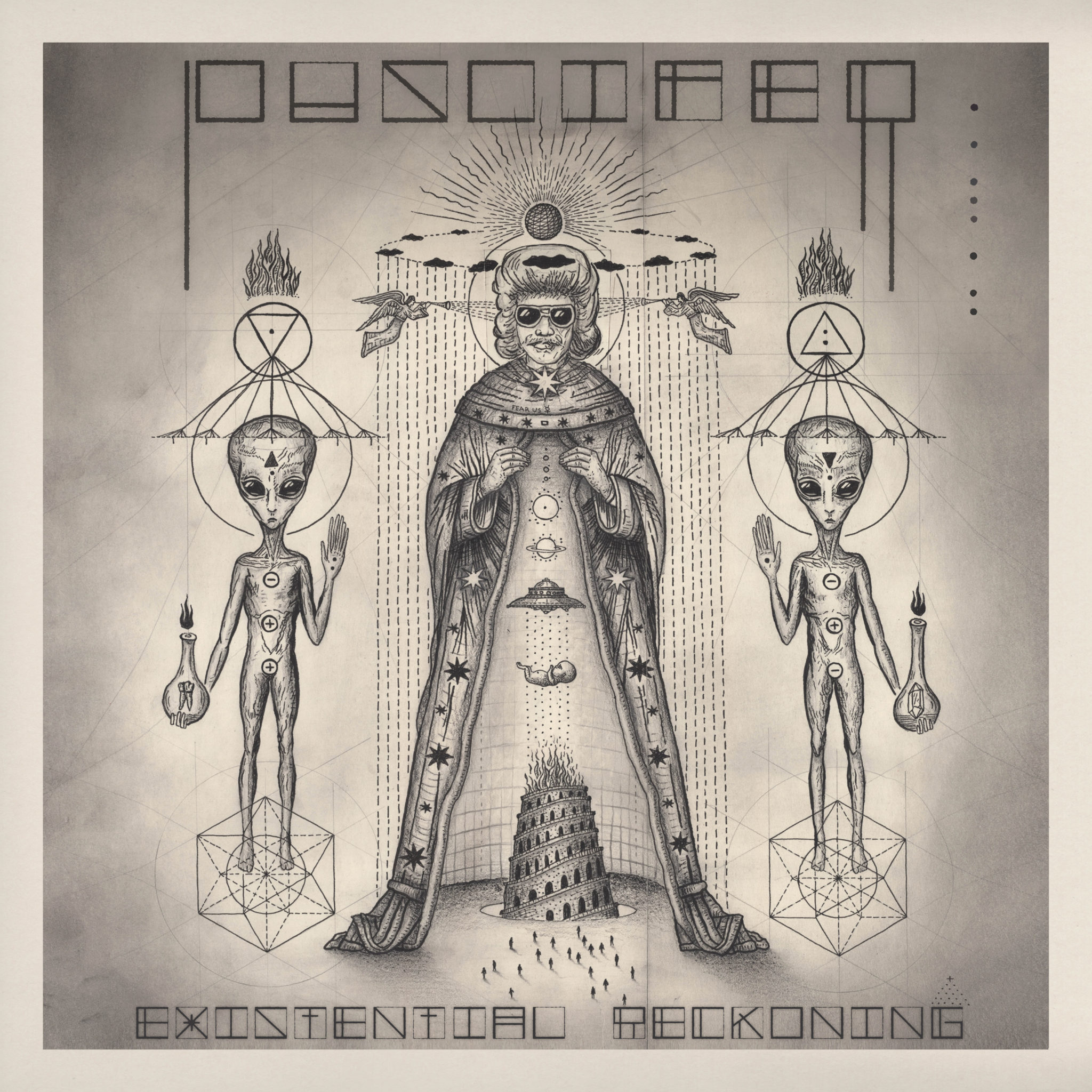 Electro-rock band Puscifer has orbited back onto Earth to release new music for our earholes. Straight out of another planet, Existential Reckoning tackles the world and philosophical underpinnings like Maynard James Keenan tends to do. This ride appears to start out with explaining where they believe we are as a society and as individual people. This entire article will clearly be based on subjectiveness, because I don’t know what he is specifically talking about. Just my interpretations of the lyrics.

Invading Earth staring in 1995, Puscifer embarked upon the human land and began projecting their musical elements. Musicians: Keenan, who has made frequent Earth appearances with other bands such as Tool and A Perfect Circle, (vocals), Mat Mitchell (guitar, bass, keys), and Carina Round (vocals, keys), collaborated to expend their soundscape energy. Joining them are the additional musicians, Greg Edwards (bass, guitars, keys), Gunnar Olsen (drums), and Sarah Jones (drums). Previously releasing “V” is for Vagina in 2007, Conditions of My Parole in 2011, and Money Shot in 2015, Existential Reckoning is their fourth full-length album. There have been EP’s and remixes along the way as well. 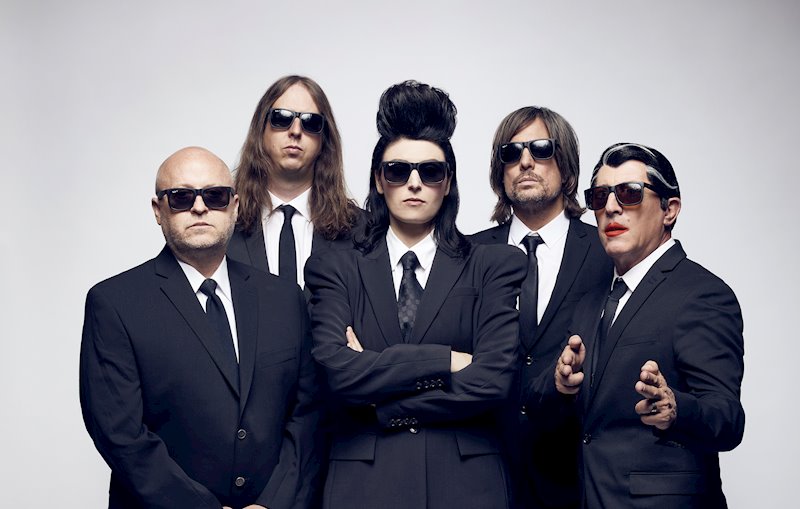 Acting has humans to give us an important message, Existential Reckoning begins with “Bread and Circus”, where they claim, “We are in the middle of our existential reckoning”. Carina’s voice echo’s beautifully in the background. This is the start of a full circle explanation of where our society is and how we are individually responding, responsible, etc.

“Apocalypitcal” has been previously released and I’ll be damned if it doesn’t get stuck in my head often. See what I did there? It is a good argument with a somber message, “Go on, moron ignore the evidence”. You decide for yourself, I feel this is fairly clear. He speaks about moonwalking at one part, where I feel he is explaining that we appear to be moving forward, but are actually moving backwards. What do you think?

“The Underwhelming” has also been previously released. I feel this song talks about how these two types of humans and beliefs, are so divided, “glorious friction”, but this is helping people start seeing through the bullshit. Now people are able to see more clearly because of the extreme divide. Again, my interpretation.

“Grey Area 5.1” is a trip of a song. MJK mentions how we are in the “age of confusion”, which I think we can all agree on. It begins with an electronic drum beat and the vocals have an effect added to them to make them a bit more sinister. My favorite lyrics on this whole album are in this song; “Nothing factual, nothing fictional, interchangeable, so expendable”. Trying to find correct information anywhere right now can turn into a nightmare really fast. This is my second favorite song all together. Reminds me almost of an 80s type vibe.

“Theorem” begins with a sound that reminds of the 80’s game, Simon. These vocals also have an effect added that make it sound alien-like. Carina’s vocals harmonize eloquently. “Seek the Balance”  is the song that begins explaining what is in our control versus what is not. “Work the Science” is an interesting song all around. “UPGrade” is my favorite song on this record. It is difficult for me to interpret these lyrics for many reasons, but mostly because I dig the soundscape so much I struggle with paying attention to the lyrics. When I do listen to the lyrics, I feel there are many ways to go. For me, it is almost explaining how we can be controlled by people’s words, almost like “magic”. How someone’s words can either make you feel better or worse.

“Bullet Train to Iowa” is basically saying to “enjoy the ride” until we are able to ground ourselves again as a society. I believe the train is a metaphor for our world right now. He might even be saying to take an ayahuasca trip to get through it and see a different type of world while this one is so complex.

“Personal Prometheus” starts with a melodic keyboard sound and dips to a dark and ominous tone. Prometheus is an intelligent, knowledgeable Titan god of fire and is known for being a hero to the human race. I feel this song is trying to say to take back your thoughts and life. Use intelligence, scientific based knowledge, and be a hero of your own persona. Carina has an almost tribal sound as she again dives into echoing MJK’s vocals. “A Singularity” seems to be discussing death. I am not sure if it is death of ego, personal beliefs that need to be challenged, or a more literal meaning. I hear it as killing parts of ourselves that no longer ring true. “Invade, inquire, probe, grow”. I love this.

“Postulous” repeats lyrics from a previous track, but in a more light and electronically uplifting way. It is a song that seems to take this part of us that we killed, and start turning it into what we are wanting to be. “Seek the Balance”. “Integrating to ensure our continuation. Assimilate the elements, we are on a mission.” The second to last track, “Fake Affront” is where he seems to take back his thoughts and is now seeing clearly. MJK yells, “We have heard it all before, shut up!” and Carina continues, “Shut the fuck up!” I found it interesting how he put a clear meaning in this one, “Far right, far left, same shit”. We all know Maynard is not afraid to stand his ground with his beliefs, this is a foundation he has set for himself. I like the aggressiveness in this song and this it fits perfectly as the album has flowed.

“Bedlamite” is an incredible track. I am not entirely sure if he is being factious here or not, but I don’t take it that way. I think it is a message of, regardless of what happens, it will be okay. His vocals take a deeper tone and he urges, “Write your own fable. Believe it will all work out”. The chorus rings out with softer and melodic vocals stating, “It’s gonna be alright, everything will be alright”. The calming soundscape would be a good fit for a meditation song, with a little extra electronic action. It is a perfect ending for a very emotional and insightful album.

We all need to be better human beings. Whether you agree with Puscifer’s stance or not, I think there are many nuggets of philosophical meanings everyone can take away from this album. It is heavy on electronics, but has some nice musical twists and turns. Take some time to try it out.