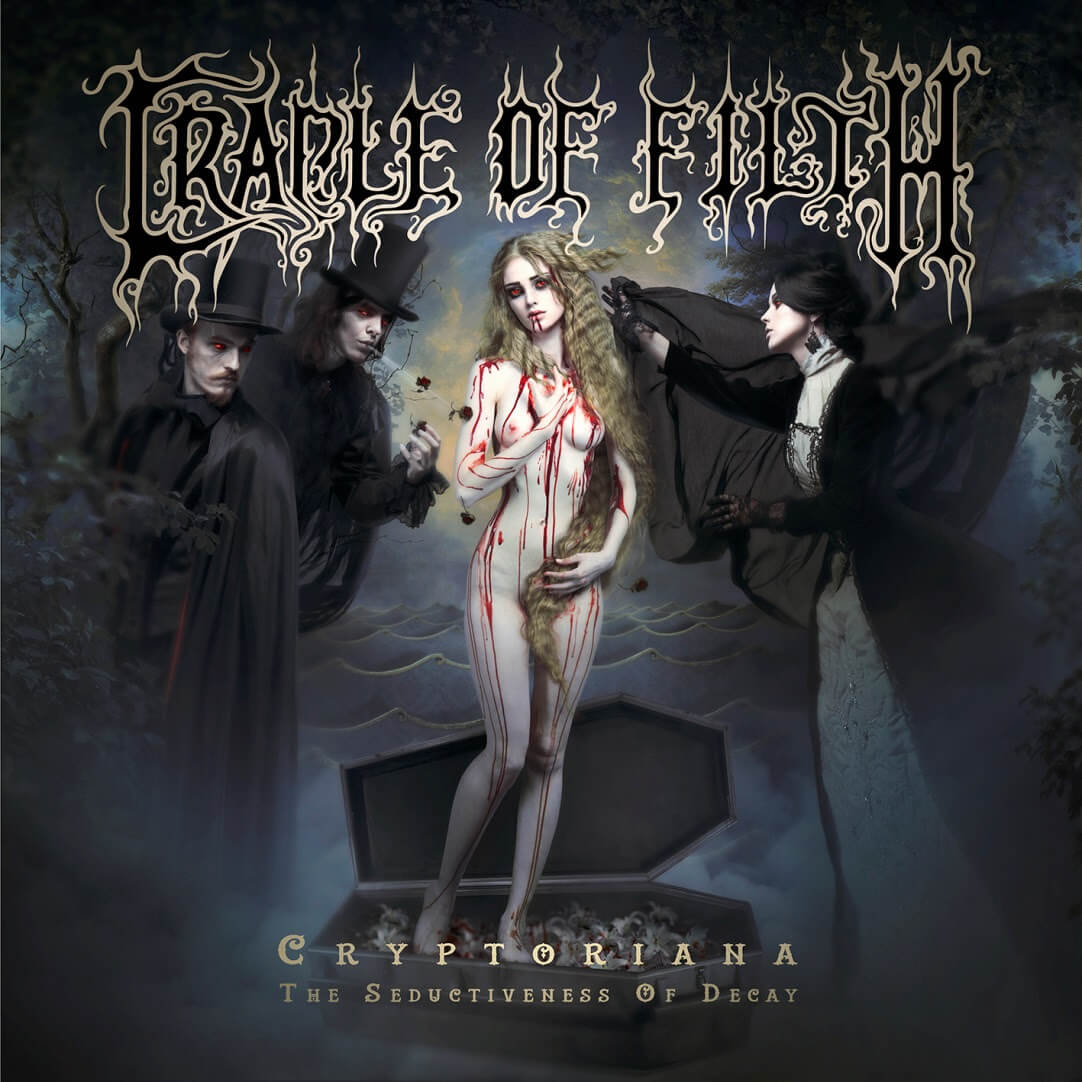 Cradle of Filth – Cryptoriana – The Seductiveness of Decay Review

Cradle of Filth has been rather generous with their consistency of new albums in their later years. The English Symphonic Black Metal 6-piece just released their third album in three years, Cryptoriana: The Seductiveness of Decay. The album follows the 2016, 20th anniversary re-issue of  Dusk and her Embrace: The Original Sin, and 2015’s Hammer of the Witches.

The band released three singles in advance of the album’s debut, and each of them showcased the promise this record had before it was in anybody’s hands; unless you illegally torrented it, in which case shame on you. But I digress. One track in particular, the first that had been put out to the masses, “Heartbreak and Seance” really struck a chord with me. The tune is an onslaught of blast beats with almost thrash undertones at times. Most of the album seems to have those qualities, as well as their previous work. A nice little touch to this tune is the intro track to the LP, “Exquisite Torments Await,” which sets the table as a prelude to “Heartbreak and Silence,” and flows directly into it. I didn’t predict that after viewing the track list that it would have been structured the way it had. It caught me off guard at first because I had been used to listening to it as a stand-alone track. Furthermore, I think it was a nice way to open the album as well as introduce the familiar elements of the album to those who had previously heard it.

Dani Filth’s voice has aged very well since the band’s 1991 inception. He can still scream like a banshee and wow audiences with his incomprehensible vocal range. However, I think there is a more important vocal aspect to the album that should be discussed, and that element is keyboardist Lindsay Schoolcraft. In her four years with the band, she has not truly showcased her vocal presence in the group, but this album does ample justice of highlighting the siren-like qualities of her voice. I feel that it adds another layer to the band’s sound that wouldn’t be obtainable without her contribution.

I think the most admirable aspect of this album is the musicianship that created it. Every note sounds like it’s supposed to be there, every transition fits well. It’s almost humbling as a musician to listen to. You have tracks like “You Will Know the Lion By His Claw” that would tongue-tie anyone who dare try to sing along, “Wester Vespertine,” which demonstrates the complexity of their instrumentation and their ability to stack everything together in the recording’s crystalline-like qualities, and the title track “The Seductiveness of Decay” which does both!

Overall, Cryptoriana – The Seductiveness of Decay is phenomenal. From guitarists Richard Shaw and Marek Šmerda’s ability to fit right in the pocket of Martin Skaroupka’s drumming while pumping out jaw-dropping leads and licks, to the sheer ambiance this album has. This is one that will surprise those who have written off the band for whatever reason, die-hard fans, and those who have never heard Cradle of Filth alike.