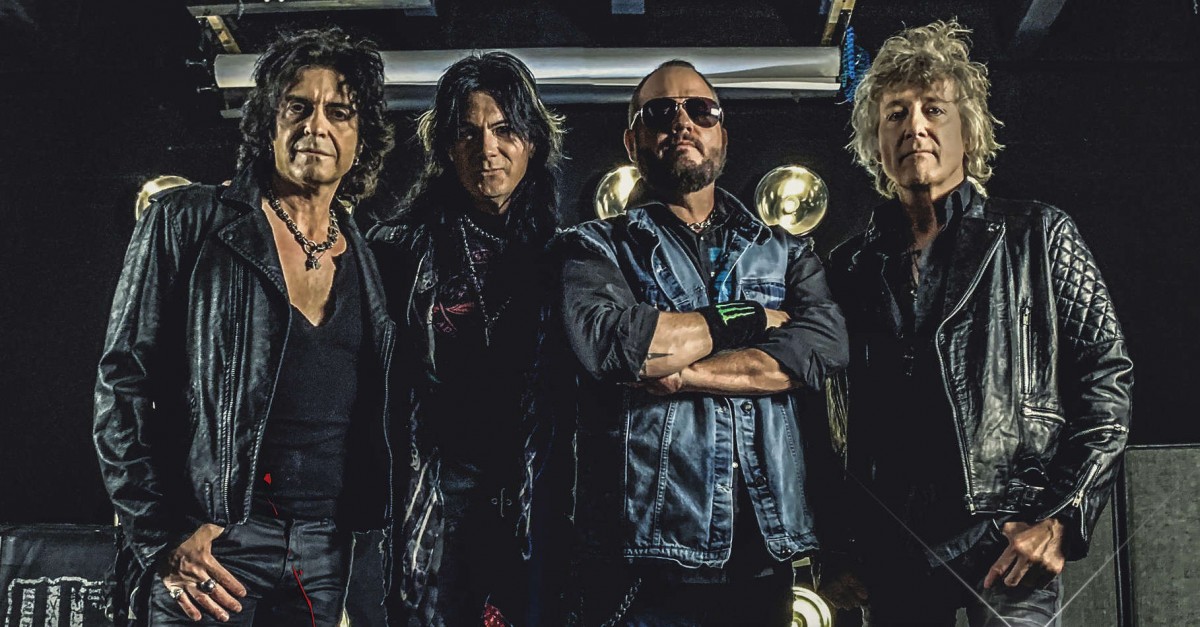 Housed within the quartet that is A New Revenge is a metric ton of talent and experience. By that standard, most would hail them as another “supergroup,” though they would be quick to disabuse you of that notion. They are just four guys who happen to love making great rock and roll, and their resumes demonstrate that they have a knack for doing it well. That passion has culminated in the band’s long-awaited debut album, Enemies & Lovers, released March 29th on Golden Robot Records.

The germination of what would become A New Revenge began as Project Rock, the brainchild of guitarist Keri Kelli (Night Ranger, Alice Cooper) and former Scorpions drummer James Kottak. Powerhouse vocalist Tim “Ripper” Owens (Judas Priest, Iced Earth, Spirits of Fire, The Three Tremors…) found himself recruited into the fold as well, and a series of shows were staged in Russia, where the band played songs from their various bands. Over time this began to morph, with Kelli writing riffs and song ideas down and sending them over to Owen, who in turn began to craft vocal melodies. With Mr. Ubiquitous, Rudy Sarzo (Ozzy, Dio, Whitesnake,…) also on board, the quartet recorded their debut record, Enemies & Lovers. The album’s sound delivers an infectious blend of vintage hard rock with a contemporary heavy sound and modern production.

On the album’s release date, Metal Nation caught up with Keri Kelli in Las Vegas while on tour with Night Ranger. We spoke about the band’s formation, the direction of their music, and the debut album, Enemies & Lovers.

Tell us a bit about the writing process for the record, because this is really the first time you’ve had a chance to spread your wings in that regard.

“These days, everybody has home studios. I have a pretty good studio at my house, with the drums all set up and mic’d. The whole nine yards. I would just write riffs. Things that I thought sounded cool. I would add the drums on there. I don’t really play drums so I’d add these drum loops. Sometimes I would have these melodies, or lyrics, or ideas for that, and sometimes I wouldn’t.  I would send 2 or 3 songs over to Tim, and a few days later he’d get back to me and say ‘That song number 3. I like that. It’s killer.’ He would work on that song # 3, send it back to me, because he’s in Ohio and I’m in California, and then we’d develop that song. There were a lot of ideas, not songs necessarily, written for the album. Probably 25 ideas, and then we kind of narrowed them down between Tim and I and came up with the 12  that we actually recorded for the record.”

Did you and James have a vision in mind for the sound of the band, or did that just develop as you started writing?

“No. No sound, Nothing. literally. That’s why I think it’s so natural, this record and this band, because we had no agenda. There was no record deal. It wasn’t like we had to write 10 or 15 songs in two months to do this record. We were just doing it as we went. It was basically myself, and then Tim would be the sounding board. It just developed as it went.”

I spoke with Tim a few weeks ago about all 3 of his current projects, and I have to say of everything he’s ever done, this one really showcases the diversity of his vocal abilities. He’s not just out there howling and wailing, he’s showing all of his versatility.

“Absolutely. And I think everybody did a really incredible job on the album, honestly. It was a labor of love. There were no monetary issues. We were just doing it to do it, to write songs and create. But Tim, I think people are going to be pleasantly surprised–cause they think of Tim, and maybe they love Tim for what’s known for, the screams, and the Priest and all that, and we do have some of that on the record, some heavier songs–but he does really showcase that he’s an incredible singer, melodic, cool inflections in his voice. It’s not wailing or screaming metal stuff all the time. He did an incredible job and I’m really proud of him and everybody on the record.”

The first single on the record “The Way,” is a pure ripper but very addictive. And you can feel that Kottak rhythmic groove. Tell us a bit about that track and why you chose to put that out as the first taste of the band.

“It was just by chance. I don’t think there’s really  any singles anymore, unless you’re like Imagine Dragons or somebody like that. They just call them lead tracks, like what are you going to lead with? It just happened to be that track, ‘The Way.” And then the next track, ‘Never Let You Go’ is a little more commercial. I think ‘The Way’ is just an incredible representation of the band. It’s hard rock. It’s not crazy. I love the guitar riff, that really staccato  metallic guitar riff. Then Tim sings in the holes, perfectly.  When they said we wanna lead with this track, i was down with it. I love it. Awesome.”

One of the songs that jumped out at me was “Only The Pretty Ones.” It reminds me a bit of something your former boss, Mr. Cooper might have done.

“Yes, that one is very Cooperesque, obviously.  That was actually a song I had sitting around. That song wasn’t written during this process of what we were doing. So it was there. I just think it’s a great song, so I sent it over to Tim, and he sang it in the way he did, which is very Alice Cooper as well. You know, when you’re in that Alice world, when I was in the band, Alice was a great guy. The whole organization’s incredible. You ARE like IN the Alice world. It’s a bubble. There’s so many people involved. It’s such a big production. Every day something’s going on. Even when you’re not on tour, you’re still in the bubble of Alice Cooper. So that song was definitely derived from that period. and you can obviously tell by the way it sounded. Maybe we could do a duet here. Do a new version, a 2.0 version with Tim and Alice actually.”

You can listen to the full interview with Keri Kelli below as he talks more in-depth about A New Revenge, Enemies & Lovers, and his craft beer franchise, Aces & Ales.

GODSMACK’S SULLY ERNA Establishes The ‘Scars’ Foundation As Band Returns To The Road In U.S.