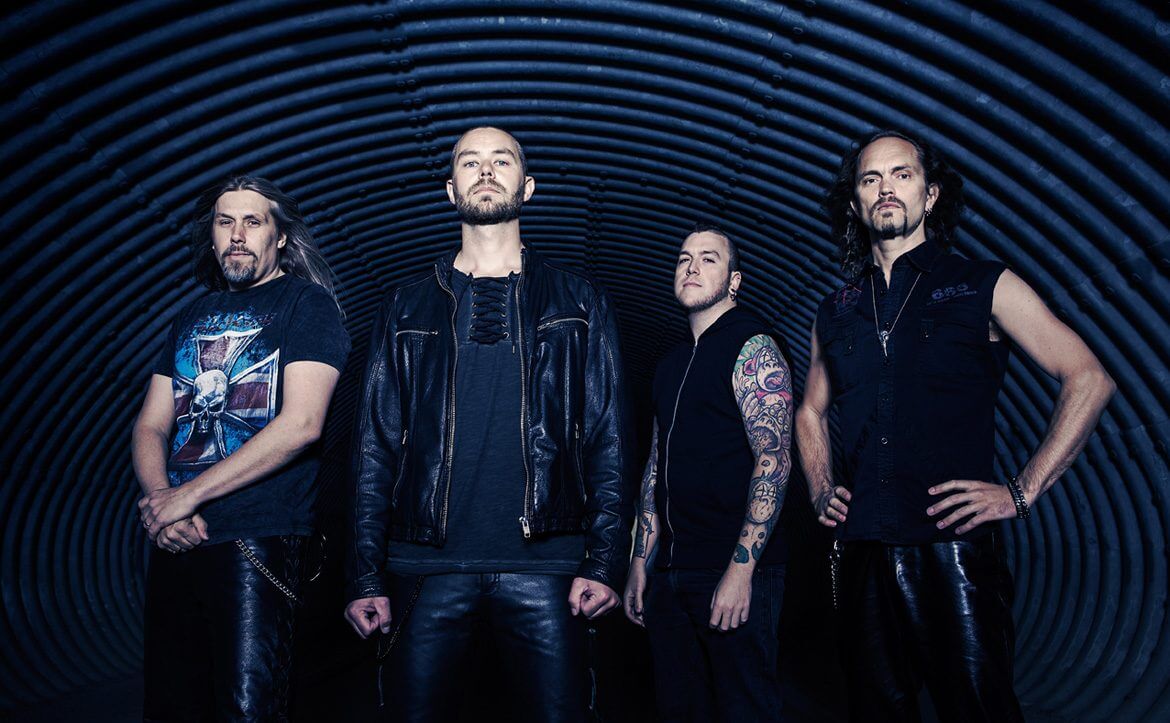 Sweden’s Manimal came together in 2001 with guitarist Henrik Stenroos and vocalist Samuel Nyman at the helm. Demos would follow in 2002, 2005, and 2006, but it would not be until 2009 that the band would release its outstanding debut, The Darkest Room. The record garnered the Gothenburg quartet positive local attention, but a lack of global promotion limited the band’s reach.

In the intervening years, Manimal‘s rhythm section, the Mentzer brothers, stepped down leaving Stenroos and Nyman to find appropriate replacements. They did so in the form of drummer André Holmqvist (Ice Age, Zero Illusions) and bassist Kenny Boufadene (We Are the Catalyst). Now, six long years after the release of their promising debut, Manimal returns with their sophomore album, Trapped in the Shadows. The long wait resulted in one of the best heavy metal albums of 2015, including taking the #9 spot on Metalholic’s Top 50 list.

As the band celebrates the new year with an acclaimed new record, and an up coming tour with Orden Ogan, frontman Sam Nyman checked in to chat about the band’s journey from moving beyond The Darkest Room to becoming Trapped in the Shadows.

Band’s like Manimal, perhaps more so than artists like Iron Maiden or Judas Priest really feel the pinch of digital piracy, and this is a topic that strikes a chord with many bands trying to break through and sustain their artistic creation.

“I don’t want to judge people,” offers Nyman. “I think bands like ours who are trying to climb the career ladder, the most important thing is that people listen to the music and hopefully show up at our shows. But never-the-less, if the product doesn’t generate any money, it’s hard to convince your record company to invest in you–invest in tours, invest in another album. So it’s still pretty important to us that people actually buy the product.”

With Trapped in the Shadows, the band shows a progression from its sound from the debut record. The songs resonate with more energy and the overall album has more continuity. Sam shared his thoughts on the differences between the two records:

“The main difference, besides the songwriting, which we have taken to another level I think, it’s the focus on the vocal harmonies and the guitar riffs. And also we have developed this thing that we started on the first album with trying different rhythms: We don’t want two songs to sound exactly the same, therefore we try with different rhythms and tempos, and I think we have focused on that even more on this album.”

The addition of the band’s new rhythm section has also added another dynamic to the outcome of Trapped in the Shadows. Nyman talked about the Manimal‘s newest members:

“I think when it comes to André, he’s  made for these type of songs. When we recorded the drums for the album, he was like a drum machine and I was so impressed by his work. So I think for these songs on this album, they have meant the whole difference, both Kenny and André. They are such good musicians and great guys to hang out with.”

During our interview, Sam also talks about having Udo Dirkschneider sing on the record, having his daughter serve as part of a creepy choir, and he shares three albums that changed his life; including Judas Priest, Queensryche, and Dream Theater. Listen below to find out which records and hear all about Trapped in the Shadows.