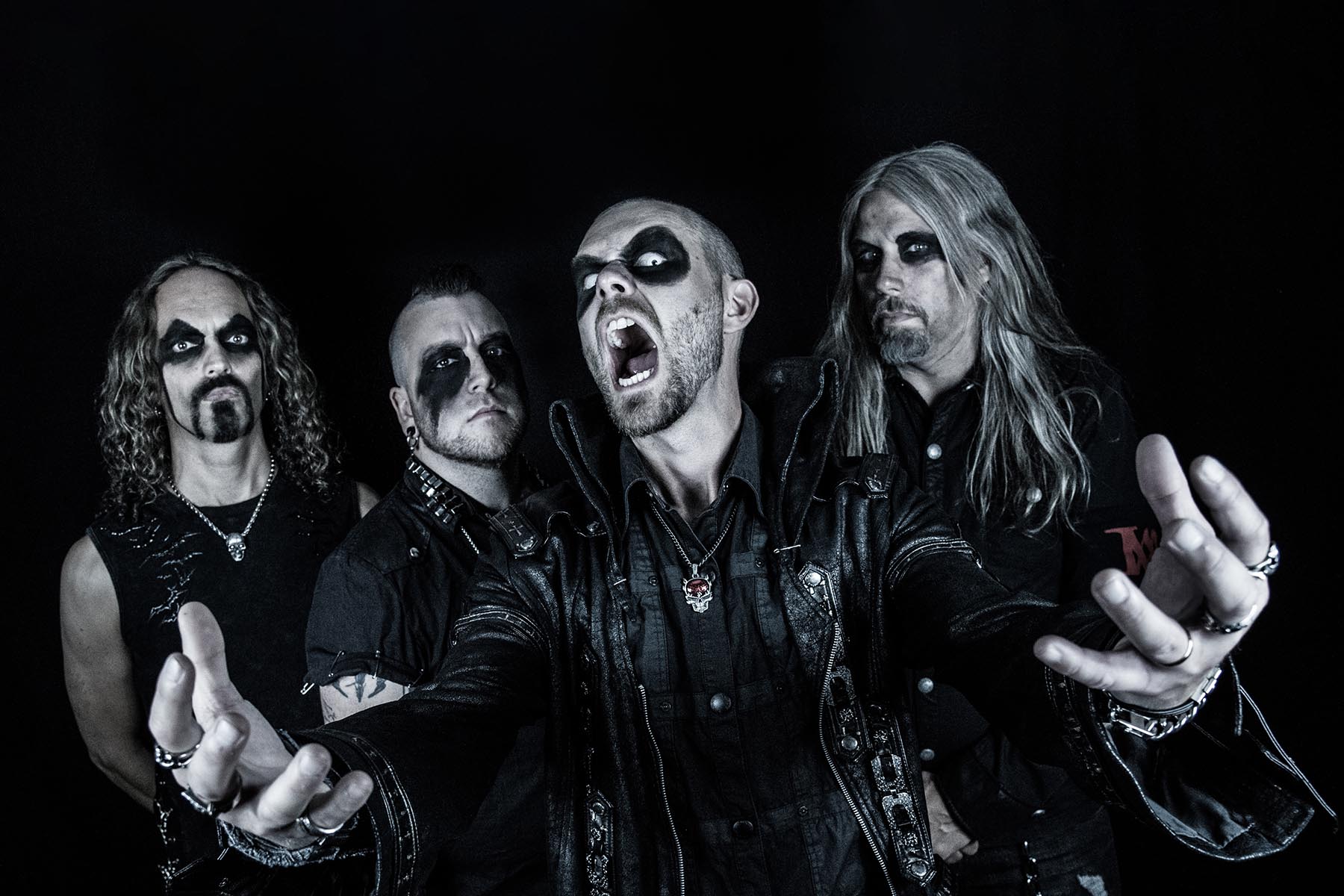 A decade has passed since Sweden’s Manimal unleashed it’s debut album, 2009’s The Darkest Room. It took six more years and some line-up tweaks before the Gothenburg quartet returned with its sophomore beast, Trapped in the Shadows. That album saw band founders, vocalist Samuel Nyman and guitarist Henrik Stenroos, refining the Manimal signature and solidifying the line-up with bassist Kenny Boufadene and drummer André Holmqvist (Ice Age). This month, Manimal unleashed its third masterpiece, Purgatorio and made a long overdue trip to the United States for a debut performance at ProgPower USA.

This week Metal Nation caught up with Nyman while relaxing after a Friday night meal with his family. We discussed the band’s ProgPower debut, the new record, and we took a look back at the 10th anniversary of The Darkest Room.

Tell us about your experience at ProgPower USA this month.

It was absolutely awesome. It was our first time in the United States and it was beyond our expectations. We played as the first band on Friday at 2PM in the afternoon. We thought, if center stage is half full we must be happy with that and satisfied. That would be great if it’s half full. I must say, the place was almost packed. people were crazy, raising their fists and singing along, and clapping along. It was beyond our wildest expectations.”

You played a good mix from all three records including four from Purgatorio. Was it difficult to choose the setlist for this show?

Yes. Because we wanted to play more songs from the new album. We really wanted that. But since the album was released the very same day as ProgPower, you must respect that people want to hear the songs that they have been able to listen to and dig into. So we played the three singles and also added one more song to that and the rest of the set was old songs.

Who were you most excited to see perform at ProgPower?

I wanted to see our friend in Eclipse. I saw them. They always deliver. I had just seen them back home in Gothenburg when they released their latest album. So i wanted to see them again. (laughs) Yeah, I would say our Swedish friends which we know and have played with before, a band like Bloodbound. It’s always entertaining to see those guys. Also I was looking forward to see Sons of Apollo. That was a great experience to get to see all these legends live on stage.Also we were able to watch some of the Doro set. She’s also a legend in the genre, so it’s always fun to see her. She’s got such a great aura when she’s on stage. you can see that she’s still enjoying what she’s doing.”

Nyman talked a bit about the comfort level of having the same line-up for this album as the previous record, as well as the extra contributions by the newer members with Boufadene mixing Purgatorio and producing their music videos, and Holmqvist helping with the lyrical content of the record.

Speaking of lyrical content, I know this isn’t a concept album, but the Dante Alighieri title reference and imagery seem to point toward an underlying theme.

We had no idea of a concept album or a theme going through the whole album, but afterwards when we analyzed some of the songs and the lyrics, it turned out there are some main themes on the album. Even though it’s not maybe one theme, it’s a couple of themes that point in the same direction.I tend to end up writing a lot about mental illness. I’ve done that in the past and I’ve continued that on this record, probably because it’s something that effects us all more or less. If you don’t have it around you in your family, or friends, or working mates, you may come in contact with it through social media when you read about famous people and artists who pass away because of mental illness; they take their lives.So, I think we are all effected in one or another way. I think it’s important to speak about it, therefore my lyrics often tend to point in that direction. Also I can’t deny, when Henrik delivers riffs that are very melancholy and heavy, the first words coming to my mind are not about love and happiness (laughs).”

We dug further into the new album, how their musical influences such as Judas Priest, Queensryche and bands like Helloween, flavor their own sound. We talked about several of the tracks on the new record including the Kamelot inspired title track, and the song that challenged the band the most  and which almost didn’t make the record, “The Fear Within”

That song was the hardest song to write on the whole album,” laughs Samuel. “The bridge and the chorus for that song were the very last thing to be written. It was one of the first songs we started to work with, and Henrik presented the intro–you’ve got this King Diamond inspired intro on the song, and he presented it to me and I added the verse and I had some ideas of a melody and a harmony for the vocals. I had some words for the lyrics as well. But I think we tried maybe 10 different versions of a bridge and a chorus and we didn’t find the right feeling for it. so therefore we just pushed the problem in front of us. We finished all the other songs but we had the other song left. So me and Henrik, we finished the bridge and the chorus while we were recording, but there were times we thought the song would never be finished and we’d have to skip it for the album. At the same time we loved the rest of the song, and we said it’s too good to go in the trash. We have to finish it. I don’t know if it was the pressure we felt in the eleventh hour that made us finally find a solution, but it turned out great.”

We also looked back on the band’s debut album, Nyman’s triumphs and regrets from the record, as well as the songs he still loves to play from it. While it has been edited from the final audio of the interview for brevity, Sam also talked about his hope for a US tour some day, and the problems of visas and financial considerations, as well as the idea of a live DVD/CD set at some point, as Manimal is, above all else, a live band. “We hate the studio,” he laughs. “but we know it’s something we must do.”

You can catch the full interview below as well as the band’s recent videos from Purgatorio, and catch our review of the album here.