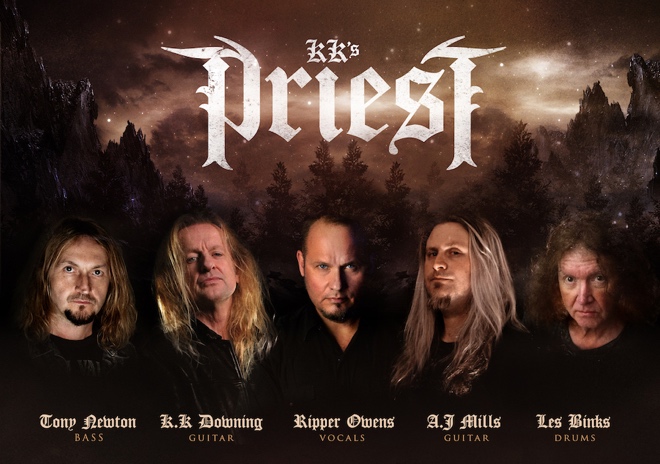 K.K. Downing, founding member of Judas Priest, today announces the name of his new band KK’s PRIEST. This all new band features some very familiar faces. With Downing on guitar, KK’s PRIEST features ex-Judas Priest members Tim “Ripper” Owens on vocals, who fronted the band for eight years and recorded two studio albums, Jugulator, featuring the GRAMMY® nominted track “Bullet Train,” and Demolition, plus two live albums, and Les Binks who was the drummer on the studio albums Stained Class and Killing Machine and the live album Unleashed in the East. They are joined by Tony Newton (Voodoo Six) on bass, and A.J. Mills (Hostile) on guitar. With the line-up complete, KK’s PRIEST is hard at work in the studio creating the band’s debut album which will be released globally by Explorer1 Music Group as a part of the partnership with K.K. Downing signed early 2020. More details to come.

KK’s PRIEST is represented exclusively by Andy Gould for Explorer1, with Jim Morewood handling the band’s global bookings outside the U.S. for the K2 Agency. Extensive touring and festival dates are already being planned with KK’s PRIEST taking to stages around the world to celebrate the 50th Anniversary of Judas Priest and K.K Downing’s career as a founding member. The band will deliver everything that fans would expect of Downing and his ability to deliver up everything that is Priest including newly written metal masterpieces.

“Forging ahead with KK’s PRIEST was not only inevitable, but was essential for me to perform and deliver everything that is expected from me and KK’s PRIEST” says K.K Downing. “Due to the massive demand and overwhelming support from fans around the world, I feel this is where I belong, and a set combining the true, classic songs and sound of Priest, together with great, newly forged metal tracks, is what fans can expect when KK’s PRIEST takes to stages around the world.”

Last summer K.K Downing made his first public appearance in almost 10 years, performing classic Judas Priest cuts at the Bloodstock Open Air Festival in the U.K. In November K.K Downing called on Tim “Ripper” Owens and Les Binks for a surprise, one-off performance, featuring Hostile’s A.J. Mills on guitar and David Ellefson from Megadeth on bass. The band performed a blistering set of classic Judas Priest songs as well as deep album cuts that have never been performed live. With an overwhelming response and the instant chemistry Downing, Owens and Binks shared on stage, KK’s PRIEST was born.

K.K Downing’s genre-defining guitar style helped establish Judas Priest‘s iconic sound and helped propelled them to one of the top Heavy Metal bands of all-time, earning numerous accolades including a GRAMMY® in 2010 for “Best Metal Performance,” a total of five GRAMMY® nominations and multi-platinum and gold releases.