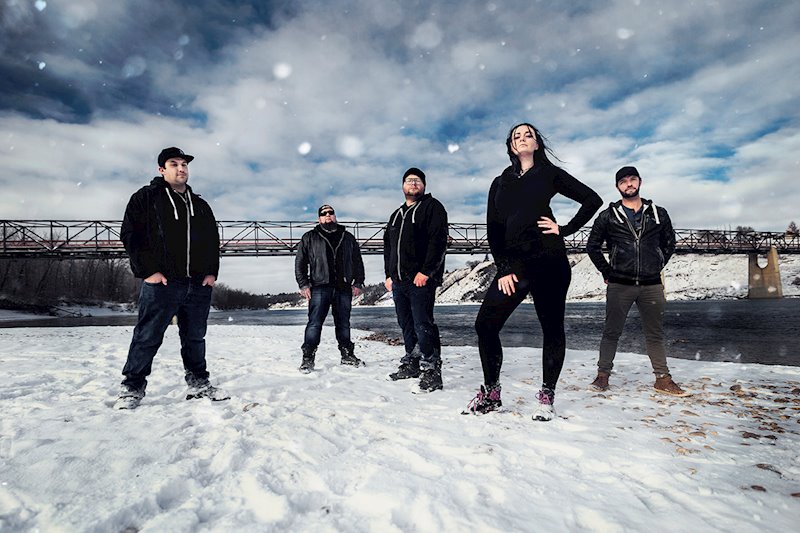 Edmonton’s Juliet Rain has just dropped a new song, “Dark Water” upon the masses. This hot new track featuring a guest guitar solo from their good friend Diego Fernandez (Eye of Horus) is the first look at their next EP of the same title that will arrive in 2021. It’s also the first release from the band since the 2019 album Old Stardust, Love and Chaos. According to the band, this upcoming EP represents a step into a heavier domain continuing on with the low-tuned guitars.

“‘Dark Water’ is the debut single and title track off Juliet Ruin’s newest EP. Showcasing the band’s slightly different direction making the move from three vocalists to one with Jess Ruin fully taking over vocals. ‘Dark Water’ is upbeat, haunting, hopeful, and uplifting, setting the tone for what else the band has in store.”

Take a listen here on YouTube (lyric video) or on Spotify.

Juliet Ruin has created a listening experience that is definitively hard-edged, but catchy with lyrics you can shout in anger and also it leans positive on message. Overall, the band’s sound has evolved into heavier territory yet again. Completely switching to the lower tuned guitars, this EP does not have any backing vocalists on it as the previous efforts have, thanks to the massive improvements Jess Ruin has made in her harsh vocal techniques.

Juliet Ruin is recommended for anyone who enjoys heavy and melodic metal with powerful vocals, especially those who already have The Agonist, Jinjer, and Killswitch Engage in rotation.

Juliet Ruin was formed in 2015 from the ashes of previous project Fiction of Fate with the desire to fuse metal sound with clean technical vocal stylings in a way that is both beautiful and beastly.

Juliet Ruin took the obligatory first step with their debut self-titled EP in 2017 and quickly made their way through the local scene, captivating audiences with high energy interactions that evoke emotion, vulnerability and power over various local gigs and appearing at several festivals over their flourishing career.

The next exciting step for Juliet Ruin was the release of their first full-length album Old Stardust, Love and Chaos in 2019 that showcased more technical and heavy instrumentation, including some dabbling in low tuned 7 string guitars. The lead vocals also on that release increased in volume of screams and clean techniques with complimented pop-esque power vocals.

Fast-forwarding to 2020, the age of Covid, things have been tough, no touring, no fans to perform in front of, but not seeing it as a lost cause, Juliet Ruin came together to do what they do best, uniting their love for the music and writing new bangers for current fans and new ones to come. Juliet Ruin is very excited to be kicking off 2021 with a new EP Dark Water with the first single off the record out now