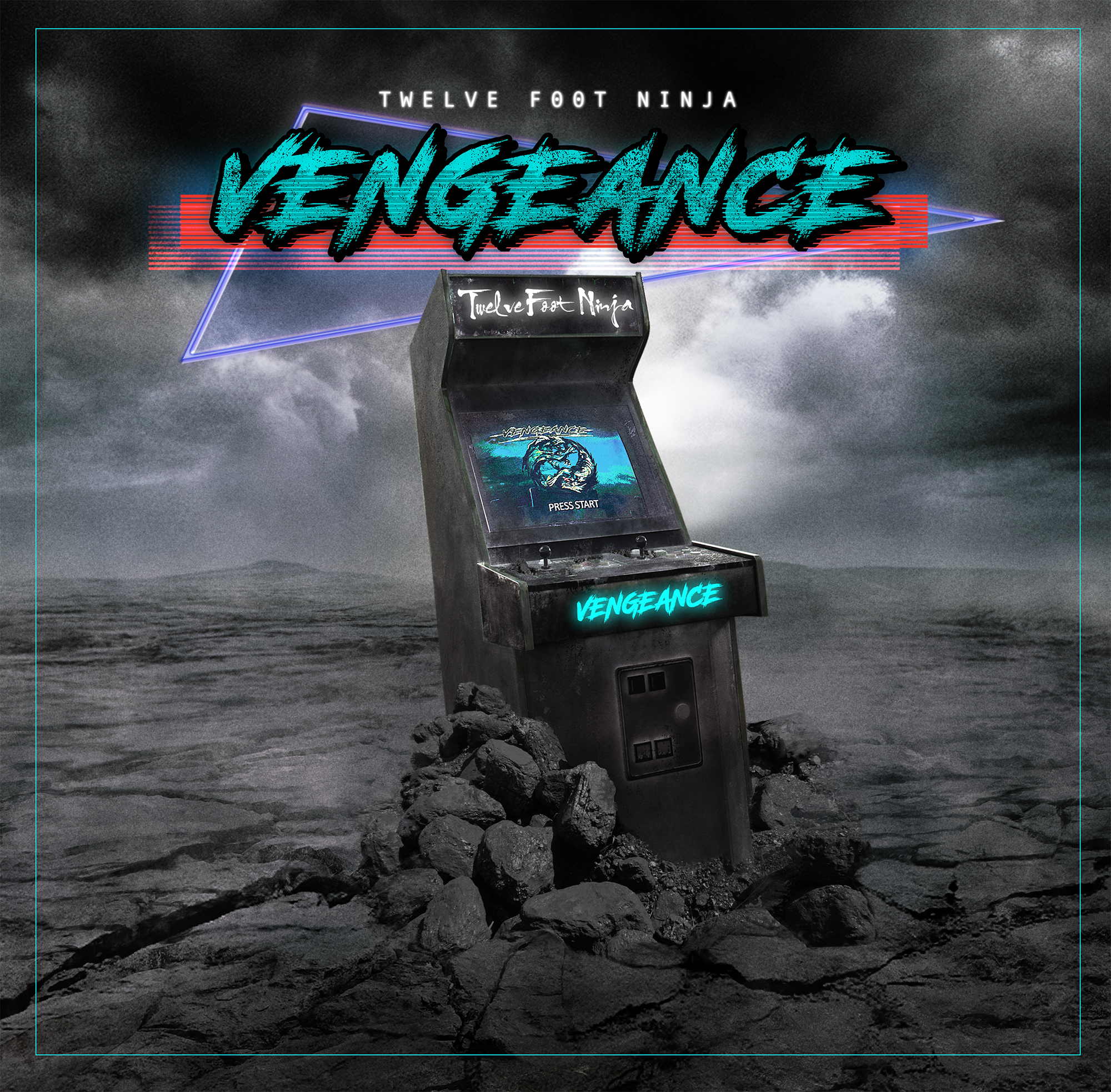 Start the fire!!! Twelve Foot Ninja has done it again with their third album release, Vengeance coming out October 15th, 2021. These zany Australians have created an experience that is quite unlike any other. Their marketing tactics are incredibly creative and their musical genius is comparable to a Mr. Bungle-esque meets a djent-like suitor, with the result of an ingenuity baby of epic proportions. Vengeance is a continuation of innovative wizardry with highlights of 80’s synth wave soundscapes and trickster interruptions of melodic changes throughout the entire album. I could not be more pleased with this vibrant direction.

These eccentric performers began their fusion of musical elements in 2008 right out of Melbourne, Australia. Nik “Kin Etik” Barker (vocals), Steve “Stevic” MacKay (lead guitar), Shane “Russ” Russell (drums), and Rohan “Ro” Hayes (rhythm guitar, backing vocals) are the magicians behind the music and the possessors of our souls. They have integrated many styles of music in their first two album releases, Silent Machine in 2012, and Outlier in 2016, but have inspired a path to the past with Vengeance by including those 80’s synth accents.

The first time I heard Twelve Foot Ninja, to say I was blown away, would be an understatement. Not only was I heavily overcome with their styles, their merges of genres, and inventive musical twists, I was blown away by their comedic videos and their quirky personalities. I had instantly become a big fan. When I saw the direction of Vengeance, I was apprehensive, mostly due to my lack of interest in 80’s synth-style music, but I was immediately put at ease with track one and completely overwhelmed by track 10. I don’t do 1 out of 10 ratings, but if I did, this would be an 11.

Starting from the beginning is song, “Start the Fire”, which has been one of their released singles. A Tibetan kangling howls as a video game soundscape enters before you are blasted with Kin’s vocal scream, “Start the Fire!” As if a human femur instrument isn’t unnerving enough, but their video shows a creepy story of attempting to turn humans immortal through technology to save themselves, what a trip. Track “Long Way Home” is my son’s absolute favorite and is another released single with a bizarre yet highly entertaining video. Their videos are one of the many things that make them unique. This song is an adventure in itself. You won’t want to “wiggle” away from this one, see what I did there? My favorite part, is where you think it is the end of the song, then it hits right back into the same melodies with a heavier influx. So great.

Self-Titled “Vengeance” comes in at number 3 on the album and punches with a peculiar electronic bass and a fuzz-like uptick through synth guitars. It is a crazy sound that is difficult to explain, but extremely catchy. There are some robotic vocals incorporated a little over halfway through followed by some intense yells that flow perfectly. Kin’s range is something really amazing.

“IDK” is one of my favorites, if I had to pick. This one is really off the wall with some great jazz elements, pop-style choruses, and remarkably facetious lyrics. Then when you think it can’t get any more outrageous, it switches to a tropical soundscape before edging back into aggressiveness. Outrageous. “Shock the System” is marvelous too. It begins with some synth and more robotic vocals and manifests to regular vocals before navigating to a catchy chorus. My absolute favorite part of this track is when Kin transitions to an almost Jack Skellington sounding narration while Tango music plays in the background. It is an astonishing change, but very appealing and I look forward to hearing it every time I play this album.

“Gone” has another video game style starts with some funky jazzish elements all throughout. This one is the most “basic”, if you can possibly use that word with this album at all, or even this band at all. It is still great and not by any means a skipper. “Culture War” was my first favorite with my initial listen. It is heavy and aggressive, yet still extraordinary with variations. The guitar riffs really stand out as the vocals take on a more harsh approach. It softens a bit in the chorus, but continues the melody. These other musicians really shine with Russell taking the front line with his drumming style. Two minutes in, it goes into a Spanish-style rhythm and soundscape, which is alarming at first, but fits flawlessly. After this, MacKay kills a small solo and then those djenty licks hammer back in, Hayes and MacKay, what a match.

“Dead End” has some interesting sounds in the beginning before the guitars jump in. As an introvert, I identify with the lyrics, “I’m running, I’m running, I’m running. I’ve got to get out of here!” I hear a lot of Patton-like vocals in this song. Kin, as I mentioned before, has an incredible range that really is reminiscent of Mike Patton. Over three minutes in, there is a slower synth sound that reminds me of an 80’s romantic comedy, not sure why, but that’s where my head goes every time. “Over and Out”, no doubt, most have heard this single since it is featuring the insanely talented Tatiana Shmayluk from Jinjer. What a collaboration!! I really hope these two hook up again, because they complement each other exquisitely. The head nod to 80’s movie Big, is one of the best things about the outlandish video.

The album ends with “Tangled”, and it is perfect. This one ballad-like song, is beautiful and one that plays in my head constantly. Simple, elegant, melodious, magnificent. An acoustic guitar plays throughout with an alluring soundscape. I feel like fairies are dancing around me while I listen. It is so appropriate as the ending of this masterpiece of an album.

Vengeance is a treasure. It is a brilliant journey through many musical genres mixed masterfully by some of the best metal has to offer. Not only is the album unblemished, but the marketing with Vengeance is genius. There is a novel titled, “The Wyvern and the Wolf”, written by Nicholas Snelling, which involves a character Stevic developed many moons ago, the twelve-foot ninja. They also have a graphic novel available that was written by Stevic titled, “Vengeance”. Make sure you hop on their website and see all they have to offer! These creative Aussies are constantly coming out with new and inventive ideas, so sign up for updates while you are there!