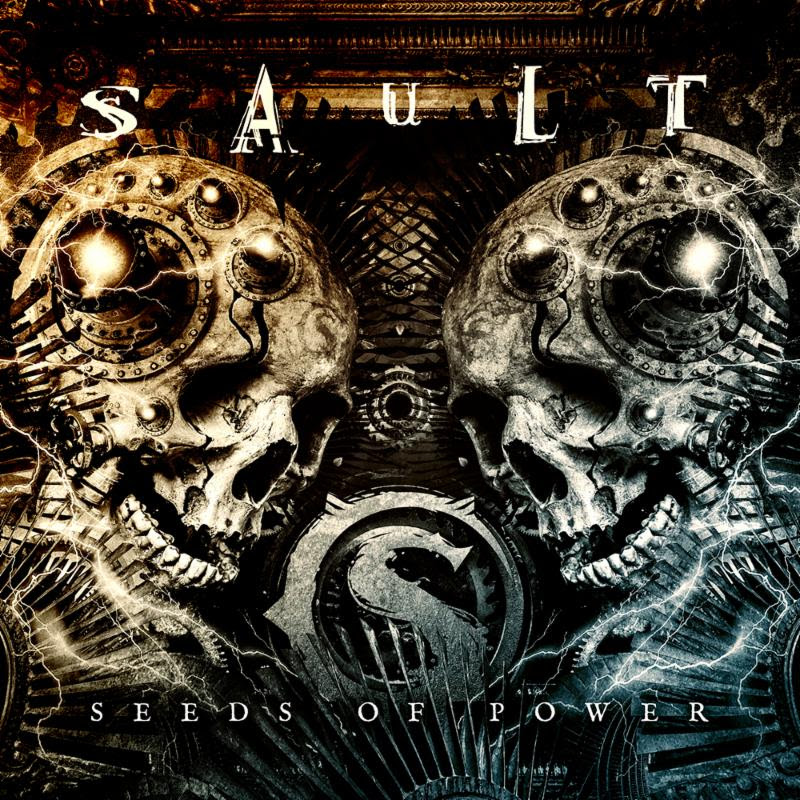 When word surfaced that Kamelot bassist Sean C. Tibbetts had another project in the works, fans began to speculate on what direction the music might take. The original thought process behind the project stemmed from Tibbett’s desire to create a solo record. Fortuitously, that plan continued to evolve as he met guitarist Curtis Jay and vocalist Benjamin Riggs (Arcanium). What began as a solo project blossomed into Sault.

Tibbetts tapped his former rhythmic partner-in-crime, Casey Grillo, to man the kit, and Sault‘s initial recordings sent an immediate buzz through the metal community. Tracks like “Adonai” and “Save Yourself” showcased a combination of post grunge melding with progressive groove metal elements. The band also added King Diamond drummer Matt Thompson to the mix, who lends his deft talents on half of the songs that made the debut album’s final cut. Sault has been a long time in its development but three-plus years later, the Seeds of Power have been sewn.

Tibbett’s signature bass style resonates throughout Seeds of Power as might be expected, and he talents set the table on the intriguing album opener, “Balance.” The track plays out with a hint of a Rage Against the Tool vibe, backstopping a somewhat dystopian, spoken word intro.

Sault wastes no time jumping into its groove-heavy deep end on the serpentine twisting cut, “Guilt.” Jay serves up some fantastic spiraling fretwork, and Riggs delivers with an edgy and melodic snarl. The album’s first single, and perhaps the most radio accessible track on the album is the aforementioned, “Adonai.” Riggs showcases a balance between his biting attack and a smoother, moodier quality. The song packs a punch with its huge, hooky chorus, and Jay’s solo has an Arabian feel to its flow. Both tracks feature Grillo handling the drum work.

Thompson takes over behind the kit as the band amps up the tension on “Entropy”. The song features some nice cameo backgrounds from One-Eyed Doll’s Kimberly Freeman. This is followed by the grunge-tinted acrimony of “Fragile,” which is a darker, slightly dramatic track.

“Peaceful Moment” is decidedly energetic as Tibbett’s bass and Grillo’s drums add bounce and rumble. Rigg’s voice aims for the clouds and he hits those high notes flawlessly. Jay adds some fantastic fretwork down the stretch. “Save Yourself” taps into the ethos of Alice in Chains with a touch of Stone Temple Pilots in the under current.

Sault amps of the heaviness and groove for “Last man Standing.” Rigg’s raspy voice adds to the gut-punch aggression of the track.

The album closes out with the guitar-centric groove of “Null Space” and the beautiful tranquility of the instrumental, “Broken Tongue”. The latter brings the album full circle to Tibbett’s initial seeds of inspiration to create a record based around his bass, before it all blossomed into something larger.

While there is noticeable complexity and diversity on Seeds of Power yet Sault also manage to capture a raw, organic feel that is quite appealing in this era of over-production and homogenized banality. Tibbett’s has showcased another side to his creativity while also exposing us to exciting new talent’s in Riggs and Jay. Seeds of Power has the feel of shadows and earthiness, yet there is hope resonating within. The seeds have been planted.

Album Review: AGAINST EVIL – All Hail The King