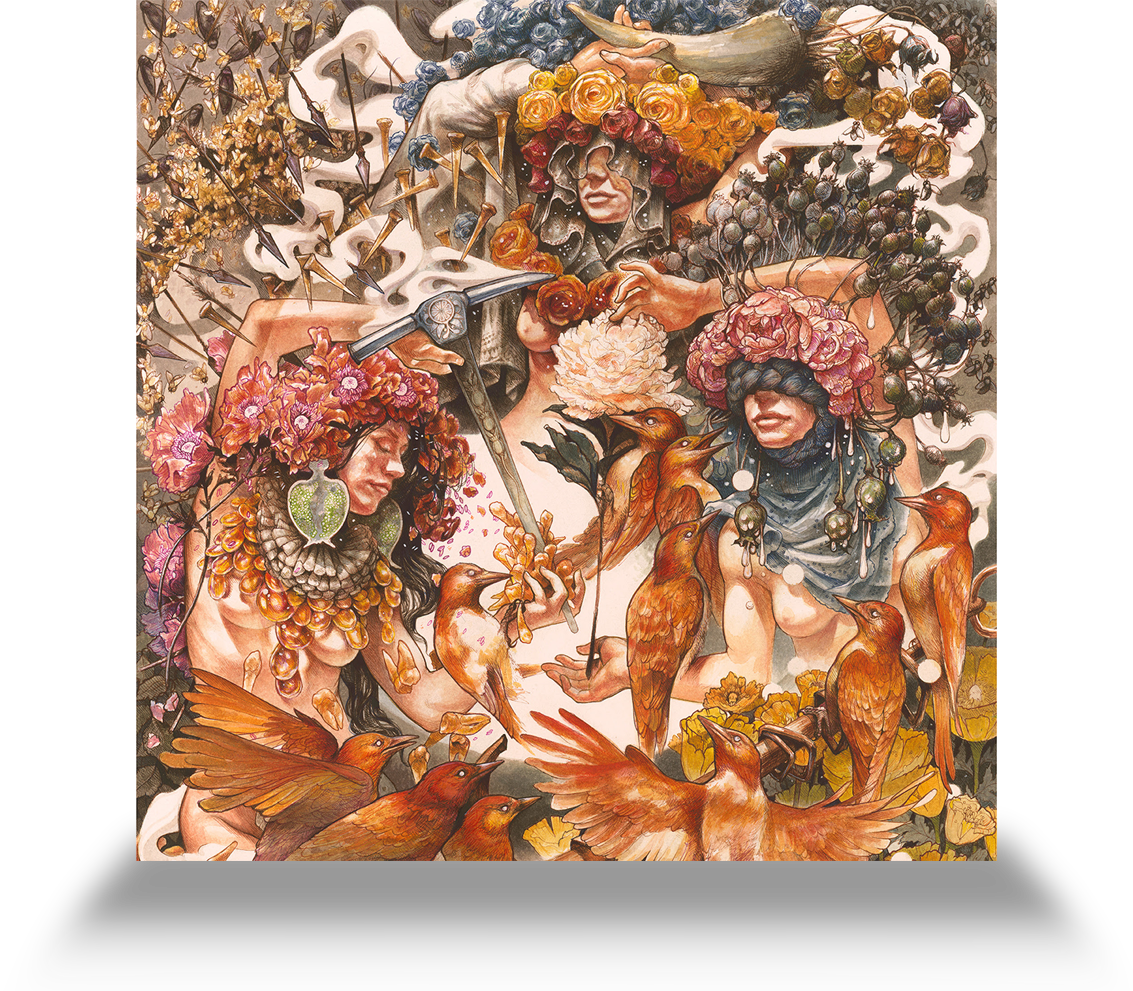 I want to make one thing perfectly clear right here at the start.  Baroness is one of a very small handful of bands with whose music I feel an almost inexplicably deep personal connection.  I’m not sure I could properly articulate exactly how this came to be, but being that I discovered Baroness during the formative years of my shift towards the more artful and substantive end of the musical spectrum–which is just a nice way of saying “the time when I really started being an annoying snob about music”–I think it’s safe to say that my affection for this band boils down to the simple fact that at a time when I needed something new and challenging and different, Baroness answered the bell and have continued to do so across the years.  I only mention this because I want to make it perfectly clear that while I regard this band on a level that makes honest critical analysis difficult–if not impossible altogether–I also have ridiculously high expectations every time a new Baroness record rolls around.  It’s a bit of a precarious place to be honestly–relishing the enduring greatness of one of your heroes while also remaining keenly aware of the fact that one day they’ll likely miss the mark, as all the greats inevitably do. But today is not that day.

Gold & Grey is the 5th (and final) in a series of albums which take their titles from the 7 primary colors, beginning with Red Album (2007) and progressing through Blue Record (2009), the double album Yellow & Green (2012), and Purple (2015).  Given the naming scheme and stylistic similarities of each album’s cover–all of which are paintings created by frontman John Baizley–one could be forgiven for assuming that the albums exist inside well defined sonic boundaries. And while that is definitely true in a very basic sense, Baroness has always demonstrated a proclivity for executing dramatic stylistic changes from one record to the next.

Part of the reason this is true is likely due to the fact that Baroness has undergone numerous roster changes over the years.  Outside of Baizley–who is and always has been the chief creative force behind the band–Baroness has been a bit of a revolving door of players and with the exception of their early EP’s, has never featured the same line-up across consecutive albums.  I don’t mean to imply that constant line-up changes are a good thing, because most of the time they are not, but in the case of Baroness it seems to have worked in their favor as each album has invariably taken on the unique personalities of those involved.

This time around, however, I will fully admit that I had my doubts as to Baroness’ ability to recover from their most recent line-up change, which saw long-time lead guitarist Pete Adams step away to focus on other priorities before the writing and recording of Gold & Grey.  His presence, particularly on stage, seemed to be an irreplaceable component to the band’s essence. Into his shoes steps Gina Gleason, and while it’s tough to tell exactly how she influenced the various twists and turns Baroness take here it’s not because her contributions feel muted, it’s because this album is so wildly different than anything the band has done to this point. 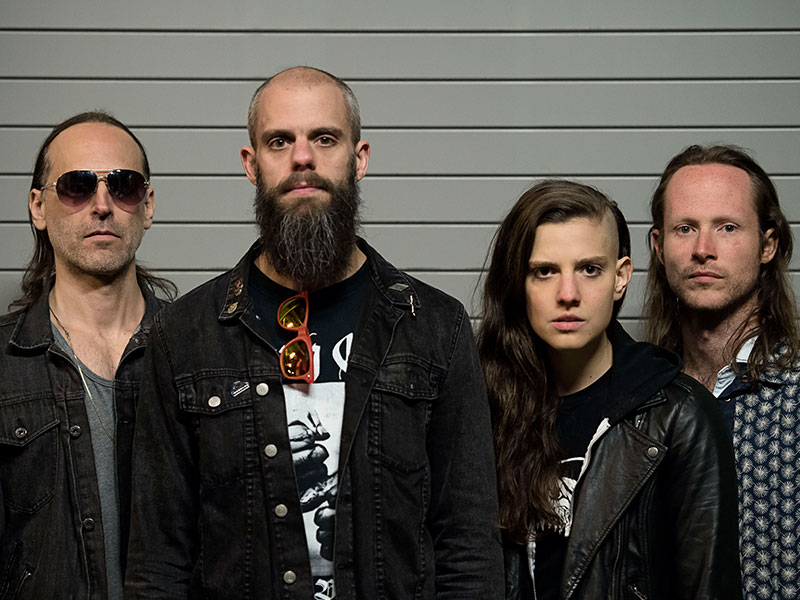 Artifacts of past records remain, no doubt, particularly on tracks such as the album’s opener “Front Towards Enemy” with its muscular riffs and twin guitar solo, or the crushing middle section of “Seasons”, but elsewhere the album is a glorious grab-bag of unexpected and peculiar delights.  “I’m Already Gone” features–hands down–one of the best melodies Baroness has ever written,  bathed in lush yet cacophonous instrumentation, while “Borderlines” gives ample room for the band to explore their psychedelic tendencies. And I’m not even going to try and describe “Tourniquet” other than to say it’s fucking glorious.  Pardon my crass, reductive language, but that’s just honestly how I feel about it.

But let’s go back to the topic of instrumentation for a moment.  Gold & Grey is really the first album from Baroness where it very much feels like their sound isn’t beholden to the notion of being guitar dominant, but not at the expense of having awesome guitar parts–if that makes any sense at all.  Gold & Grey has the riffs–they are plentiful, and they satisfy–but the undeniable star of the show in my mind is the rhythm section consisting of drummer Sebastian Thomson and bassist/keyboardist Nick Jost. These two are absolutely unhinged on Gold & Grey, and Baizley was wise to indulge their creative energy because it feels like their confidence as contributors is the primary reason this album sounds the way it does.  They sounded good on Purple–great even–but nothing I heard on that album prepared me for the kind of awesome shit they drop all over Gold & Grey. Gleason, for her part, is clearly a capable guitarist–having demonstrated her chops on numerous live dates prior to the album’s release–and while it’s impossible to know which guitar parts she plays on which songs, Gold & Grey exudes a textural depth that no other album in their discography even remotely approaches, which I highly doubt is a coincidence.  And there’s no way you could come away from a listen to tracks like “I’d Do Anything” or “Cold Blooded Angels” without feeling like Gleason is, and will be, an integral part of the next-gen Baroness sound.

There’s not really anything left for me to say here other than to declare that it is firmly my opinion that Gold & Grey is a stunning work of art and the crown jewel in the Baroness catalogue to this point.  I realize that’s saying a lot for a band whose body of work would rank very high amongst their peers even if they’d never made this record, but I believe it to be true. Red & Blue will always be untouchable in ways that are wholly unique to that period of time for the band, and I’ll always cherish the exploratory turns they took on Yellow & Green followed by the cathartic triumph of Purple.  But Gold & Grey is simply in a league of its own. It feels like an amalgamation of everything that brought them here, but also a fearless leap forward into unexplored sonic realms. And at a point in their lifespan when lesser bands would have already passed their creative peak, Baroness sound like they still have a hell of a lot left to say.