Rocky Mountains-based outdoor metal gathering FIRE IN THE MOUNTAINS has expanded beyond its DIY roots into an official two-day event this summer, this week announcing the first wave of bands including Panopticon, Wayfarer and Aerial Ruin

FIRE IN THE MOUNTAINS is a one of a kind event, taking place in front of the Rocky Mountains’ crowning jewel, the Grand Tetons just outside of Jackson, Wyoming.

Getting its start as a rogue one-off show in the wilderness, the festival is now a two-day event showcasing the live performances of some carefully curated bands performing on an outdoor stage directly in front of the Tetons, as the sun sets behind them. It is two days of music, art, and revelry nestled deep in the beauty of nature, providing an escape from the trappings and monotony of modern civilization both through the music on display and through the beauty and isolation the atmosphere uniquely provides.

The event takes place June 30th and July 1st at Heart Six Ranch in Moran, Wyoming, where attendees will watch two nights of more than ten bands on the outdoor stage, eat, drink, and camp within the ranch and nearby in Bridger-Teton National Forest. They will also have access to festival sponsored hiking trips, white water rafting, backpacking, fishing, canoeing horseback rides, and more wilderness activities right out the backdoor of the ranch in the daytime hours surrounding the evenings’ performances.

With more bands to be announced in the coming weeks, the first three acts for FIRE IN THE MOUNTAINS 2018 have been announced.

Panopticon, the rarely-seen-live, folk informed American black metal powerhouse spearheaded by Austin Lunn and based out of Minneapolis, Minnesota. Coming out for a rare performance in a beautiful atmosphere, Panopticon brings an unforgettable array of heart and music to the environment of the festival as one of the leading torch bearers in the modern climate of blackened metal in the United States. Their music retains a genuine feel, blending their strong melodic metal riffing with the folk music of their own ilk.

Check out the title track from Panopticon’s 2015 release Autumn Eternal below:

Wayfarer, from Denver, Colorado, will be returning to Jackson for the now legitimate festival; coming in strongly off the heels of their Profound Lore Records debut, World’s Blood, (May 25 release) which paints a grandiose, powerful and haunting image of the American West through a fierce and heavy lens. The band will be storming the stage with their raw and visceral live performance in the Tetons as an ode to the Rocky Mountains they hail from.

Check out Wayfarer’s single ‘Catch’ from their 2016 album Old Souls below:

Aerial Ruin, a one-man (Erik Moggridge) neo-folk experience calling its home in Portland Oregon. Aerial Ruin spins haunting folk songs that are bare and true, with a fantastically dark sense of musicality. Having recently collaborated with Bell Witch extensively on their acclaimed Mirror Reaper album, Aerial Ruin will be performing his captivating songs before the Tetons, fresh off an appearance at the Netherlands’ Roadburn.

Many other bands will be announced in the following days, with some strong surprises fleshing out an impressive lineup of powerful acts. The lineup and other information can be found on the festival’s Facebook, with an Instagram and official website to launch with ticket sales in early April. 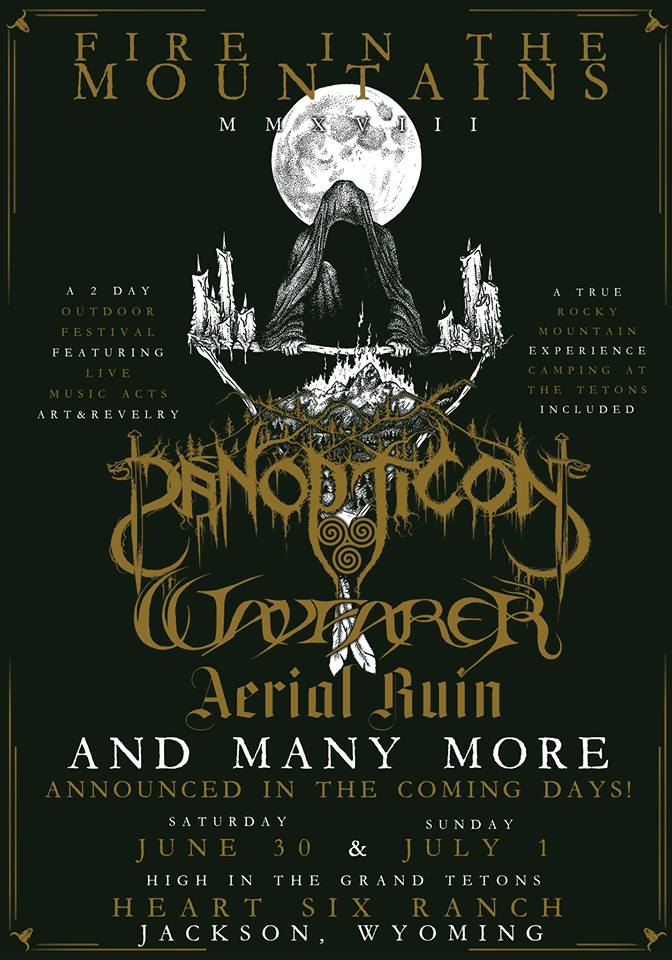 For more information and updates for FIRE IN THE MOUNTAINS, please visit: