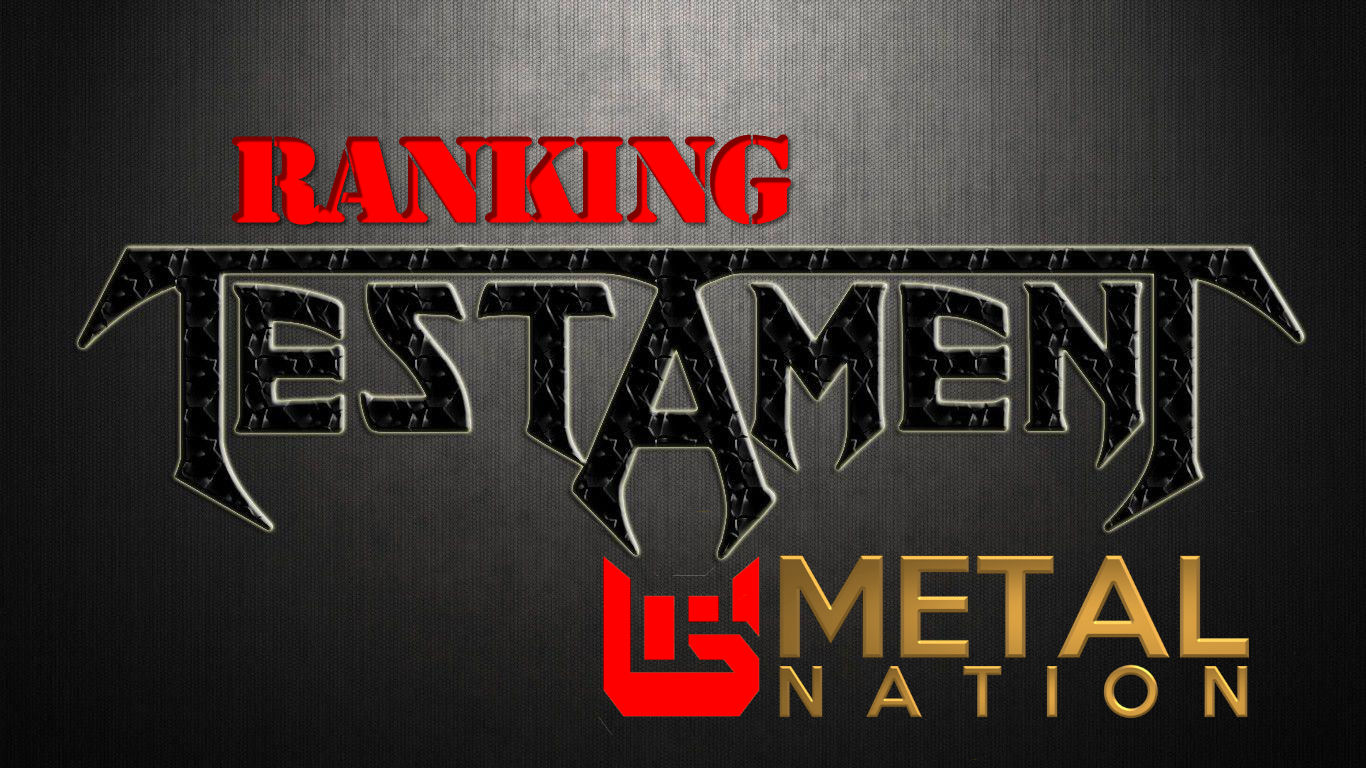 Earlier this year veteran Bay Area thrash masters Testament released their 12th studio album titled Titans of Creation. Surely this album will end up toward the top of many lists at the end of the year, but now that we’ve been able to digest these songs for a few months it’s time to see how it stacks up against the rest of their discography. In reality, Testament has always maintained a degree of quality control, and for that reason they don’t have any “bad” albums. That being said, this list isn’t so much a “worst to best” ranking, but more of a “least good to best.”  So here goes… 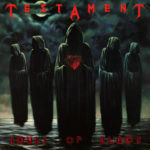 In this writer’s not-so-humble opinion, this is easily Testament’s “worst” album. While there are some cool songs, I think this album could be cut down to a strong EP. The album starts off strong with the flamenco acoustic piece that is “Beginning of the End” and tears right into “Face In the Sky,” so at first it seems as if Testament is still in top form. Unfortunately, things sort of falter as the album progresses into what seems to be a bit of a predictable, paint-by-numbers thrash album. The whole mid-section of the record is nothing truly gripping. I’ve never met any Testament fan online or in the real world who would cite songs like “Love to Hate” or “Malpractice” as an underrated gem in the band’s repertoire. Even by the band’s own admissions this one was a bit under-cooked, so in comparison to the rest of their catalog it has difficulty holding up. The album does feature the band’s seminal line-up of vocalist Chuck Billy, drummer Louie Clemente, bassist Greg Christian, and guitarists Erik Peterson and Alex Skolnick. 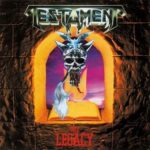 Testament’s debut album. In all honesty, this album is basically interchangeable with Souls of Black as far as holding the bottom slot. While I’m sure this album holds a lot of fond memories for the band and the people who lived it alongside them in the 80’s, the fact is that this is a band in its infancy. Songs like “Over the Wall,” “First Strike Is Deadly,” and “Alone In the Dark” are classic thrash tunes that still get some rotation in the band’s live set, but the other side is that this is a group that had yet to realize its potential. They would go on to produce much better material, and with extremely dated production it makes it difficult to truly enjoy this record without a sense of nostalgia for the time. However, because it is a first effort and that does provide a sense of nostalgia and raw, youthful naivety it inches slightly above Souls of Black. 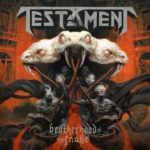 Putting Brotherhood of the Snake this far down on the list might piss a few people off, and it pains me to do so because I had really high hopes for this record, but I just don’t find a lot of material here worth revisiting. This album is a lot like Souls of Black in that it starts off really strong, but starts to dip down toward the middle of the album and by the end just seems like it’s dragging on with material that seems kind of “been there, done that.” Echoing the same kind of problem with Souls of Black, I feel like this album could trim the fat and turn itself into a fuckin’ killer EP, but feels bloated as a full-length. Despite Chuck Billy’s voice being in deadly shape, songs like “Black Jack” and “Canna-Business” have some straight-up cheesy lyrics. On a more positive note Chuck’s voice is fucking awesome, and the lead guitar work is top-notch. Brotherhood of the Snake has all the right parts to be one of their best albums, but is configured in a way that it doesn’t seem to connect like one might hope. 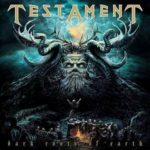 Dark Roots of Earth is a good Testament album. All the songs are cool, classic Testament style, but at the same time none of them seem to really stand out as mandatory listening, with maybe the exception being “Throne of Thorns,” which has vibe similar to the music on Demonic. Testament are often guilty of front-loading their albums with the best songs on Side A and very few surprises on Side B, but this is one of the only times the band buried one of the best songs on the backside of the album.  Again, none of the songs are bad, but there’s not a lot of exploration either. I don’t think there’s a single song on this record that I would show to someone first discovering the band as a way to entice them to listen further. The band obviously knows what they’re doing and what their fans look for in a Testament record, but it seems like a lot of it is on auto-pilot. However, this album has probably the best cover artwork in their whole discography, so that’s… something. 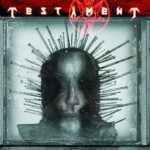 Testament’s seventh studio album is a bit of an anomaly and shows the band in a strong-but-awkward transition phase. Released in 1997, the band was caught in that mid-90’s struggle where heavy metal was considered to be on it’s death bed. The group is trying to retain its thrash roots while progressing into the more modern groove-laden death metal influence displayed on 1994’s Low. On the downside, the band was at a financial low-point having just come out of their major label dealings with Atlantic Records, and this is the first album to not feature original bassist Greg Christian. Guitarist James Murphy (Death, Obituary), who had replaced Skolnick for two albums in the mid-90s, had also exited the band, leaving Eric Peterson handling basically all of the guitar duties himself. On the upside, this was the first Testament album to feature Gene “The Atomic Clock” Hoglan on drums. I think this album is overall quite underrated among Testament fans, which generally comes from people saying they weren’t a fan of how Chuck Billy leaned into the death metal vocal style so hard on this album. However, some of the songs here are Testament at their heaviest! “Demonic Refusal,” “Together As One,” “Jun-Jun,” “Hatred’s Rise,” and “New Eyes of Old” are all killer songs. If you listen closely, you can hear how Randy Blythe of Lamb of God drew a lot of his sound from what Chuck did here. It’s a very unique record, to say the least. I actually have to set a personal preference aside in order to rank this album in the middle of their discography, because it’s actually one of my favorites and I really want to put it higher on the list, but personal love aside, I must admit that it is not Testament at their most powerful. 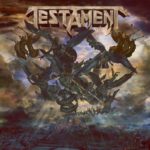 The early 2000’s marked a long stretch of inactivity and difficult times for Testament as it took nearly a decade for the band to release any new material following 1999’s The Gathering. Besides the 2001 re-recordings of select tracks from their first two albums represented on First Strike Still Deadly and a somewhat shaky reunion of the original lineup on 2005’s Live In London, the band was barely hanging on for dear life. It was during these years that Chuck Billy had been diagnosed with cancer and Eric Peterson was staring down the possibility of closing the book on Testament. At one point Eric admitted that if guitarist Alex Skolnick had been unwilling to return to the fold, that would have officially marked the end of the group. During this time, Peterson was also exploring a more symphonic black metal infused sound with Dragonlord, recruiting some of the same members that appeared on The Gathering.

Fortunately Testament’s story didn’t end there, and the band attempted a second reunion with Alex and original bassist Greg Christian. This time however, original drummer Louie Clemente was left out of the fold in favor of Gene Hoglan, for what are probably obvious reasons to anyone with ears.  The Formation of Damnation was one of the most highly-anticipated albums of the year, so expectations were very high. For the most part, those expectations were met. It’s a very strong album supported on the strength of the first single “More Than Meets The Eye,” (possibly the best Transformers-themed metal song of all-time). It also included some memorable deep cuts such as “Henchmen Ride,” “Killing Season,” and “F.E.A.R.” Not to forget the album closer,  “Leave Me Forever,” that included a bass groove and riff style that would’ve fit right in on Low.