Australian metal band Parkway Drive will release a documentary film entitled Viva The Underdogs. The film will be shown in Australian cinemas on January 22. More information on other territories to follow.

“We have always taken pride in doing things our way,” says vocalist Winston McCall. “For over fifteen years we have stayed true to ourselves in a world of extremes. We are not the story of shooting star super stardom, we are not the overnight breakout success, we will never be viral and we sure as hell won’t break the internet. But we have a vision, and we have lived for it, worked for it, bled for it, grown for it and broken for it. We have sacrificed everything and compromised nothing. This is an honest insight into what it takes to survive as the underdogs. Thank you for being part of the story”

Viva The Underdogs features over a decade of behind the scenes personal footage, coupled with unprecedented access to the bands most explosive live tours and world’s biggest music festivals. The film gives an incredibly honest and candid look at Parkway Drive’s journey; the good-times, battles, triumphs, and sacrifices.

Watch the trailer below: 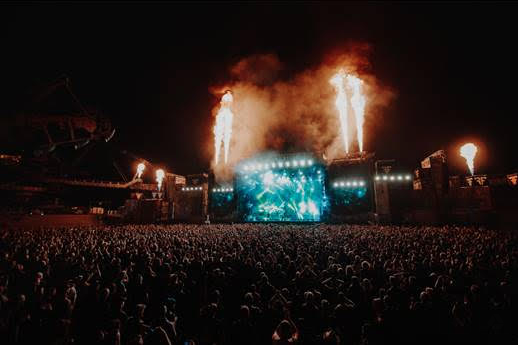 Parkway Drive will be back in Europe and UK for the spectacular ‘Viva The Underdogs – European Revolution 2020’ Arena Tour in April 2020.

The tour will kick off on April 1st in Hamburg’s Sporthalle and conclude at the legendary SSE Arena Wembley in London on April 18th.  Please see below for the full list of dates.

The five-piece metal band from Byron Bay, Australia formed in 2002. The band features vocalist Winston McCall, guitarists Luke Kilpatrick and Jeff Ling, bassist Jia O’Connor, and drummer Ben Gordon. For more than a decade, the band has stood at the forefront of heavy music worldwide, matching their uncompromising urgency with a powerful musicality. Parkway Drive has released six studio albums, all on Epitaph: Killing with a Smile (2005), Horizons (2007), Deep Blue (2010), Atlas (2012), IRE (2015), and Reverence (2018). With Deep Blue, Atlas, and Ire all achieving gold status in Australia. The band has also released two platinum-selling DVDs, one EP, and one book.

Reverence, produced by longtime Parkway Drive sound engineer George Hadjichristou, is the band’s most sonically adventurous album and their most personal album to date. With its barrage of heart-shredding anthems, the album was closely informed by a series of tragedies the band had endured over the past few years. Reverence debuted in the US at #2 Current Hard Music, #34 Billboard Top 200 and #2 Current Rock Albums. The album debuted #1 in Australia and won the 2018 ARIA Award for Best Hard Rock/Heavy Metal Album. The album also charted globally; Germany #3, Switzerland #3, Austria #5, Belgium #6, UK #14.