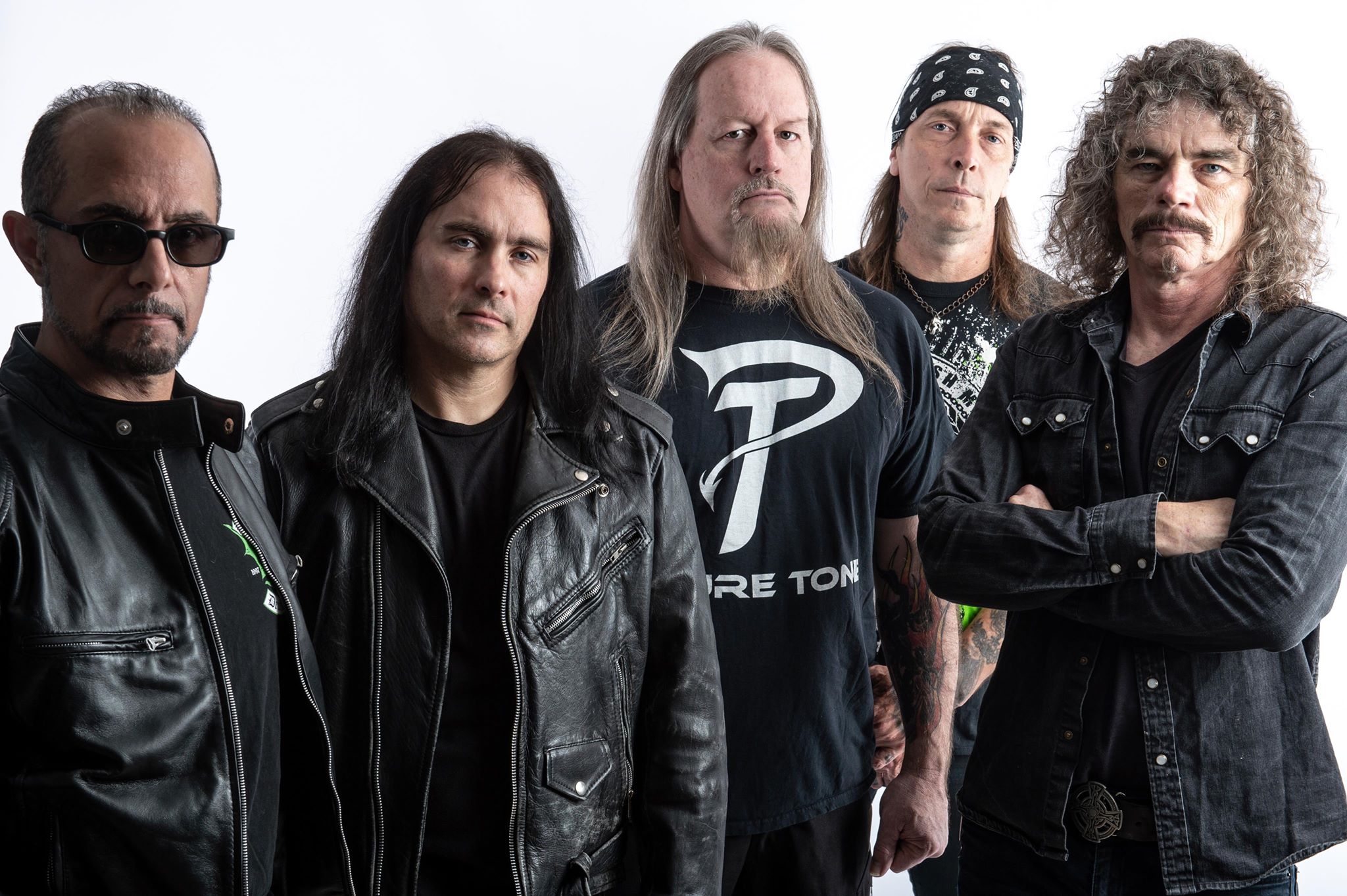 Overkill is Batman. Dark, aggressive, and dangerous. They have no lofty superpowers. They can’t fly. They don’t sell out massive arenas, or have hit songs blowing up the airwaves. They just serve up good old blue-collar, kick your ass heavy metal heroism. It doesn’t matter how much the metal scene changes, Overkill is always cool. Year by year, decade by decade, album by album–Overkill is fucking Batman!

On February 22nd, Overkill will drop its 19th studio album, The Wings of War. The latest album is one of the quintet’s strongest in years, and marks a slightly new shift for a group that has remained as consistent and relevant as any metal fan could hope for. Following on the heels of Overkill’s previous crushing effort, The Grinding Wheel, new drummer Jason Bittner (Shadows Fall, Flotsam and Jetsam) joined the fold, which has only ratcheted up the group’s technical brutality and brought in a fresh perspective.

Overkill began its journey four decades ago when vocalist Bobby Blitz Ellsworth and bassist D.D. Verni made a New Jersey connection. Guitarists Dave Linsk and Derek Tailer have spent the last two decades hammering down the band’s muscular riffs. This continuity plays a huge role in the Overkill’s iconic sound and staying power. This week we spoke with Bobby about the band’s longevity, The Wings of War, his lasting friendship with Verni, his work with Metal Allegiance, and his propensity for shower singing.

It’s not just Overkill’s longevity that’s impressive, since you are now wrapping up your fourth decade, but its the consistency and relevance of Overkill’s music that astounds me.

“You just made me very proud. I’m blushing over here. I think pride is the element. Pride in current day relevance. I love talking about what Overkill is. What we are, not where we were or what we were. I think that’s why it continues at this level. It becomes a motivation to not just mail in the tracks, and put out ‘another one.’ It’s the idea  that you compete against yourself to put out something that’s morphed into something different, but still put the Overkill stamp on it at the end of the day. I think on the current record, that’s a good example for it. I think we’re going to have success with those elements of what motivates us.”

How have you and D.D. managed to balance the creative work life/friendship for 40 years?

“I think that, I’m not going to say first and foremost, but for sure there’s a part of our personalities is ball-busting. We have a good time. We’re the same type of people, and I think that works. We compliment each other very well. I think probably the main reason is you put the guy before the band.  You put the guy’s family before the band. His well being. If that happens, the band is pretty easy. I think if you go back over 35 years, any dirt that was started on Overkill was never started by Overkill. I think that’s kind of the way we like to live our lives. We present ourselves with one voice. We write because we like to write, we play because we like to play, and we keep our secrets to ourselves.”

Let’s talk about the new record. Obviously Jason Bittner adds a new dimension to the sound with his energy and stylistic approach. How did the creation of The Wings of War  feel different to you? 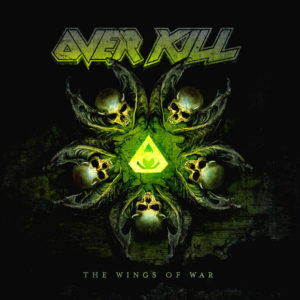 I knew this was going to change, I think it was in like late May or June of 2017 when he joined the band. We were in Moscow. We were about three songs in and I’m like, ‘this is different.’ You can embrace that change or force it into a different direction. I think that what we did was we embraced it. We became part of it.  So we were really optimistic by the time we got to the studio that what he had to offer was, in that way of surgical brutality and precision that he plays in, was going to give us other places to go. So we got excited that we were going to be able to branch out as individuals within the band. As Jason started playing the songs started morphing, changes started happening. They started out as these simple compositions that turned into more complex presentations. Dave and I, and even D.D., started to see the spots that we could add melody. So you have this brutal precision on one side and this melodic yet rhythmic approach on the other side, which creates a third entity. So I think that Jason had a lot to do with the final outcome based on his style, the change he brought to the band, and the rest of us embracing that change.”

I wondered if it was similar in line to Richie Faulkner joining Judas Priest. Just bringing that new person in has some new energy and enthusiasm, and reinvigorates you guys as well.

“I can’t speak for the Metal God and his entourage, but I know that for sure, a new guy comes in, he’s the most enthusiastic and it calls you on your shit. You’re going, ‘look at the fucking new guy. He’s the most excited one about everything. I’d better ramp this up a little bit.’ So it becomes for sure motivational with regard to just comparison. Somebody’s coming into the band with wide eyes saying were going to tear this place to shreds, and were like you’re damn right we’re going to tear this place to shreds. It was a good little dose of energy that he brought to us.”

One of my favorite tracks is “Bat Shit Crazy.” tell us about that one.

“‘Bat Shit Crazy,’… just the title itself is a winner. How did it take us 19 records to come up with something that’s synonymous with us?  When I hear that song, the composition of it, the arrangement of it, it reminds me of something that happened earlier in my life. Maybe somewhere in the early 90s, right down to a bit of the production, and how the relationship between the drums and the guitar are. Dave’s got a thick fucking guitar sound for 2019. He doesn’t have that squeaky high-ended guitar. He has that 1990’s scooped-out guitar that has that relationship with the kick drums. It’s holding up the low-end. That, to me is what said that this is old. Once we got through the production, I said it’s like old, but it’s got a fresh coat of paint on it. That’s the beauty of it. It’s like a classic car that’s been repainted. That’s kind of the way I look at the tune. When I got to the lyrical content is was just like, ‘Where the fuck did common sense go (laughs)? Who the fuck shot common sense when we weren’t looking? So just in general its sort of a social commentary on the current day, without naming names.”

Overkill has always had sort of a playful side and a serious side. How important is that balance?

“We enjoy this. I think the key is to not takes yourself too seriously. Of course take your presentation, your recording, and try and present it at a higher level than you are, and go to the mat to get what you want to present it at a high level. Not just a bullshit video or shit production. If you make mistakes, don’t repeat those mistakes. But on a personal level, if you start taking yourself too seriously, it’s exhausting I would think. We’re lucky enough guys to have worked in Levis and engineer boots for many years. This was kind of the dream. So to fuck the dream up with ego or paying attention to shit that is not important…it gives us more time to enjoy ourselves and pay attention to the music.”

You can listen to the full in-depth interview with Bobby Blitz below, check out the first two videos from The Wings of War, and prepare for the band’s upcoming Wings Over the US tour with special guests, Death Angel and Act of Defiance.

WITHIN TEMPTATION Interview: Sharon den Adel on the futuristic sound of ‘Resist’