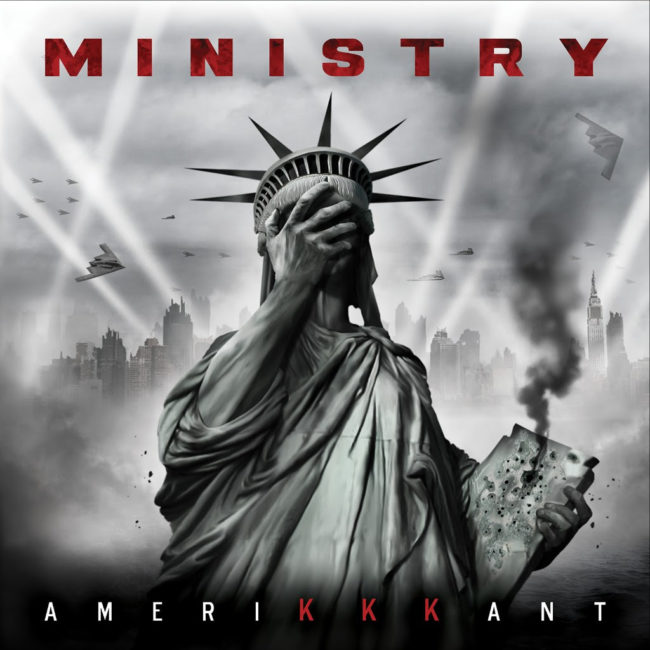 Ministry‘s provocateur-in-chief Al Jourgensen has assembled an ultra-cool number of all-star guest musicians for the band’s 2018 North American tour that kicks off March 22 at the House of Blues in Anaheim, CA.  The tour is in support of the band’s upcoming album, AmeriKKKant, set for a March 9 release (Nuclear Blast).

‘It’s called ‘AmeriKKKant‘ because we can’t keep going down
the road we’re on.’
— Al Jourgensen

For these dates, Ministry‘s will present a whole new set list that will include more new songs from AmeriKKKant.  Said Jourgensen, “Old friends, new music…Dream lineup, nightmare world.  Get your ass to this show…this one will be memorable.”

With his “P.T.-Barnum-meets-Rage-Against-The-Machine” ringmaster style, Jourgensen will front this motley crew of killer musicians, along with giant inflatable Trump chickens, video screens projecting politically-imbued images to compliment the music, and a couple of Antifa soldiers.

I am very honored to be part of Ministry‘s ‘all-star’ crew for the upcoming ‘Amerikkant‘ tour,” said Burton C. Bell. “Working with Al over the years has been a blast and a dream come true, and to be part of another Ministry album was another milestone in my career.  Hanging, laughing, playing with AL, JB, Sin, Cesar, Tony and Joey is always a good time. I’ve known all these characters for some time, and they will never get old! I expect this tour to be super fun. Like the songs goes, “my whole life is making music with my friends, and I can’t wait to get on the road again..”

This looks to be a landmark tour with an amazing lineup and a killer new record,” added Joey Jordison, “and we look forward to these shows and celebrating a new chapter in the history of Ministry.  But more importantly, the current status and future of Ministry‘s music and legacy.  So, to the past, present and most importantly to the future, stay alert as this is not to be missed and we hope you will join us at these shows. We’ll see you on the road very soon.”

Dates for Ministry‘s upcoming tour are as follows: