A lot of metalheads think they are special because of their supposed ability to comprehend and appreciate the subtleties and extremes inherent to the art form.  I know this because I’m one of those people and over the years I’ve endured the confused and disinterested stares of more than a few people as I’ve regaled them with inane ramblings on esoteric song structures, the importance of a strong visual component through the use of album art, or the brilliance of some bizarre genre-bending concept album.  What can I say?  I love the complex side of metal and rock and for this I make no apologies, but every now and then an album comes along and reminds me of the beauty of well executed simplicity.

Comprised of drummer Jeff Silva and guitarist/vocalist Ben Harwood, Seattle’s Hobosexual released their self-titled debut in 2010 followed by their sophomore album entitled II in 2013.  Billed on their Bandcamp page (where they also sell action figures—seriously) as “2 beards, 4 amps, and more raw talent than Jesus” the band quickly garnered a rabid following thanks to a modern hard rock sound heavily steeped in 80’s kitsch.  Although their music landed on a few episodes of Showtime’s Shameless, as well as on nationally televised Seahawk’s games, Monolith serves as my introduction to the band outside of the fact that I was generally aware of their existence because—let’s face it—“Hobosexual” isn’t a band name one tends to forget once you see it in print. 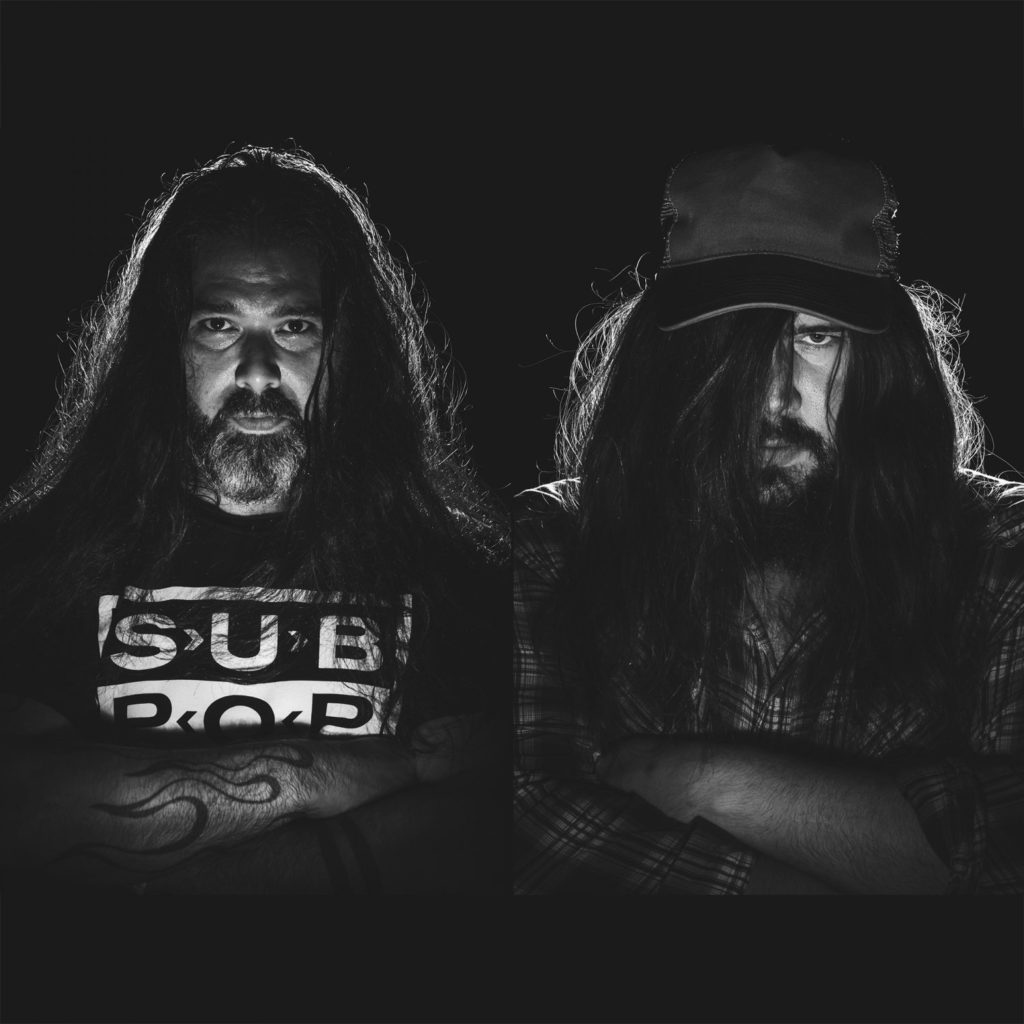 Perhaps the most unique virtue among Hobosexual’s many, is their ability to maintain an underlying simplicity while weaving together a wide variety of sonic tapestries, as they readily demonstrate across Monolith’s 44-minute run-time.  This dynamic, however, plays itself out between songs as much or more than it does inside of the individual songs themselves, and perhaps the best example of this exists across the album’s first two tracks.  Album opener “Trans-Am Sunday” features vocals that sound like something Liam and Noel Gallagher could dream up if they stopped being assholes long enough to cut a new Oasis record (not that anyone wants that) interspersed with the most triumphant shoegaze riff you’ve ever heard.  Hobosexual could probably make an entire album like this and be hailed as alt-rock champions, but then they go ahead and name the album’s second track “Monsterbator” and pummel your ears with a song that sounds like what you’d expect if an AC/DC tribute band wrote and recorded an original track to sneak into their live set, if that band was fronted by a guy who A) also sings in a Led Zeppelin cover band and B) once won a karaoke competition with a rousing rendition of The Darkness’ “Get Your Hands Off of My Woman”.

When I say that Monolith’s versatility is demonstrated between songs rather than inside of them individually, what I’m really trying to say is that Monolith is loaded with song structures that can be charitably described as simplistic.  Most of these songs don’t really have proper verses and choruses, and most feature only one or two discernible riffs atop Silva‘s massive drum sound.  A lot of 2-piece bands—like Big Business for example—tend to settle into a familiar sonic signature across songs and albums, which has the unfortunate side effect of amplifying the shortcomings of having only 2 members.  Hobosexual generally manages to avoid this pitfall because they never sit still long enough to allow the dust to settle on their sound as they fist-pump their way from one song to the next.  Much of this is due to Harwood’s vocal range, which is really quite impressive.  At one moment he can evoke the likes of Maynard James Keenan’s Puscifer vocal stylings, as he does on “VHS or Sharon Stone” (the lyrics on which sound like something Beck would write if he was limited to only using 80’s references as source material), and the next he’s displaying a nearly Cornellian (RIP) depth of range, as he demonstrates on the album’s title track.

Lyrically, there’s nothing here that seems to warrant in-depth analysis, which is clearly the point and well in keeping with the fast and loose “don’t overthink it” aesthetic one gets from Monolith as a whole.  And that’s just fine because Monolith is as fun as it is diverse, and while I’m tempted to further strip the origins of Hobosexual‘s sound down in an attempt to identify the various genres from which it undoubtedly borrows (as I am wont to do on occasion), I see no value in that exercise here.  There is little doubt that Hobosexual borrow from various well-worn (tired, even) influences to define their sound, but what becomes abundantly clear in listening to Monolith is that their motivations for doing so are as unconventional as the results.  At a time when most bands approach genre-melding as a sometimes over earnest attempt at forging the next “it” sound, Hobosexual seems more interested in hurling some of those same conventions against one another for little more than the pure joy of watching them smash into each other and explode on contact.

Hobosexual is the musical equivalent of that rowdy neighbor kid your parents hated because he’d rather blow up his toys (and yours) with firecrackers than actually sit in the sandbox and play with them.  You should listen to Monolith…maybe…just don’t tell your folks.