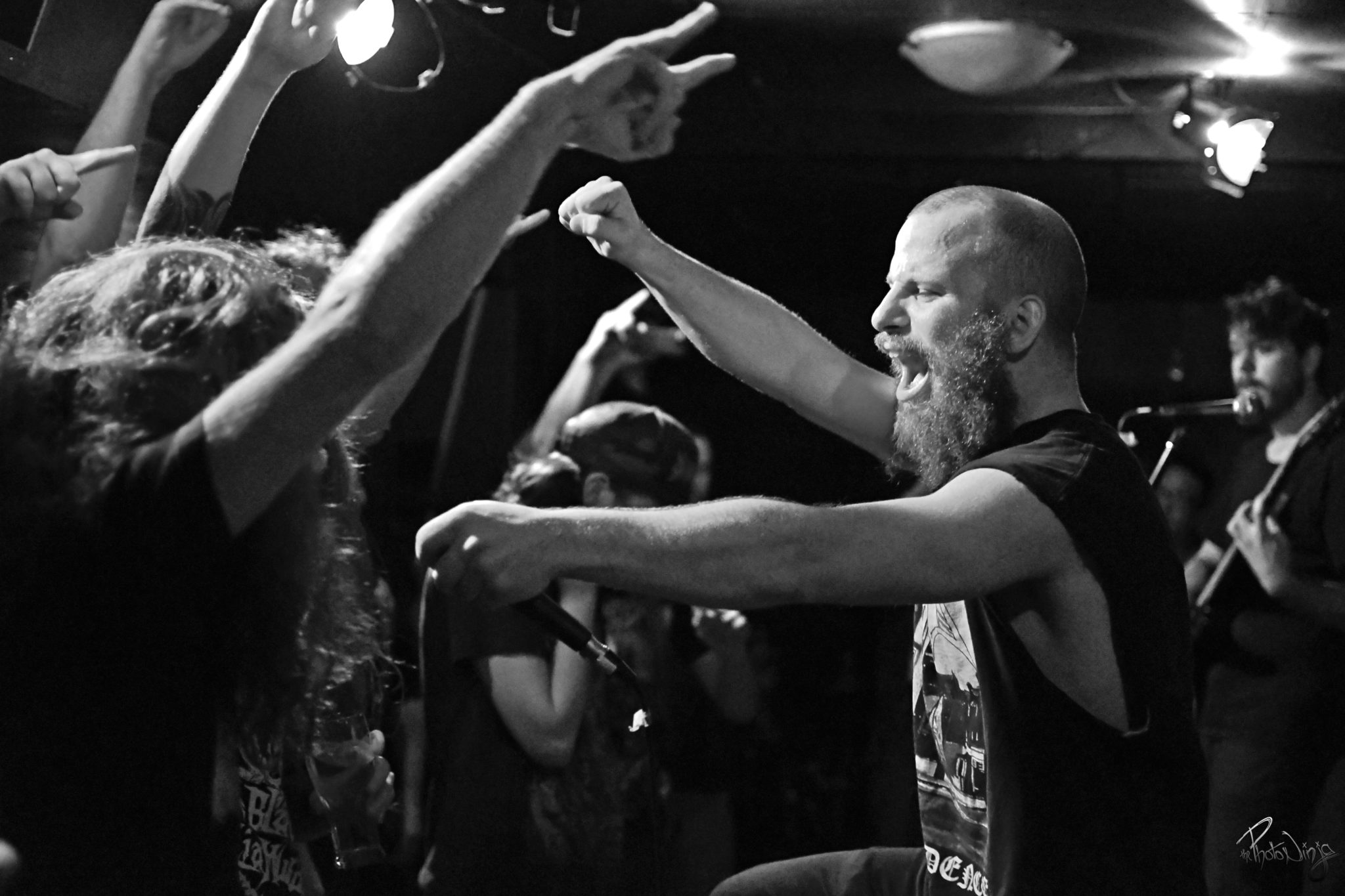 In late June, Reading, Pennsylvania’s Rivers of Nihil kicked off the northern part of a tour in support for their newest release, Where Owls Know my Name.  The second night, June 29, found them in Halifax, Nova Scotia bringing their brand of innovative death metal along with tech-death metallers Inferi and AlterBeast.  Metalheads packed into the Oasis Pub and Eatery, cramming themselves together to catch the intense live experience these three bands are known for, and intense it was! 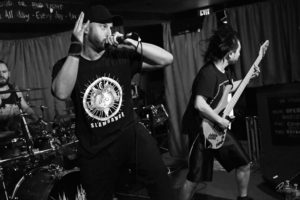 It was a hot humid night in Halifax but it did not stop the metal fans from piling into the stuffy basement venue at the Oasis for a night of face-melting music. Hailing from Nashville, Tennessee, Inferi kicked off this show with an intensity that set the stage for the rest of the night.  The crowd was very into their heavy brand of technical melodic death metal. Inferi were balls out heavy from the moment they played the first note and it did not let up throughout their entire set.  It was a sonic assault of high energy metal with precision execution and superb musicianship. Their drummer, Spencer Moore, was tight like a machine but still oozed rhythm maintaining the groovy feel of the technical, heavy tunes. 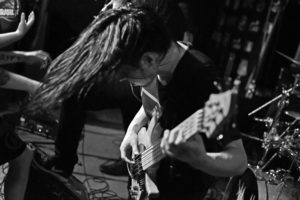 This was my first experience with Inferi, but there were definitely some fans of the band in the audience, who placed themselves right up against the stage, singing, or screaming rather, along to the lyrics.  There was even a few instances where vocalist, Sam Schneider, shoved the mic into the face of someone in the crowd for them to finish off the line. I was very impressed with the way the band interacted and engaged with the crowd, often thanking us for mirroring their intensity right back to them. Very solid performance! 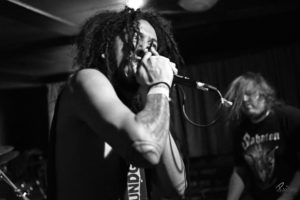 Travelling from California to Nova Scotia is no small feat.  Not to mention the climb north, it’s also all the way to the opposite coast of North America.  Needless to say, the love displayed to AlterBeast hopefully showed the band that Halifax was certainly grateful of their efforts in travel!  Their set was another sonic onslaught from start to finish, complete with the crowd begging for just “one more song!”  The intensity of the mosh pit was of a level I have not seen at this venue and, really, only at much larger performances.  The tower of speakers was getting bumped and shaken regularly as they were resting on the floor, but thankfully the courteous pit-goers managed to keep them safe.  That’s more than I can say for one particular mosher who came out unaware of the blood splattered all over his face.  I first noticed drips on his sweat soaked white tee and after someone pointed out his face to him, he wiped some of it off and then onto the remaining whiteness of his shirt, only to then head back toward the pit with a smile on his face. 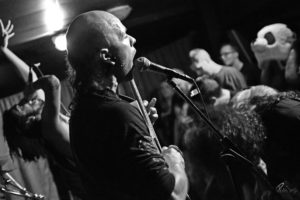 One of the highlights for me in AlterBeast‘s performance was what I call knee-bucklers.  Moments where the riff builds, takes a small, momentary breather before jumping into a new riff at half, or even quarter time from the previous riff. The heads bang along, the fists pump in unison and the knee’s buckle with the groove.  You could almost swim in the communal sweat at this point of the night, and we still had yet to experience the headliners. 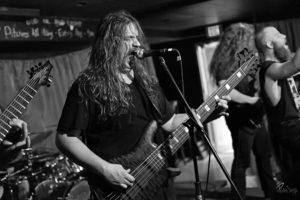 After a short break to change up some gear, Rivers of Nihil hit the stage.  I made sure I had a good spot for this one as I made my way up to the side of the stage.  Even still, I was faced with the onslaught of the mosh pit, but it did not keep me from enjoying the show.  The set was filled with an array of old and new Rivers’ tunes with selections from each of the three full length albums.  The audience ate it up, and went back for seconds!  the pit increased, the amount of folks singing along doubled, if not tripled, and you could tell that the band fed off this energy as well.  Their performance was solid, precise and emotive. 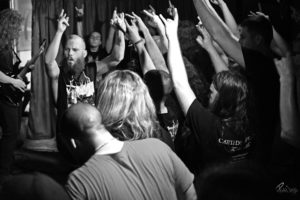 Being on tour with two blisteringly heavy bands, Brody Uttley from Rivers of Nihil expressed their initial concern for touring in support of their newest release, Where Owls Know My Name, which contains more melodic and mellow moments than their previous two releases.  Despite these concerns, their touring response has been overwhelmingly supportive and positive.  The fans are appreciating this new direction and showing their love.  Halifax was no different.  One of the highlights for me was watching the face of vocalist Jake Dieffenbach, who was very obviously soaking up the crowd response, frequently making contact with the fans who were crammed in front of the stage in this very intimate venue.  More than once he met his forehead, as well as the top of his shaved head, with the heads of a few of the audience members, and even once taking a fan onto the stage and handing her the mic so she could sing the tune in his place. It was very clear that the love was felt and appreciated.

This was a great night, stellar performances from the bands, along with a very excited and engaged crowd reaction.  There are a few more stops on this tour, and then a whole new one starting in September with Revocation, Exhumed, and Yautja.  If you have the chance, make sure you go to one… you will not be disappointed! 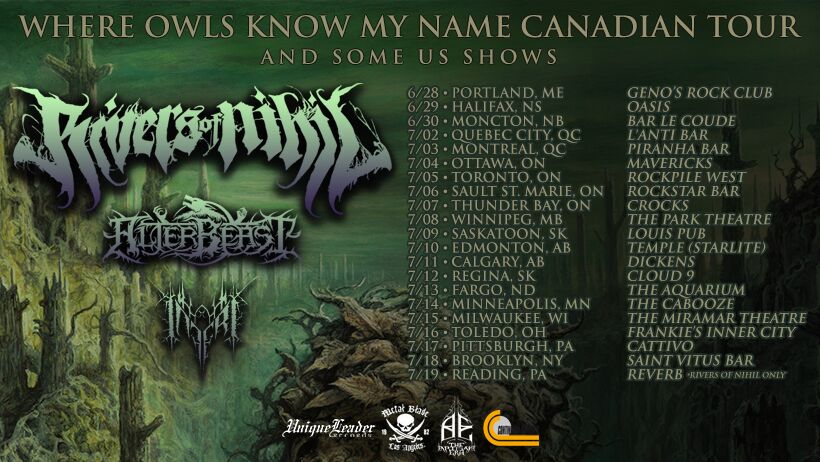 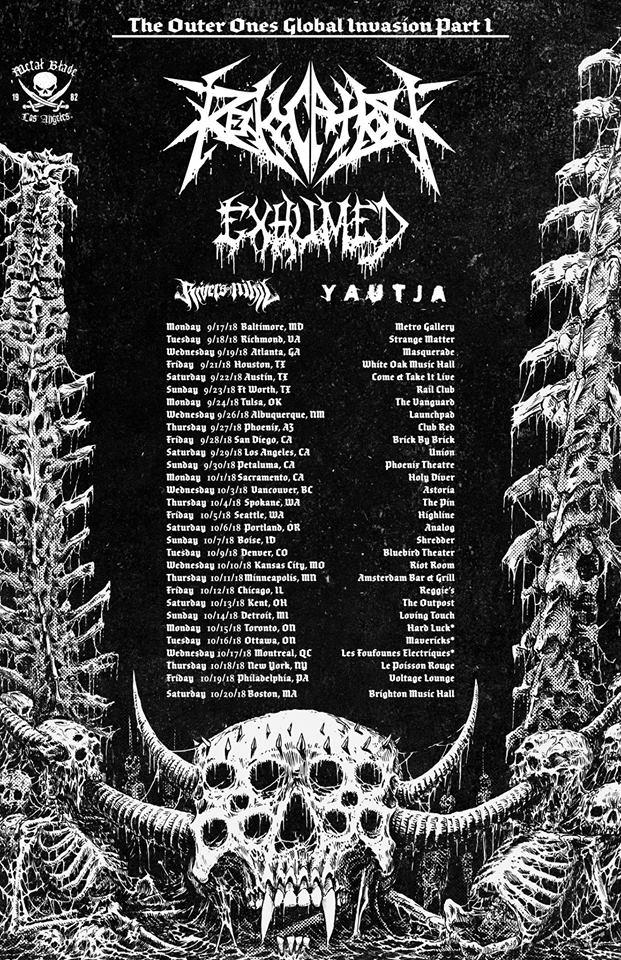 Big thanks to The Oasis Pub and Eatery for hosting, as well as Morbid Entertainment and Red Tentacle for their promotional efforts in making this happen.  All photos © 2018 by Alicia Montague The Photo Ninja.