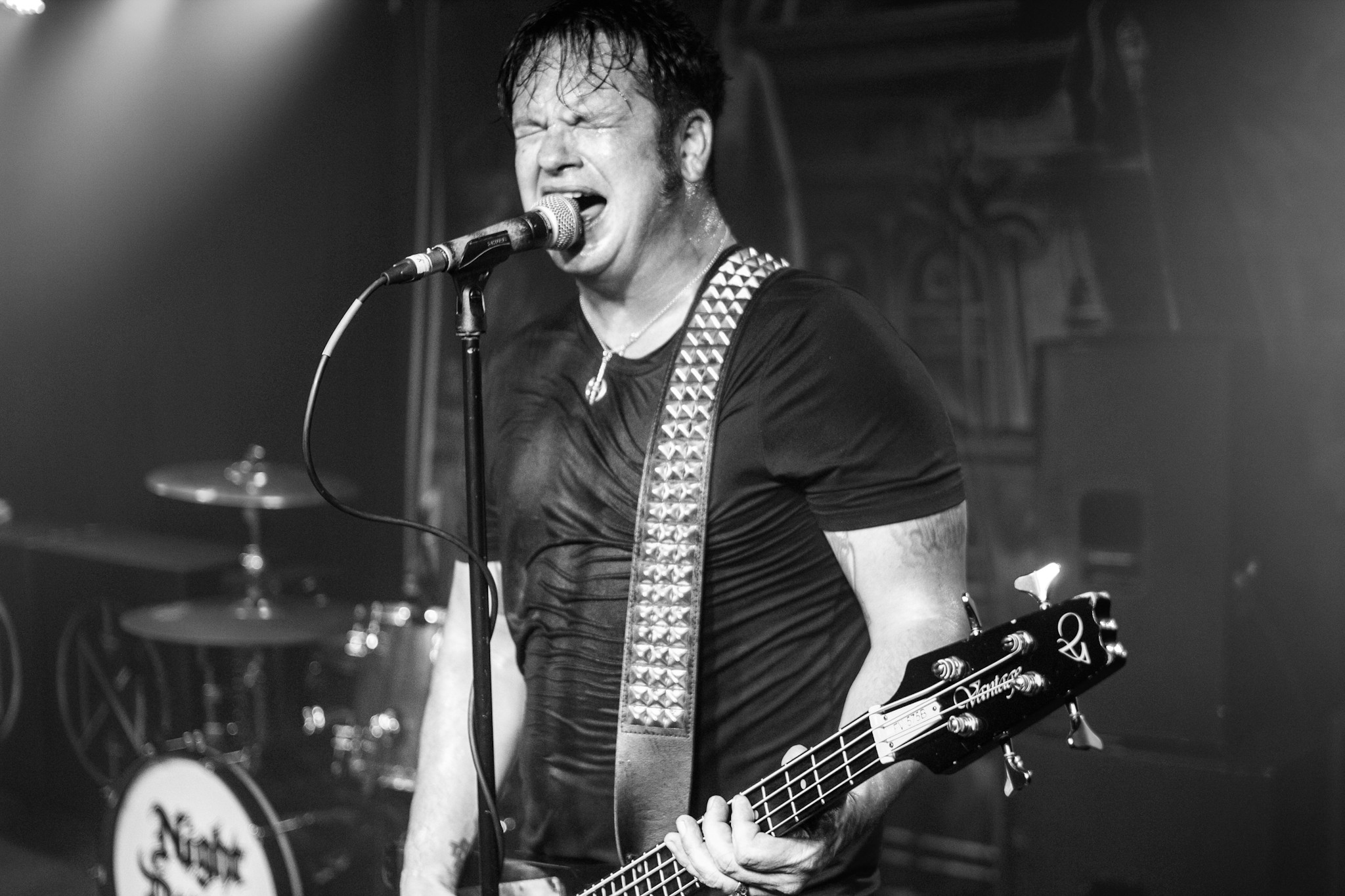 Usually on a Wednesday night, one would be at home after a days work, listening to music or enjoying dinner with a nice movie. I, myself, would be listening to music or spending the evening carting my children around to their various activities that they partake in. However, this wasn’t the case for the Wednesday falling onto August 15th, as the explosive heavy metal band Night Demon were gracing themselves upon Kansas City, with their main support, Blood Star, opening up for them.

I’d experienced Night Demon before in the past, about two times if I remember correctly. Each time, they decided to take their act to The Riot Room, a venue I’ve covered many times before and has basically become a second home for myself and others. Night Demon has managed to garner quite a bit of attention to get it filled up over the years and this night was no exception. Although there was a comfortable energy to the room that night, there were definitely some surprises to be had, especially with the opening act in the newly formed heavy metal band Blood Star.

Blood Star hails from Salt Lake City, Utah, playing heavy metal similar to that of Night Demon, but with Madi Smith at the helm of the beast, with strong yet charismatic heavy metal styled vocals. Salt Lake City is known to house many great bands, including one of my favorites, Visigoth, and tonight Blood Star showed that they very much belong to that exceptional scene. Their music mainly comprised of medium-paced and riffy heavy metal paying homage to the greats of the past. While they don’t have any music out there just yet, they played many of their own originals as well as top-notch covers. Fog spanned the entire stage, giving off a mysterious and elusive vibe that matched their persona. Their stage presence was magnificent and truly showed how experienced they were even though they are relatively unknown to the scene up to this point. They were perfect openers for Night Demon, setting up the stage perfectly for the heavy metal that was to follow them shortly.

Night Demon , touring in support of their beastly new album Darkness Remains, took the stage soon after, with an explosive entrance. Everyone were immediately banging their heads in time with the band, some having already made their way to the stage to partake in the festivities. Frontman Jarvis Leatherby sounded at his best, belting out powerful vocals on top of his thunderous bass lines. He was clearly aiming to dominate the stage with his presence from the get go and had no problems doing so. Armand Anthony played magnificent guitar solos, with the crowd worshipping his shredding skills, constantly bowing to him and his guitar as he played. Every minute was on fire, with both Armand and Jarvis constantly taking the helm during each song, moving the crowds view from side to side constantly. Drummer Dusty Squires wasn’t always at the center of attention but he played brilliantly, not missing a beat at all. He commanded the percussion with utmost aplomb and was definitely a favorite of mine from the evening. Night Demon were at the top of their game tonight, being the most energetic I had seen them. I’m not sure exactly what had changed from the previous shows, but I’m sure glad it happened as I thoroughly enjoyed every single moment of the night.

Both bands pulled out all the stops with their sets in their own ways. While being classified as heavy metal, they each had their own identity and style that compliment one another quite well. Blood Star easily made new fans on this tour, especially with me, and hopefully continue to garner support. Their talent is remarkable and they deserve to be on future tours with well known heavy metal artists. Night Demon brought out old and new fans to the venue, hopefully spreading the word even more about themselves. All in all, heavy metal was alive in Kansas City this night, and shows no signs of stopping either. These are the kind of nights that really shine, seeing metalheads come together just to rock out and have a good time.

Night Demon unleashed its triple live album, Live Darkness earlier this month. If you want to capture the magic of their live performances, pick up a copy now.