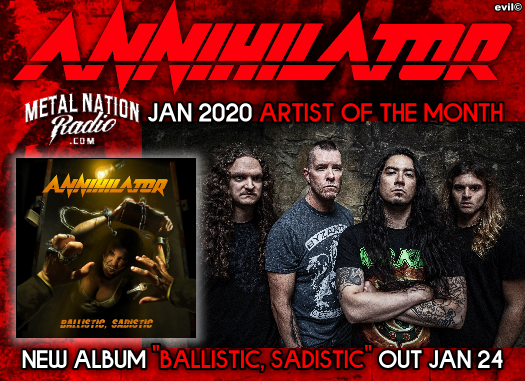 Annihilator is a Canadian thrash metal band founded in 1984 by guitarist Jeff Waters and vocalist John Bates. They are the highest-selling Canadian thrash metal group in history, having sold more than three million albums worldwide, although most of their sales have been generated outside the band’s home country.

Along with Sacrifice, Voivod and Razor, Annihilator is credited as one of the “Big 4” of Canadian thrash metal.  They are also considered to be part of the second wave of thrash metal bands from the late 1980s and early 1990s, along with Sepultura, Sacred Reich, Flotsam and Jetsam and Dark Angel as well as Bay Area thrash metal acts Testament, Forbidden, Death Angel and Vio-lence.

Since its inception, Annihilator has released sixteen studio albums and has undergone many line-up changes. Waters is the only remaining original member left in the band, and usually assembles touring or session musicians to perform with him. Annihilator’s first two studio albums—Alice in Hell (1989) and Never, Neverland (1990)—are considered to be influential Canadian heavy metal records.  Many of their later albums—including their third, and only major-label, album Set the World on Fire (1993)—also received high praise from critics, and enjoyed some success in Europe and Japan.  Their recent studio album, Ballistic, Sadistic, will be released on January 24, 2020.